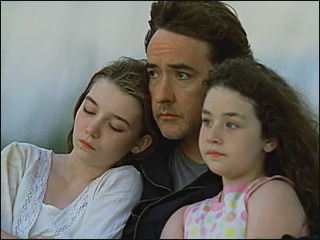 Written and Directed by James C. Strouse, Grace is Gone tells the story of a father (John Cusack) who learns that his wife was killed in action in Iraq, and being unable to express his pain or find the right words, decides to take his two young daughters on a road trip before telling them.

Stanley Phillips (Cusack) is a soft-spoken father who is home raising his two young daughters while his wife is serving in Iraq. They live in a small Minnesota town and Stanley manages a Home Store during the day while his girls are at school. His oldest daughter, 12 year old Heidi (Shelan O’Keefe), sneaks around trying to watch news broadcasts of the war against Stanley’s wishes while he isn’t home, and is struggling to stay awake in school. Stanley is somewhat estranged from his daughters, and doesn’t always know how to talk to them. So, when he is informed his wife was killed in action, Stanley decides to take the girls on a road trip to “Enchanted Gardens” in Florida before telling them of there mother’s death.

On the road trip, Stanley brings the girls to his childhood home, where we meet his brother, John (Alessandro Nivola). John and Stanley disagree on the war and the way the government is running things, and its here where we first see Stanley start to snap. We also learn that Stanley met Grace in the Army, and why he was discharged in these scenes with the brother. After John gets a phone call about Grace’s death, he questions Stanley’s reasons for not telling the girls the truth. Heidi also begins to suspect something is wrong, and tries to pry information throughout the film. Myself, I had the impression that Heidi suspected the truth from the beginning, and its a true testiment to the superior acting performance given by O’Keefe.

Younger sister, 8 year old Dawn (Gracie Bednarczyk), is bouncy and cheerful, and is seemingly oblivious to whats going on and is concentrating on getting to the theme park. Perhaps the most adorable thing in the film is that Dawn sets her watch at the same time as her mother everyday, that way they both know the other is thinking of them at that moment. So, when we the audience know Grace is dead, and see young Dawn continuing this ritual to think about her mother, our hearts simply fill with pain for her. However, the relationship between Stanley and Heidi is what carries the film, and is an intelligent move in the script. Heidi is old enough to begin questioning things and has curiosities that simple parenting answers can no longer satisfy. Heidi questions Stanley often, and he comes to realize that while Grace has been away, that he has alienated himself from his daughters and hasn’t paid attention to there needs. So, in going thru this drama, Stanley begins to learn how to be a better father.

The film is tremendously slow, but not very long (1 hour and 24 minutes). It also spends a lot of time inside the family car, as the movie is essentially a road trip movie, which can get boring at times, but its also where a few key scenes of dialogue occur. Despite this, the film is very good, and very touching to see this side of the tragedy so many families are dealing with on a daily basis as this war continues. Cusack is simply amazing in this film. He has moments that simply melt your heart, such as calling the family answering machine just to hear his wife’s voice again. The emotions he allows himself to portray are powerful and the chemistry he has with young Shelan O’Keefe is tremendous. She also is very good in the film, portraying a young girl realizing that the world isn’t always black and white as she thought it was, and for the first time begins to step outside of the box. Both in her actions and her thinking. The younger girl, Gracie Bednarczyk, is simply adorable. She has few moments when she is required to give any emotion besides giddy young girl, but when it gets to the moment that Stanley has to finally tell them, she and O’Keefe both do a great job of selling there sadness.

You know what you’re getting when you sit down to watch this kind of movie (sad drama), but don’t let that scare you away. It is a touching, powerful drama that is highly recommended.

Top 10 Movies Still To Be Released in 2011, That-You-Might-Not-of-Heard-About-Yet, a Mr. E Special Countdown.