“Alvin and the Chipmunks” 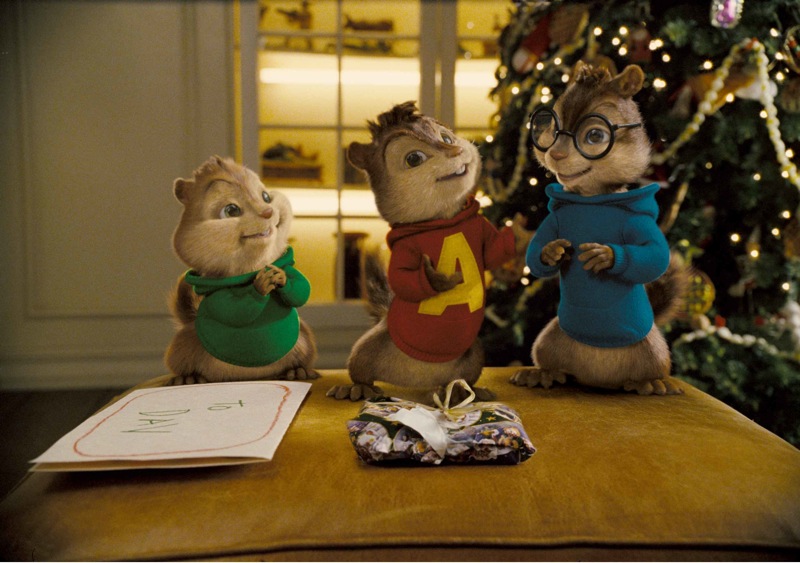 Ever have such low expectations for a film,  that you figure it couldn’t possibly be worse than what you’ve imagined in your own mind? “Alvin and the Chipmunks” was that kind of movie for me, and it was infact worse. I had zero desire to see it, and was in some ways offended that they did make it all. I have some fond memories of watching the cartoon as a kid, and like most others growing up at the time, I had quickly moved on to He-Man, Transformers and Ninja Turtles before too long, but I still do hold at least some small spot for the Chipmunks in my heart. Mostly, I love…and I mean LOVE “The Chipmunk Song” around Christmas time, and so with no expectations and little else to do late on a rainy afternoon, I sat and watched this movie with my mother.

The film, like the cartoon, is the story of struggling writer, Dave Seville (Jason Lee), who stumbles across three talking-singing chipmunks and decides to become there manager and song-writer. The chipmunks, including charismatic Alvin (voiced by Justin Long), brainy Simon (voiced by Matthew Gray Gubler) and always hungry Theodore (voiced by Jesse McCartney), become an overnight sensation and start selling out records left and right. Soon they are (naturally) corrupted by the power and riches that comes with there fame and are tricked into leaving Dave and going along with Music executive, Ian (David Cross), who has cruel plans to cash in on the Chipmunks talent. While this is going on, Dave also tries to win back ex-girlfriend (and neighbor) Claire (played by the lovely Cameron Richardson).

The main problem with the movie, as mentioned already, is that it exists at all. The same problems could be found with the recent Dr. Seuss adaptations, basically that the story doesn’t support even a 90 minute film without adding “fluffer” to it. Notice that the plot of the movie took all of 4 or 5 sentences to describe? Thats all there is. To fill in the gaps we have an intro scene of the Chipmunks singing one-hit-wonder “Bad Day” (from future VH1 star Daniel Powder) before there tree is cut down and conviently brought to the music offices that Dave visits moments later. Long sequences of the Chipmunks causing chaos, destroying things and playing with toys also take up long scenes for the kids to enjoy, and it becomes obvious that the only people who would enjoy this movie still have problems with sounding out vowels.

It also falls into the trap of modernizing the Chipmunks. They sing and dance to hip-hop music and have skantly-clad back up singers. They breakdance and wear those stupid track suit outfits that people seem to think is cool. Jason Lee also seems helpless in this film, often looking in the wrong spots or just sounding bored in his dialogue delivery. It’s a curse of the green-screen process, and painfully its obvious when it doesn’t work, like in this film. The visual effects, basically the look of the Chipmunks themselves seemed way too cartoonish. That may sound absurd to say, being that it is a kids movie, but in a world where I can watch “Lord of the Rings” and believe Gollum is walking along with Frodo and Sam, or believe Harry Potter is actually flying along on Buckbeak, you’d have to hope they could have more believable Chipmunks in the movie. Instead it seems they settled for making them cute and cartoony, which they are, and that is all they need to be for the target audience of this film, who will no doubt beg mom to buy all 3 Chipmunk stuffed animals on the way home from the cinema.

But what was really disappointing is that the movie had no heart and no originality. It’s “family is most important” message seemed over the top and like a dozen or more after school specials. A good family film will get its message across less deliberately, and not try to hypnotize kids with flashy Chipmunk dance sequences for 80 minutes and then attempt to forcefully spoon-feed a heartwarming message of family the other 10 minutes. Don’t know what else I would’ve done, but (again) I wouldn’t have made the movie to begin with, despite my fondness for the Chipmunks from my childhood. There comes a time when movie producers should draw a line with all these movies from yesteryear being remade or reinvented. Memories are great, but some memories should stay just that…memories.