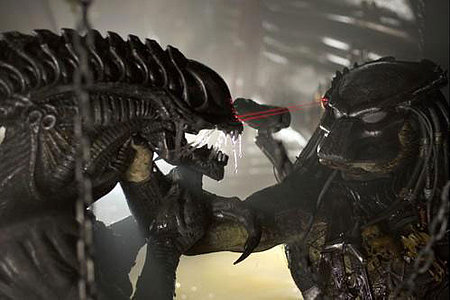 When we last left the two warring alien races, a group of the Predator’s were blasting off with there dead comrade, and shortly after we saw an Alien-Predator hyprid burst threw the dead soldier’s chest before the credits rolled. In the opening frames of the sequel, “AVP: Requiem”, the hybrid grows up quickly, kills several Predator’s and steals a shuttle and heads back to earth. Why? Who the hell knows, but it’s apparent that its not very important to the plot. The shuttle, now filled with gooey face-huggers as well, crashes in the wilderness outside a small Colorado town. A hunter and his young son are soon attacked by the huggers, and not long after newbie aliens hatch out of the father and son’s chest.

The film then spends most of the next hour pointlessly attempting to develop character arcs for the main human characters before the real carnage begins. We meet Dallas (Steven Pasquale), the silent tough guy with a checkered past, being picked up at a bus stop after apparently serving three years in jail. Picking him up is an old friend, and now town sheriff (John Ortiz), whose emotional range in the film most closely resembles wet cardboard. We cut to Dallas’ little brother, Ricky (Johnny Lewis), a high school student with unexplained pent-up aggression. Ricky is delivering pizza’s to the girl he has a crush on, Jesse (Kristen Hager) and her jock friends. After Ricky and Jesse flirt a little, the jocks jump Ricky and throw his keys into the sewer, thus giving the two brothers a reason to go down into them later on. Finally, rounding out the B-film cast is Reiko Aylesworth portraying a military mom just home from war and who is trying to reconnect with her daughter (Ariel Gade).

A search is conducted for the missing hunter and his son, and more people start dying left and right as the Aliens grow in numbers and begin invading town. The X-Factor is, of course, the Predator who comes back to Earth to hunt down and destroy the hybrid. Unlike in the first movie, where there were several Predators and they eventually fought alongside the humans, this lone soldier kills Aliens and humans with equal effeciency, and makes you wonder why they don’t just send a battalion of Predator’s in and wipe out everyone. About the hour mark is when the things you came to see start finally happening. Before that, all we really get is bad dialogue and piss-poor character scenes. In one truely awful and cheesy moment, Jesse strips down to her underwear after hours in the school pool and asks Ricky, “Now, are you looking at me, or the clock?” Aside from those raspberry worthy moments, all we get is very vague and very dark scenes (dark as in brightness, not subject matter) of the Predator hunting down Aliens or humans. The final half-hour is carnage city, as noone is really safe in this film, which would be more dramatic if we cared about a single one of the people in it.

Overall it is a total let-down of a sequel, and just a sad scene for these two proud sci-fi franchises. At least they attempted a plot in the first film, and devoted a lot of time to… I don’t know, actually having the Aliens fight the Predator’s. It’s in the damn title for gods sake. Once they do start fighting in this one, it does provide some minor entertainment value, but it is mostly just a poor rehash on the first film and dozens of other films just like them. In one partiuclar scene they rip off parts of “Aliens,” right down to the sound effects. The script is truely awful, and only on occassion does it even provide the smallest of chuckles. “That’s crazy, the Government doesn’t lie to people!” for example is a truely rare funny moment in the movie. There are much better things to do with your time and money than devote either to this film.