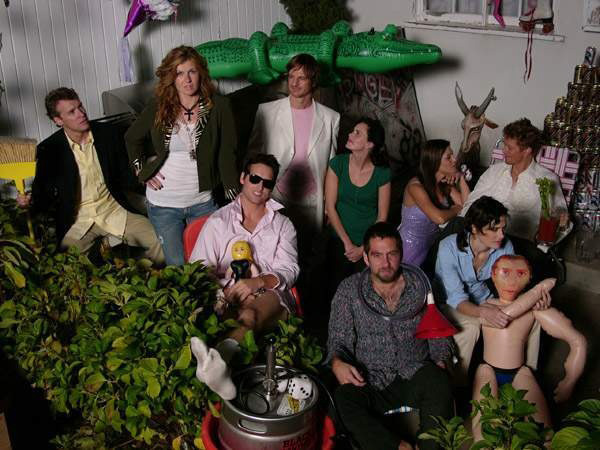 Okay, pop quiz: Which movie is about a group of life-long high school friends, now in there thirty-somethings, joined back together for a few days of drinking, gossip, old music and nostalgic banter about yester-year? If you answered “The Big Chill,” trust me, you’re not alone. “The Lather Effect” is the creation of co-writer and director Sarah Kelly, and is almost identical in plot to the ’80’s classic, and in a few scenes actually feels like you’re watching the other film. Instead of coming together for a friends funeral, the group comes together for one last party in the childhood home of Valinda (Connie Britton), and then in the subsequent day, while cleaning up after the party, the group of friends reminiscence on the past and complain about the present.

Valinda in particular can’t seem to let the past go, and is now married to Will (Tate Donovan), who is an overly-serious wet-blanket type and who gets upset with his wife’s constant need to dwell on what happened yesterday. The main burden on Valinda’s mind is an old flame, Jack (William Mapother), who is married to Zoey (Ione Skye) and has two kids. Seeing Jack again stirs up old feelings and reminds both of them of the way in which there high school romance ubruptly ended. While that quartet deals with those issues, we also have several others with equally unoriginal plot-lines to get us threw a 95 minute film.

There’s Claire (Sarah Clarke), who has left her husband and three kids behind in Ohio and flown out to this party with the direct intention of sleeping with an old flame, and then tortures herself in self-pity the rest of the film. There’s Katrina (Caitlyn Keats), the too-hot for her own good nympomaniac who just wants to find a serious relationship. Mickey (Eric Stoltz) who has apparently been partying non-stop since the ’80’s, but never-the-less manages to dish out Yoda-like advice to everyone. We have little brother, Danny (Peter Faccinelli), who still lives with older sis Valinda and is seemingly going nowhere with his life. And then we have Corey (David Herman), a former child movie-star who is now paying child support and pursuing nursing, and who feels mountains of guilt for his role in key events years ago.

The odd cast never quite seems to gel together in the way a group portraying life-long friends should. As in “The Big Chill,” the writers purposefully continue to seperate the group into smaller units of two or three for most of the movie, and its in those scenes that we learn most of whats going on. Perhaps the only noteworthy performance in the film is from Sarah Clarke as Claire. She manages to convincingly portray the depths of confusion and guilt the character is feeling after cheating on her husband so deliberately. A few other moments stick out, such as the David Herman character’s big reveal over dinner that throws the group into upheaval for the final half-hour, and Eric Stoltz’s explanation of the film’s title is rather humerous. Mostly the ensemble cast looks lost and the script muddled with too many regretful storylines and not enough time to flesh them out.

Obviously inspired by “Chill,” it unfortunetly falls well short of the magic and honesty produced in that film. Look no further than the tag line, “Sometimes the only way to get over the past, is to repeat it.” The question becomes, why?