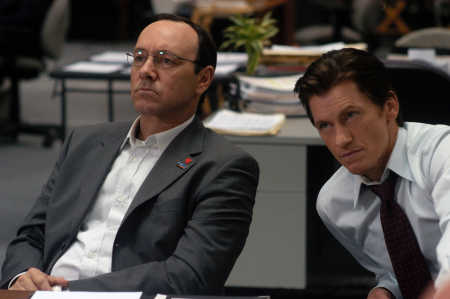 Director Jay Roach’s HBO produced saga of the days and weeks following the controversial 2000 Presidential campaign, and the subsequent recounts in the swing-state of Florida.

Al Gore is about to walk on stage and give his concession speech after apparently losing the 2000 Presidential campaign. Suddenly news trickels into both Republican and Democratic campaign headquarters that something is wrong with the count in Florida, a major swing-vote and run by Republican Jeb Bush, brother to candidate and apparent President elect, Governor George W. Bush of Texas. It is well after 3am, and both camps hussel to find facts and frantically begin dialing phones. An aid to Gore is tasked with flagging down the Vice-President and preventing him from making his concession. Amazingly, this is only minutes into the film and plays as well as any other political thriller to come along in years, probably since “All the Presidents Men.” Gore is stopped, calls Governor Bush and retracts his concession call earlier and thus starts the most controversial, unorganized and out-right wacky Political mess this country has seen in many years, possibly ever.

The two camps immediately start jabbing at one another, mostly thru the press and begin essentially “drawing lines in the sand,” forcing people to choose sides in the historic debate. Kevin Spacey stars as Gore’s former chief of staff, Ron Klain, and is thrust into the circus of interpreting laws, recalculating votes and winning over the press and politicians. The film throws a lot of facts at you, but it never seems overwhelming, infact it is truely fascinating to get an idea of what happened behind closed doors 8 years ago. Never could we realize how dirty it got, on both sides, and the lengths both camps went to try and win this presidency. As facts are being thrown at the viewer with each passing scene, we are also reminded of how truely insane it got down in Florida. Remember Jesse Jackson? How about the costumed protesters? How about the death threats to the officials in charge of the recount? We also see the airplane banner reading: “Surrender Gorethy,”  and its about that time you might start thinking some of this is added by Hollywood scriptwriters with too much imagination. However, just as you may be thinking that as you see the banner or a protester in a Grinch costume, carrying a sign reading, “How the Gore-inch stole Christmas!”,  the film cleverly cuts to archived news footage from CNN or other networks to remind us that, yes, this is indeed how pathetic it got at times.

The film gives us a behind the scenes pass at how dispicable this campaign got, and how ridiculous some of the rulings were. It does a fair job of balancing both sides of the argument, but does lean slightly to the side of the Democrats and we’re obviously meant to be rooting for them as we watch the film. Mainly, this is because the film focuses a bit more on Klain’s camp, and does seem to portray the Republicans as the villians of the story, complete with darker offices, suits and background music. Regardless of who you voted for in that particular year or which side you believe was right, the film is still enjoyable and debut screenwriter Danny Strong does a remarkable job of moving this thriller along at an electric pace. Although we all know the outcome, you can sometimes find yourself hoping Gore’s camp would recieve enough time to count all the votes. That is the most drilled home message of the movie, spoonfed on more than one occasion by a riviting Kevin Spacey, that each vote counts and should be counted.

“Recount” is an insightful political thriller with truely amazing performances. Laura Dern does a remarkable job of displaying the looks, cadence and inexperienced fear of Secretary of State, Katherine Harris, right down to the helmet hair-doo and makeup that would make a prostitute jealous. Tom Wilkinson brings his presence to the role of James Baker III, the lead lawyer of the Republican camp. His ruthlessness is well portrayed, and is perhaps the most telling sign that the film isn’t quite as in the middle as it wants its viewers to believe. Other notables in the film include Dennis Leary, Ed Begley, Mitch Pillegi and John Hurt. The cast is well rounded, and each gives a great performance, lending to a wonderful bit of tense, political madness. From its opening frames of confused elderly voters in Florida, to its final mellon-cholic scenes in the defeated Gore camp, the film is truely a great pleasure to watch.

The Ultimate Game of Clue