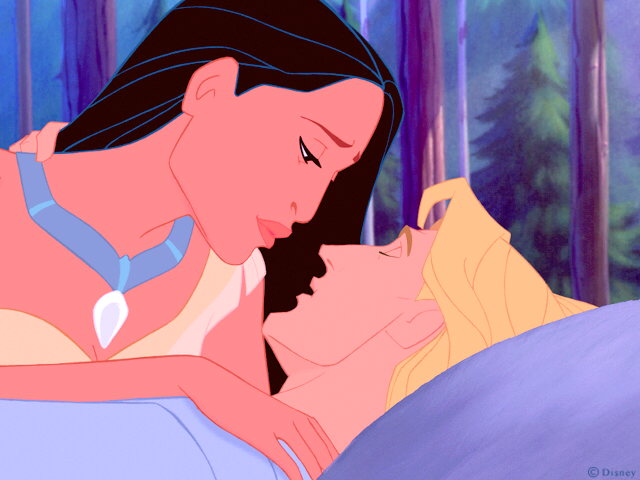 Winner of 2 academy awards for best music and best original song (“Colors of the Wind”), “Pocahontas” tells the infamous tale of when the first settlers from England land on the Virginian coast in search of gold and riches.

With them is seasoned explorer John Smith (voiced by Mel Gibson), who has his own preconceptions of the “savages” he might encounter and what is best for them. After landing, Smith sparks the curiosity of Indian princess Pocahontas (voiced by Irene Bedard), and the two soon meet in a magical moment only a Disney animated feature can provide. Realizing he’s being followed, Smith backtracks and raises his gun to a shadowy figure in the mist surrounding a waterfall. Smith is immediately mesmerized by Pocahontas’ beauty, and lowers his gun. Eyes locked, the two strangers stare at one another with a look of curiosity, fear and awe. Pocahontas turns and runs, but Smith pursues her and introduces himself. Forgivingly, for the sake of an 85 minute animated film, Pocahontas almost immediately learns english and the two begin sharing one anothers culture with the other.

This is the heart of the movie, and the message it seeks to imprint on us. The differences the two find in one another, and the prejudice that arises. Both are shocked at the preconceptions of the other, and the belief that there own way is the only way. Smith, for example, explains how much better off the natives would be with English homes and schools, and is surprised by Pocahontas’ reluctance to see that. “We’ve improved the lives of Savages all around the world,” says Smith, to which Pocahontas takes great offense, and tries to leave. Attempting to apologize, Smith says “Look, don’t do this. Savage is just a word…a term for uncivilized people.” Still angry, Pocahontas asks, “Like me?” Now backtracking, Smith stutters a response. “Well, when I say uncivilized, what I mean is…” “Not like YOU!”  interrupts Pocahontas, and the cold truth of the words sting not only Smith, but we the audience as well.

She then sings the beautiful “Colors of the Wind,” speaking not only to Smith, but the hearts and minds of us, the viewers. The two begin to fall in love, and soon find themselves torn apart, and in the middle of a hateful fued between the English settlers and the native tribes. When the romance they share is discovered, that hatred boils over and the two sides vow to destroy the other entirely. The directors (Mike Gabriel and Eric Goldberg), in Disney tradition, do a good job of portraying the historical story in a grand and magical way. But they only tell the story to a point. Absent, of course, are any references to what comes after the conclusion of the film, when the Settler’s turn on the Indians, murder them by the thousands, steal there land, and enslave them. Disney instead (and rightfully so) focuses on the tender and improbable love story, and in that they do a marvelous job, capturing the attention and imaginations of all those who see this picture. Beautiful animation and character design, and likable side characters, such as the always hungry Meeko (voiced by John Kassir), also add laughs and fun to otherwise darker portions of the film.