Directed and Written by Sylvester Stallone

I’m sure that many of you, like me, damn near laughed yourself into a hernia upon hearing that Sylvester Stallone was going to make yet another ‘Rocky’ movie.  After I had my sore ribs taped and calmed down, I thought about it a little more.  And I found that I really couldn’t blame Stallone.  Here’s a guy who sincerely worked his ass off to step out and try other roles and expand his range as an actor.  I confess that I thought “Oscar” was hilarious and he should have gotten one for “Copland”.  Unfortunately the public got burned one too many times by stinkers such as “Judge Dredd” “Assassins” and “Driven”.  Rocky Balboa is the character Sylvester Stallone is most closely identified with John Rambo a close second and really, is it at all surprising that Stallone would want to bring the story of his favorite and best loved character to a better and more fitting end than the one we got in the dismal and depressing “Rocky V”?  So I sat down with my wife and popped in the DVD of ROCKY BALBOA with an open mind but not expecting much from the movie.  And by the time it was over I was pleasantly surprised at how much I had actually enjoyed the film.  ROCKY BALBOA wasn’t made just so that Stallone could pick up a fat paycheck.  The movie is amazingly emotional and heartfelt.  To honest, boxing really doesn’t matter in this movie.  It isn’t about boxing at all.

Rocky Balboa (Sylvester Stallone) has settled down to a quiet retired life in Philadelphia.  He owns and operates a small but fairly successful restaurant named after his beloved Adrian (Talia Shire) who has died.  His pain-in-the-ass brother-in-law Paulie (Burt Young) continues to be a pain-in-the-ass but Rocky loves him still.  He’d like to be able to share more of that love with his son Robert (Milo Ventimiglia) but Junior’s too busy being pissed at his dad for having once been the world heavyweight champion.  Junior feels he’s living in his old man’s shadow and has never had a chance to be his own man and earn his own respect.  Rocky spends his time at the restaurant telling the same old stories to patrons who have heard the stories so many times that they recite them right along with Rocky.  He’s bored, he’s depressed and he misses Adrian with a heart wrenching desperation that he can barely articulate.

Things begin to happen that awaken the embers of the fire that used to burn in his heart: he’s introduced to Marie (Geraldine Hughes) a bartender who Rocky actually met years ago when he was just starting out as a boxer and she was a little girl.  She’s grown up now and has a son of her own; Stephenson (nicknamed ‘Steps’) who’s a little wary of what he sees as a punch-drunk has-been keeping time with his moms.  As it turns out, Rocky is less interested in romance than he is in simply making new relationships and trying to keep his life moving forward.  He wants to let go of the past but doesn’t know how and maybe befriending Marie and her son will help.

One night ESPN runs a remarkably realistic computer simulation that matches Rocky in his prime against the current undefeated heavyweight champ; Mason ‘The Line’ Dixon.  Dixon’s career is a massive joke as all his opponents have been picked for him, opponents that couldn’t go three rounds with Elmer Fudd.  The computer simulation has Rocky winning the match which doesn’t sit well with Dixon and his camp at all.  Rocky decides to get back into shape, get his boxing license back.  Maybe do a few small exhibition bouts in the neighborhood.  He just wants to get back in the ring and maybe by boxing he’ll connect with the man he used to be.  And that’s when Dixon comes with an offer: they should do the fight for real in Las Vegas.  Dixon’s people have convinced him that this is a way for him to change his image.  For Rocky, it’s a chance for one more last fight.  To prove to himself that he still has what it takes.  And as he says to Paulie; “Maybe if I let The Beast out one more time and let him burn himself out in the ring, I can let go.”  It’s a fight in which both men will confront what truly lies in their respective hearts.

I said earlier that ROCKY BALBOA isn’t about boxing and I stand by that.  Certainly we have the scenes of Rocky training along with Bill Conti’s classic “Gonna Fly Now” playing majestically on the soundtrack and we have The Big Fight where Rocky and Dixon wallop the piss outta each other for 10 rounds.  But before we get to that we have a wonderfully written and acted drama about a man who was once rich and famous who is now alone and dealing with what his life has become.  He’s lonely, he’s sad, he’s getting older and he’s trying to find a way to deal with all that.  Yeah, they kinda fudge things a bit to explain how a 60 year old guy can legitimately climb into the ring to slug it out with a man half his age but to give Stallone his credit, he looks in damn good shape.  There’s a bit of flab, sure.  But there’s still plenty of muscle to go along with it.  And his acting is flawless.  He knows this character and has lived with him for 30 years.  This is some of the best acting that Stallone has done in years.  Even in the scenes where Rocky gets a little preachy (and there’s two of them: one where he’s fighting to get his license back and the other is where he gives his son a verbal kick in the ass) Stallone sells ‘em because they’re obviously from the heart.  I felt what he was saying and I felt they were coming from a place that Stallone himself has drawn upon all these years when things weren’t going so well for him in Hollywood.

Burt Young doesn’t have as many hijinks as Paulie in this one.  The closest we get is when Paulie offhandedly remarks to Rocky that he’s making some back door deals for endorsements.  But he’s there in Rocky’s corner during The Big Fight when it counts.  And speaking of The Big Fight, real life boxer Antonio Tarver is a different sort of opponent for Rocky in this one.  He’s not a brutal killing machine like Clubber Lang or an unstoppable colossus like Ivan Drago.  In fact, Mason Dixon really isn’t a bad guy at all.  He really believes in the sport and is hungry to leave a legacy behind him such as the one Rocky has.  Geraldine Hughes basically stands in for Talia Shire in this one right down to scenes of her at ringside yelling, “Go, Rocky!” just like Adrian used to do.  But the relationship between them is sweet and remarkably mature.  Milo Ventimiglia doesn’t come off nearly as well as the other actors and he’s got some scenes you’ll be tempted to fast forward through.  I will say this: he and Sylvester Stallone do look as if they could actually be father and son.  Amazingly, their lips even twist in a similar fashion when they talk.

And compared to the other ‘Rocky’ movies, The Big Fight in ROCKY BALBOA is fairly realistic.  Take the fights with Clubber Lang and Ivan Drago in previous movies.

If boxers actually fought that way in real life, somebody would be carried out on a stretcher with a sheet over their face by the end.  And the sound of the punches landing isn’t as loud.  In the other ‘Rocky’ fights the punches sounded as if bones were exploding every time one landed.  Not here.  It’s a brutal fight, sure, but only slightly amped up.  Just enough to keep you in suspense as to how this thing is going to turn out.

So should you see ROCKY BALBOA?  I’d say yes.  It’s not a big summer blockbuster or high octane action extravaganza.  It’s a simple film that tells its story without any bells and whistles.  It draws you in with its careful character study and even though it’s so By the Numbers I think you’ll be entertained.  There’s absolutely nothing that’s in this movie you haven’t seen in other ‘Rocky’ movies but Sylvester Stallone manipulates the familiar elements as cleverly and as nimbly as a monkey juggles coconuts and he comes by the resolution at the end honestly.  It’s a far better way to end the series than ‘Rocky V’ and I really enjoyed this a lot more than I thought I would.  I think you will too.

Derrick Ferguson is a resident of Brooklyn, New York which is, as all right thinking people know The Center of The Universe. He has been writing since the age of twelve, influenced heavily by pulp adventure fiction, science fiction and movies. He's carefully monitored by his wife, Patricia Cabbagestalk-Ferguson who doesn't let him stay up all night writing. Derrick can be contacted @ DerrickFerguson1@aol.com Derrick is the author of two books: DILLON AND THE VOICE OF ODIN, available through Amazon.com and DERRICK FERGUSON'S MOVIE REVIEW NOTEBOOK available through Lulu.com

MY TOP ELEVEN MOVIES OF 2012, YES TOP ELEVEN, FOR FUN AND MORE WRITING OF COURSE! 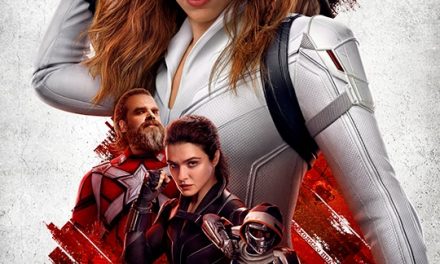