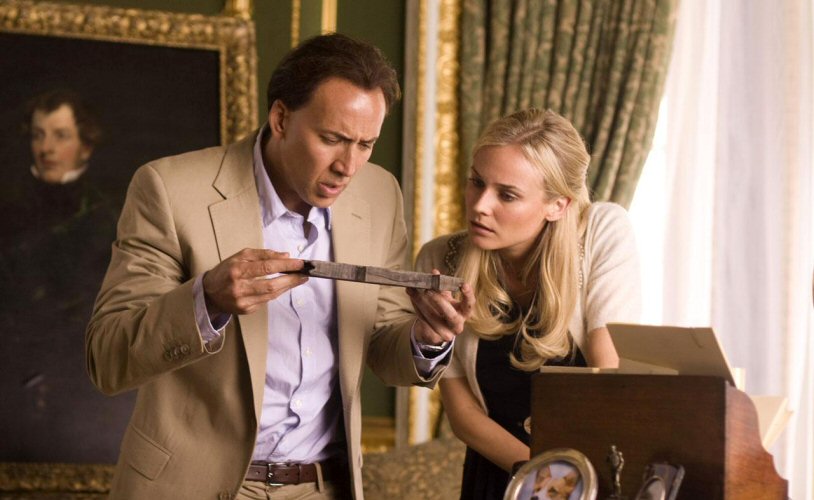 You know you’ve taken a drastic left turn when you suddenly have your hero decide to kidnap the President of the United States from a dinner party with Secret Service agents all around him. How does our hero accomplish this? He tricks the President into pursuing an ancient tunnel on an old map drawn by George Washington, that he just happened to have. Once inside the tunnel, the hero blocks the entrance and convinces the President to give him the location of the fabled Book of Secrets, and then proceeds to sneak into the Library of Congress to look at it. If this sounds ridiculous, thats because it is, and its about where this movie lost me for awhile.

“National Treasure: Book of Secrets” reunites us with our globe-trotting, Indiana Jones wanna-be hero, Ben Gates (Nicholas Cage) as he tries to clear his family name of involvement in the assasination of President Lincoln in 1865 by John Wilkes-Booth. A shadowy businessmen, Mitch Wilkinson (Ed Harris) comes forward with a missing page from the Booth diary, implicating Gates’ ancestor in the crime. In true sequel traditon, Gates is now also estrainged from Abigail Chase (Diane Kruger) since the conclusion of the previous film. Kicked out of his own home, and needing Abigail’s I.D. badge to look at the missing page, Gates recruits nerdy sidekick, Riley (Justin Bartha), to help Gates break into his own home and attempt to steal the I.D. badge. Abigail catches them, and reluctantly agrees to help them look at the page and is then caught up in the adventures to Paris, London and Washington, D.C. in search of clues to help clear Gates’ family name and find the lost “City of Gold.”

Although the film is, at times, fun to watch and humerous, “Book of Secrets” isn’t anywhere as smart or as good as the previous film in the series. The complex puzzles found in the first film have been watered down considerably in this sequel, and the answers to the riddles seem to (more or less) be spoonfed to the audience this go-around. The history is still fun, and the lengths the writers have Gates go to to retrieve clues is original, but far-fetched at best (breaking into the oval office for example). The final act of the film is exhilterating to watch, but has a slightly unearned conclusion when Harris’ villian has a sudden and uncharacteristic change of heart at the last possible moment. Still, it is a fun action movie and Director Jon Turteltaub does hold your anticipation for the third installment by nicely setting up the next adventure.