Pieces of April, a Thanksgiving movie about dysfunctional families, tells three stories. Maybe it’s more like two and a half. The third isn’t developed enough to really warrant a full number, which is a shame. The film runs for only 80 minutes, barely enough, and was shot for under $300,000. It appears that trimming had to be done, which leaves us with an underdeveloped third story and an ending which is generic and feels rushed. Regardless, it’s a film with charm and drama, and is absolutely worth watching.

April (Katie Holmes) used to be the perfect daughter. Then, she started going down the wrong path. Drugs, tattoos, and other such tomfoolery drove her away from her family, and in particular, her mother, Joy (Patricia Clarkson). Now, her mother has been diagnosed with breast cancer, and in an attempt to make up for her rebellious last few years, she invites the rest of her family to her apartment for Thanksgiving dinner. Along with her boyfriend, Bobby (Derek Luke), she begins to prepare dinner.

That’s the first story. The second is the family’s journey to get to her Manhattan residence. Joy is the most reluctant to go, although she’s pushed along by the rest, starting with her husband, Jim (Olver Platt). Their other kids, the photographer, Timmy (John Gallagher, Jr.) and the spiteful daughter, who can never get the admiration that April did, Beth (Alison Pill), along with the Alzheimer’s patient grandmother (Alice Drummond), all get in the car and, before you know it, we’re on our way to New York.

The half-story involves Bobby running around town trying to do … something. He claims it’ll help April out, but it appears incredibly shady. And who is Tyrone? Apparently he’s looking for Bobby, even though Bobby has no clue who he is. This is a clever ruse that’s actually just a trick, something you’ll find out rather early on. Bobby is a good person, and although his first interaction with April’s family involves him being bloodied and bruised, it’s not what it looks like. This time, that’s not a lie.

April’s story mostly involves her interactions with her neighbors, considering her oven refuses to start and she has to cook a turkey. These range from hilarious to disturbing to sweet, with a couple of them going through the whole spectrum. We see her determination and we realize that she genuinely wants to make things right. Meanwhile, her family is trying to figure out any reason not to go that their conscience will let them live with. Oh, and they’re also going through their own funny or touching scenes, while also allowing us to learn about their (less-established) characters.

It adds up to a very simple and effective, if easy and clichéd, ending, that uses a photo montage to tell the story. It seems to me that director Peter Hedges ran out of money, so he got the cast to take pictures instead of filming them actually acting out the scenes he probably had planned. This is much cheaper and easier, although it doesn’t allow for much of the drama and tension that easily could have existed. If only he had more money.

If that was the planned ending, and it was supposed to be told in that way, it’s too easy and simple. No risks are taken in the way Pieces of April ends, even though it seems like some will for most of the picture. The film eventually gives into formula, which tarnishes it a bit. It is still powerful, and I’ll admit that I found it moving, but it could have been more, and it could have brought all the tension that is built up throughout to a head, instead of letting it die. It has the buildup without any payoff, which is rarely a good thing.

Pieces of April also looks really cheap, using a video camera that probably could be bought at your local electronics retailer. It gives the film almost a documentary look, for some of it, and makes the characters and their situations more intimate. It’s a really simple story, after all, even though a few of the events throughout are special. A movie like this one doesn’t need — and in fact, might be hindered by — really good looking cameras. What is used here is effective.

Katie Holmes carries the film but is not the standout star. It’s Patricia Clarkson, as the cancer victim mother, who gets the most sympathy, the most laughs, and turns in the strongest performances. With that said, everyone ranges from fine to good, with Holmes still shaking off her Dawson’s Creek image — and doing so effectively, I might add. Most of these actors are likable, charismatic people, and that’s about all that’s necessary in a film like this.

Pieces of April is a surprisingly touching film considering how many other movies like it are out there. It’s about reuniting a dysfunctional family, but does it with an approach balancing comedy and drama, while also being an intimate picture with its almost documentary style. It is funny, and it is sweet, and it’s ultimately a lot of fun, even though its budget and short filming schedule seem to tarnish the ending. Instead of taking a risk, a generic, yet effective, approach is used. It works, and ends up being a Thanksgiving film worth your time. 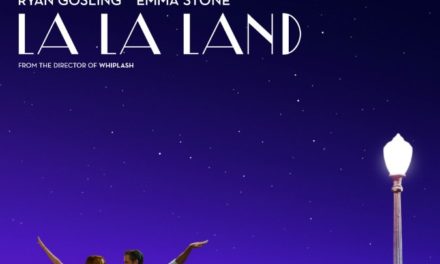