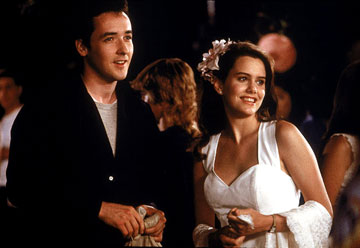 In the 1989 directorial debut of Cameron Crowe, Say Anything stars John Cusack as Lloyd Dobler, a kindhearted and passionate underachiever seeking to win the affection of straight-A student Diane Court (Ione Skye). Lloyd has no idea what he wants from life, and no career ambitions beyond a passing interest in following his father’s footsteps in the Army. All Lloyd knows is that he wants to go on a date with the smartest, most beautiful girl in school. He has had a crush on Diane Court thruout High School, and after graduation he finally calls her up and asks her to a graduation party. Diane reluctantly agrees and is soon mesmerized by the natural charm exuded by Lloyd. After a long night, Diane returns home where her over-protective single father (John Mahoney) begins to get worried this new romance will distract Diane before she goes to England in the fall on a full scholarship. Lloyds loyal circle of (mostly female) friends are also worried that Diane will only break Lloyds kind heart, but the couple presses forward and there improbable summer romance only deepens.

As the young couple tries to find time to spend together before the summer ends, Diane’s father is being investigated by the IRS for tax fraud. Out of frustration and selfishness he tries to convince Diane to break things off with Lloyd. She reluctantly does break-up with Lloyd and devastates both him and herself. Soon Diane also begins to suspect her Father hasn’t been telling her the truth about his business and that things may infact be worse than just tax fraud. Diane falls out of her sheltered existense, and into a spiral of confusion and despair. She soon comes to doubt almost everything she knows as her world comes crashing down around her. She must make the hard choice of sticking by her father or making amends with Lloyd.

John Cusack’s Lloyd Dobler is perhaps the greatest example of what a Cameron Crowe leading man is. He is the most vulnerable and takes some of the greatest risks of any of Crowe’s leads. When Diane’s father asks Lloyd what he wants to do with his life, Lloyd replies “What I really want to do with my life…what I want to do for a living, is I want to be with your Daughter. I’m good at it.”  That, in a nutshell, is Lloyd Dobler. He is one of the most likable and most honest breaths of fresh air you will find in a movie. Girls want to date him and Guys want to be him. The movie is so expertly written by Crowe, and the chemistry of the two young leads is undeniably great. When the seemingly inevitable break-up scene occurs in Lloyd’s car, and Diane gives him a pen, your heart sinks into your stomach and all you can do is cling to the hope that Lloyd has to win her back. When he stands in her driveway and holds the boombox over his head playing “In your eyes” for Diane to hear, you can’t help but get chocked up. Crowe writes beautiful, identifiable characters and few are better at crafting such lovely and elegant love stories as this.

Say Anything is one of the greatest tales of young love ever made.

I Love You Beth Cooper