IRON MAN needed to shake off some of the rust. 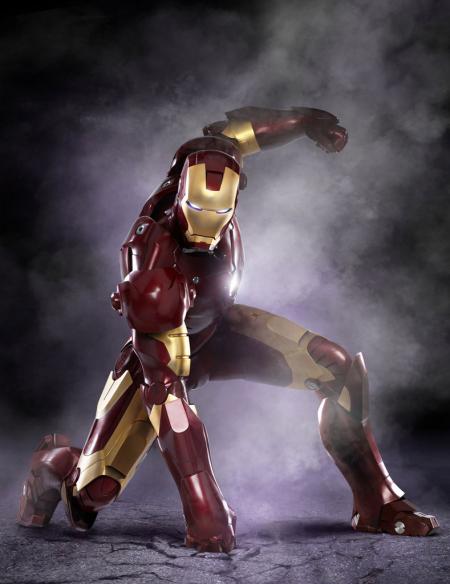 So, I would love to sit here and type a rousing, overwhelmingly positive review to this movie. Both because it is the first of the summer ’08 “blockbusters”, and because I had actually let my guard down on this one, and allowed myself to look forward to it. Suffice to say, I can’t do that, and for the second straight year, the summer gets off to a wobbly start, and also for the second straight year with a Marvel Comics adaptation. Thankfully I can say that this was not the train wreck that either “Ghost Rider” or “Spider-man 3” were. I’ll take some silver lining however I can get it on this one.

Okay, is “Iron Man” a completely awful movie? No. Did I enjoy watching the film at all? Yes. Unfortunetly, I was also quite often bored with the movie, and must’ve looked at my watch a half dozen times, which is never a good sign. I also realized something on the drive home, as I tried to think about the film and what I thought about it. It’s something I should’ve realized before spending time and money on, and that’s that I don’t like Iron Man’s origin story. I’m sorry I don’t, and despite a nicely tweaked and updated version in the film, I was still mostly bored for the first 45 minutes or so and desperately wanted him to get in the damn suit and shoot at something.

The film opens with womanizing, alchoholic and billionare Tony Stark being escorted from a weapons testing site in the hills of Afghanistan. Moments later the convoy is ambushed and Stark is critically wounded by shrapnel and taken captive. He wakes up and learns the terroists are using his company’s weapons and are asking him to construct a super-weapon for them. He agrees, but secretly uses the time to assemble a monstrous suit of armor, and uses it to escape the terroists. Naturally, he leaves the suit behind and the terroists use it to make another, bigger suit and that comes back to bite Mr. Stark in the film’s final act. Meanwhile, Stark returns to the U.S. and has a new outlook on his company’s future and announces that his company will no longer produce weapons. This comes as a shock to everyone, most notably his business partner Obydiah Stane, who as it turns out has an alliance with the terroists and actually ordered the attack on Stark. Stane goes about blocking Stark from the media and company’s assests while Stark locks himself in the garage building his suit.

To clarify, it is a faithful origin story. Like I said though, I never liked it much, and I just went in somehow hoping for more. I didn’t think this movie would be just the origin story, and perhaps that’s my fault. I take the blame on that one.  I really just wanted to see more of him in the suit, and what little we got was mostly him making the suit(s) and testing them. It just felt like they had 45 minutes worth of actual, fundamental story to tell and decided to stretch that into 2 hours. Honestly they could’ve condensed what they did do into 45-50 minutes and done a much more impressive second half of the film. As it is, they seem to have wasted most of there budget on the precious few action scenes in the film, and as a result we are left to suffer some truely awful matte paintings in some parts of the film. No, not as bad as in “Daredevil”, but still pretty bad.

Again though, it wasn’t a completely awful movie. When Iron Man was on screen it was usually very cool, and the end fight was very fun to watch. The casting was very well done on this film as well. Robert Downey, Jr. was magnificently casted as Tony Stark, and I am grateful Marvel allowed him to be portrayed as the arrogant, womanizing alcholic that he is in the comics. Gwenyth Paltrow was simply adorable in this film as Stark’s assistant and love interest, Pepper Potts. Every second she is on screen in wonderful. She plays the part very well, and looked amazing with the red hair. Jeff Bridges is cast as Obydiah Stane, who the second you see, you know is the eventual villian. He does an okay job, but I didn’t like what they did with him. Lastly is Terrence Howard as Jim Rhodes. He did okay, but his voice really bothered me the whole film. Just can’t buy that he’ll be “War Machine” later in the films. It was nice that they set that up though.

In the end I think I just wanted more from this movie. I’ve been spoiled by some pretty amazingly well done comic book movies in the past 8 years, and also some really really bad ones. The good ones all found a way to balance the characters and action, which is what you’re really there for in the end when you see a comic book movie. Basically, I just wanted more of Iron Man fighting things. Was it a humerous movie at times? Yes. But if it was me, I would’ve lost a few jokes and about 45 minutes of this movie and added some old fashioned popcorn movie action. Thankfully, the trend is that Marvel’s first movies often aren’t the best, then the sequel’s usually rock. I only hope that is the case here, because the effects were great and the cast nearly flawless, its just a matter of making it worthwhile to see them.