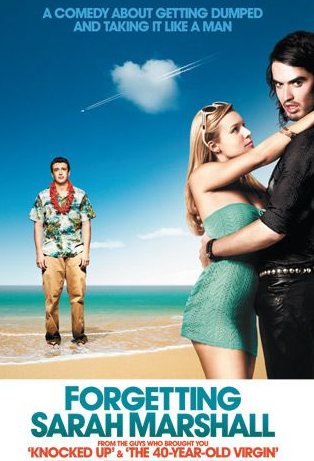 The Apatow comedy train left the station with the absolutely hilarious The 40 Year Old Virgin, stopping at the good but nothing overly great Knocked Up, the disappointing Superbad and the throwaway Drillbit Taylor. The next stop is Forgetting Sarah Marshall, an improvement on the last three efforts but not quite reaching the same level as the initial one.

After being dumped by his TV star girlfriend, a devastated Peter decides to take a break in Hawaii to get over her. Little does he know that his ex is staying in the exact same hotel along with her new boyfriend.

It’s probably down to the fact that we’ve seen so many Apatow comedies now that it’s just not as funny as it used to be. The aforementioned The 40 Year Old Virgin was, and still is, one of the funniest films of the 21st century so far. It just exploded onto the big screen out of nowhere, taking everyone by surprise and it was a big hit. It seems like I’m the only one who wasn’t blown away by his next two efforts after that, Knocked Up and Superbad. Especially with the latter I still can’t think today why the hell that was received as well as it was, both by critics and fans. Forgetting Sarah Marshall, as I said, is at least an improvement in my comedy books. It’s got some great comedic dialogue, most of which come from an extended cameo appearance of which I will get to later, but it also is really smart at the same time. That’s something Apatow has managed to keep all the way through his films, even when he’s only producing them, is that combination of funny and smart.

The general premise of the film seems like it should be boring and clichéd. We’ve seen it quite a few times in a lot of different movies but the team behind this makes it funny, clever and all round enjoyable enough to make it feel fresh and new. The script, written by star Jason Segel, is not as hilarious as I’d hoped but when it’s on believe me it’s on. Segel times some of the dialogue so well that I literally burst out laughing inadvertently, even when it was something as ridiculous as, for example, Segel flashing full frontal male nudity. I was actually surprised those instances were allowed to be kept in, but we’re all glad they were as it makes for some of the most shockingly funny few seconds I’ve seen in the last year or so.

The film has a great mix of different actors, most, if not all,of which will be recognisable from other Apatow movies, playing lots of different characters that really provide great filler to support the main story when it happens to sag. Everyone from Jonah Hill’s restaurant waiter, Mila Kunis’ receptionist (she is someone we rarely see in movies, strangely, but she’s great here), Peter’s stepbrother played by Bill Hader and Paul Rudd’s stoner surf teacher. But the best character, not only supporting but overall and the funniest thing in the entire movie is Russell Brand’s Aldous Snow. Brand has set his sights on the world of film but he hasn’t quite found a movie that called for his…style, shall we say. Here the role is pitch-perfect for him, he gets to play a character which is basically what he’s like in real life. It’s then not really acting but who gives a damn when he’s this damn funny? I can’t tell if it was the script or him, probably a combination of both, but I just found myself laughing every time he was on-screen.

As with all of the Apatow pro-The 40 year Old Virgin movies I found there to be quite a few weaknesses. First off, and again like all of Apatow’s stuff, the film is far too long. He seems to stretch every film he has to round about the two hour mark when 90 to 100 minutes is all that’s called for. There were a few scenes that didn’t work and parts of the story that just weren’t necessary, extending the runtime needlessly to the point where I was looking at my watch for it to finish. Also I think in general it’s just the whole Apatow thing that’s beginning to wear thin, on me at least. Every one of the movies that he’s involved with has the same feel, and sometimes even the same look, and it just isn’t having the same intended effect that it first did.

This will probably be another big hit for the Apatow gang and kudos to them for still being able to draw the amount of people that the movies do. This is an improvement over some of his previous efforts, with some hilarious moments and great characters worthy of the time and money. It’s clear, however, that the Apatow train might not be speeding along for very much longer.