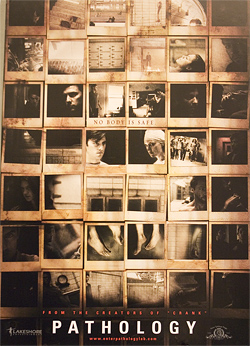 Coming off of their strong (at least) fan success with the insanely frantic Crank, filmmakers Mark Nevaldine and Brian Taylor have come up with an original and intriguing idea that executed with style and true conviction.

The idea or game is simple; a group of medical students pick a victim out of the millions in the city and kill them but in a way that the others won’t be able to figure out. Ted Grey, a new member of the pathology lab where the others work, gets quickly pulled into the game and in an inevitable fashion things start getting out of hand.

I had a lot of hope for this movie as I was a big fan of the makers mentioned movie Crank. I was thinking beforehand about where the hell these guys can go to after such a fu;;-on exercise as their previous movie. But after only 10 minutes of watching Pathology I realized that this wasn’t going to be what Crank was, aside from the fact that it’s not directed but only written and produced by the duo, and instead was going to be a insight into the nature of killing another human being and what it means not physically, as when you think about it the actual physical act of killing someone isn’t all that hard to do, but what it takes psychologically for a person to commit such a terrible act.

That’s pretty much what sold the movie to me right from the get-go. We have seen a million different films tackle the concept of murder but rarely have we seen it done in a way that makes us think about the actual; atrocity of doing such a thing as usually films are more preoccupied with getting the body count as high as possible and little else.

I wouldn’t exactly say that this film will please the squeamish viewers out there as there are quite a few scenes of dead bodies being cut open and the like but it’s not so full-on and graphic that it will make the casual viewer throw up. This isn’t Saw or Hostel, sure it has gore but it’s done so because the story demands it and not just for the sake of it. I am not a big fan of gory films so I admit I was quite apprehensive when I realized that some of the imagery I was going to endure wasn’t going to the most pleasant to say the least. But I didn’t once feel squeamish even when we get a full-screen shot of someone’s open chest cavity. I think there was a high amount of skill involved from everyone to make this so; showing gore but not being disgusting, I really didn’t think that was possible.

Pathology also sees the next career move for Heroes star Milo Ventimiglia. It’s amazing to think that an actor can be so known and so popular but there resume isn’t that plentiful. He has done work here and there, including a small but memorable role in Rocky Balboa as his son, but I think this film is possibly the starting pistol in his movie career. His role in this film fits him like a glove (pun certainly intended), he brings a certain charm and vulnerability to it and it’s no disadvantage to him that the camera absolutely loves him. I can him going very far from here on out and I personally can’t wait to see him pop up in more movie to come.

One of big highlights of the movie for me was the character of Jake Gallo, the psycho-like ‘rival’ pathologists who basically recruits Ventimiglia’s Ted Grey. You can tell right from the first time we see him that there’ something definitely not right in the brain department and it’s not very long before we find out what he’s capable of. He gives a nice contrast to Ventimiglia obviously more level headed character and  a lot of the movie’s finest moments come when the two of them are playing off of one another.

The movie overall has a nice mix of things; it’s fairly short in length, the writing is on the-ball almost all of the way through, the acting is great, the direction feels fresh and energetic and there’s some nice little twists to the story along the way. There are a few weak characters here and there and some unnecessary scenes but for the most part the basic idea is played out with great conviction and the end result is a taut, highly enjoyable thriller.