A Deeper Look at “The Lincoln Lawyer”

Matthew McConaughey is “The Lincoln Lawyer,” called that because he runs his law business out of a Lincoln Continental Towncar. The license plate reads: ntguilty because Mick works hard to convince juries that his clients are: Not Guilty. The movie is a great portrayal of a smart Los Angeles “street” lawyer who defends, among others, a biker dude, a “coke” prostitute, and currently, a young real estate millionaire who has been charged with attempted rape and murder. And, that’s just his ordinary day.

Mick Haller, “The Lincoln Lawyer,” is the creation of Michael Connelly, the crime fiction writer. I love this genre of fiction and have read nearly all of Connelly’s books so I was excited to see a movie tell one of his stories.

But, on second thought, Connelly’s books are usually pretty involved and I wondered how the screen writer would boil a complex novel down to two hours. And yes, like Connelly’s books, this movie is jam-packed with several different themes and lots of action. It’s a 3-star movie at least but if you see it, you’ll need to focus. I sure did.

Louis Roulet (Ryan Phillippe) has been charged with assault and attempted rape. But, he claims he’s been set up. Yes, he admits that he arranged a time for sec with the prostitute, Regina Campo, but claims that as he stepped into her apartment she hit him with a club. Then she called the two gay guys across the hall, who called the police and Louis was arrested for assault. Mick takes the case believing that Louis is innocent. This is the main theme of the movie.

Mick has a clever, kind of off-beat private investigator, Frank (William H. Macy), who is also a close friend. Frank unravels the truth about Roulet. But, he’s killed after discovering information that would prove that Roulet is not only a consummate liar but also a seasoned killer.
Even though Frank is dead and Mick is grieving, he reasons that Louis is not who he says he is.

The other important theme here is that some time back Mick defended Jesus, a Hispanic man played by Michael Pena, whom Mick was convinced was guilty of rape and murder. In spite of Jesus’ denials, Mick thought he was saving Jesus’ life when Mick plea-bargained him down from a death sentence to life in prison.

Now Mick understands that Roulet killed the woman. Jesus is in jail for a crime he didn’t commit and Mick feels responsible.

Because the prosecutor’s case against Roulet is weak and because Mick did the job Roulet hired him for, Roulet walks away a free man. This is not quite the end of the story, though; another suspenseful 15-20 minutes round it out. But, I sure don’t want to give the ending away. If you like mystery, action and a surprise ending, it’s worth seeing.

Three of the heaviest qualities that Superiority people have are:

(1) they’re always experts at something; Haller’s an expert in his area of law. And, he expertly works his people network to get the result he wants.

(2) Superiority people usually have a variety of goals going at the same time; they work thoroughly and precisely at achieving them. They’re strongly motivated to get them done. Mick actually says this out loud when another lawyer confronts him in the elevator about the “scum” Mick defends. He says that it’s Justice in each case that matters so much to him. He doesn’t embrace the idea that the legal system should put someone away because the prosecutors know that person to be a criminal. Mick believes that real Justice demands that the person be proven guilty beyond a reasonable doubt. Mick’s goal is to give his clients the best defense he can.

(3) Most Superiority people have high standards for themselves and for others; these people set the bar high. Here, we see Mick values truth; he
immediately confronts the people who lie to him. He values doing the right thing. We understand this when we see him agonize over Jesus’
wrongful conviction. He’s tormented by his own thought: “Gotta make it right; gotta make it right.” Mick values acceptance, hates judgment.
We see this when the investigator on Frank’s murder makes a derogatory remark about gay men. Mick’s reaction is very clear; he’d like to beat the guy up.

Two of the highest qualities that active Controllers have are:

(1) They’re analytical. You can literally “see” Mick thinking through what he knows and how all of it fits together. He’s “figuring out” what’s
happening to him and those around him and deciding how to control the people and situations that might impact him or his family.

(2) Controllers are intense. You can literally see and feel Mick’s intensity, both in his actions and his emotions as he moves rapidly from one situation to another.

** Note: Passive Controllers are a whole other breed. But, that’s for another time.

Observe, too, that neither of the other two personality types, Comfort or Pleasing, are part of Mick’s behavior. He does drink a lot, trying to
dull his guilt and remorse over the Jesus case. But, that’s not the kind of drinking Comfort people do. Comfort people drink consistently. Mick binge-drinks here because his conscience just won’t let it go. Remember: “Gotta make it right; gotta make it right.”

Well, that’s a brief study of The Lincoln Lawyer’s two strongest personality types. If you’re interested in knowing about personalities, start by asking yourself if you are either a Superiority or Control personality. Or, both. Or do you identify more with Marisa Tomei as she portrays a Pleasing Maggie. I hope that while you’re thinking about your own personality types, you’ll think about those of the people around you. The more we understand about ourselves and others, the more inner power we have. Inner strength along with good skills equals a successful, happy life.

Thanks so much for reading. And, if you like the plot and action in this film, you might like some of these other authors, too: John Sandford, Robert Parker and Lee Child. Enjoy!

Warmest regards until next time,
Joan 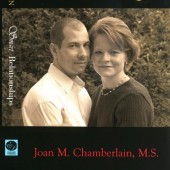 Joan Chamberlain is an author, therapist, and life coach with over 30 years of experience helping adults, couples, and teens. She has a Bachelor’s degree in Business and Finance, a Bachelor’s in education, and a Masters in individuals, couples, and family counseling. Her book, Smart Relationships, has helped many people achieve the self-awareness needed to see themselves honestly. Its wisdom has helped them work toward improving their relationships with themselves, their friends, and their families. “Joan Chamberlain is a godsend,” says one client. “My wife and I would still be stuck in one spot, racing at top speed but going nowhere, if it weren’t for her. It is because of her that our future is no longer some uncertain, scary eventuality that we hurtle toward, terrified. She has a way of cutting right through the nonsense to the very heart of our issues, guiding us firmly – but with great care – toward a happier and more fulfilled us.” A kind and inspiring therapist, coach, and teacher, Joan is dedicated to helping others expand their understanding of who they are, where they’re going, and how they are going to get there. She believes that knowing oneself is critical for success. Understanding how our personalities are both unique and the same is the key to what makes vibrant relationships of all kinds work, and to how we can turn out balanced, emotionally-wholesome children. “Passion is knowing what you want and never stopping until you get it,” says Joan. “My passion is working with individuals to help them explore their inner life, to maximize their talents and to lead fuller, more alive, more contented lives.” Joan Chamberlain lives in Chesterfield, MO, with her granddaughter Tiffany, and continues to counsel individuals and couples, all the while publishing a website, books, and paper for those wishing to maximize their happiness.

Rise of the Planet of the Apes