This is one of those movies that is just made to be watched on a dark and stormy night. It’s set in the 1300’s in France against the backdrop of the black plague ravaging Europe, and this movie hits the mark when it comes to portraying how desperate, sad, and gritty those years must have been. The movie has a little bit of everything- errant knights out to slay a demon, a monk who falls in love with a girl, superstitious villagers bent on burning innocents at the stake, a creepy village under the power of an apparent necromancer/sorceress, plenty of torture, and a very overt battle of good vs. evil, as well as a subtle question of faith- mixed with some thought provoking themes questioning the existence and nature of God, but not in a preachy way.

Our story opens in a monestary, where a young Monk named Osmund (Eddie Redmayne) is torn between love of a girl- who wants him to run away from the monestary and meet her near a landmark cross- and his holy vows as a monk. He prays to God for an answer, and the next day a rag-tag band of knights come to visit. They’re on a mission to find a specific town, and need a guide who knows the way. Osmund takes the job- intending to see his sweetheart along the way.

It isn’t until he is on the road that he learns that this band of knights is out to do battle with a demon, who apparently has kept an entire town from being effected by the plague. Rumors of necromancy and witchcraft are abound. The knights have been tasked with slaying the necromancer and returning to the Bishop who sent them. Osmund doesn’t believe in such superstitious nonsense like witches and necromancy, however he keeps his word and agrees to take them to the town far off in the swamps.

Along the way we see a very bleak picture of the world- and witches and monsters are not needed to make it creepy and surreal, human beings are doing a fine job of that before we get five miles down the road. Superstitious villagers are burning women at the stake. Plague victims are being killed by their best friends (as an act of mercy for both parties). People are dying at such a rate that it’s nearly impossible to bury them all. The world is suprisingly bleak and vacant. Osmund’s love interest is apparently slain by robbers in the woods before he ever reaches her.

Osmund’s idea that witches and necromancers are ficticious is challenged, however, when the knights arrive at the town they seek. Something is obviously eskew here. There are no plague victims here. No bodies piled up in the town. No pyres or women being burned at the stake. Only…houses. Quaint little houses, and smiling villagers. Not smiling happy though, smiling sort of creepy and sinister. No hordes of robbers. In fact, there are any number of pretty girls- and the girls outnumber the boys in this town.

Add in a beautiful temptress as a de-facto mayor, a few clues to implicate the townspeople in the dissapearance of some earlier knights sent on the same mission, a creepy, mysteriously vacant church (filled with cobwebs and obviously out of use), and the towns people’s aversion to prayer, a few drugged drinks, a woman returned from the dead, and you’ve got a pot of suspense ready to boil over.

I won’t give away the ending (which is full of some very good twists and turns) but the last half hour of this movie may leave you asking yourself a few questions about how far you’d be willing to go to keep the faith, and which bunch of people in this drama actually had the moral upper hand.

I loved that this movie managed to balance action, suspense, and the underlying themes of right, wrong, faith, and disbelief, in such a way that they go almost unnoticed as the plot of the movie simply sucks you in. Before you know it you’re merely along for the ride and itching to see how it ends.

If you like creepy movies that rely on plot instead of CGI to deliver the goods, then this movie is for you! 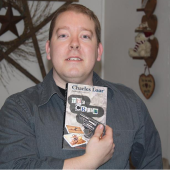