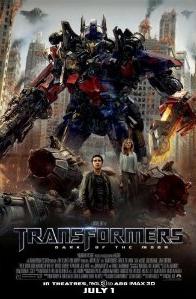 In 2007, executive producer Steven Spielberg and director Michael Bay delivered to audiences walking, talking, robots in disguise with “Transformers”. The summer blockbuster took the box office by storm and raised the bar for visual effects extravaganzas at the movies.

Two years later, Spielberg and Bay did it again with the outstanding follow-up (although many would contest my usage of the word “outstanding” in regards to that film) “Transformers: Revenge of the Fallen”. Once more this franchise blew away box office expectations and elevated the aforementioned bar even higher.

Now, here we are in 2011, and like clockwork a third Transformers film has arrived in theaters under the guidance of the previously mentioned executive producer and director. So, does “Transformers: Dark of the Moon” have what it takes to surpass its predecessors or do these robots in disguise need to go back to Cybertron?

“Transformers: Dark of the Moon” begins a few years after the last film as Sam (Shia LaBeouf) has graduated college, has a new girlfriend (Rosie Huntington-Whitely), and is looking for a job. Meanwhile, the Autobots are still working alongside the U.S. government to protect the planet from future Decepticon attacks. However, the tide of war is about to change as the Decepticons are working to reassemble a recently discovered Cybertronian technology that could resurrect the long-dead planet of Cybertron and destroy the Earth in the process.

Regarding the question I asked a moment ago, whether or not this film has what it takes, the answer is an absolute “YES”, without a doubt! If you were one of the moviegoers that felt disappointed by the last installment, this newest entry will easily erase any lingering ill will you may still be harboring towards this franchise.

Written by Ehren Kruger (the only returning screenwriter from the previous film), this film boasts the biggest story, the craziest action and visual effects to feast your eyes upon, and stakes that feel higher than ever before. Plus, the story actually strikes a few surprising emotional chords that I didn’t expect; resulting in a movie that feels much more mature and grown up than the other installments.

The previous film, although I found to be enjoyable, many felt was inferior to the original by having a story that was overly convoluted and over-the-top. Personally, I disagree, but that was the major consensus, so I’m in the minority.

This newest movie boasts a much more streamlined plot that is more centralized and focused on a few major set pieces as opposed to the globe-trotting escapades of its predecessor. By taking this approach some might wonder if the final product seems scaled back by comparison.

The answer: yes and no.

In my opinion, the film feels easily as epic in scope as the previous one, in terms of the action on display and the threat being leveled by the Decepticons. But the main story does feel somewhat smaller, more inline with the original film. It sort of brings everything full circle, back to the basic concept of a young man thrust into an extraordinary situation.

Truth be told, I think this was the best approach for the movie. Reason being, since this is Bay’s supposed last go-round with the franchise; the film serves as a very nice bookend to the story that began four years ago with the original.

Another area that became a bit smaller is the cast of Transformers in the film. Unlike the last entry, where the number of robot characters increased dramatically; this time around, the core group of Transformers is relatively the same size as the original movie, just with some new faces.

This more concise core cast of Transformers is a wise choice as it provides audiences a chance to get to know who these various robots are and see more of their distinct personalities on display. Thus, allowing us viewers to develop an emotional investment in them, so that they actually become real characters to us and not just CGI creations.

While the robot cast may have downsized a bit, the human cast of characters the story focuses upon is much larger than ever before.

Leading the cast once again is Shia LaBeouf as Sam Witwicky. By now, Shia is undoubtedly as comfortable playing Sam as he is in his own skin. Such familiarity with a character could lead to boredom seeping into an actor’s performance, but not with Shia.

It’s clear that Shia has grown over the course of these films right along with his character, and this time around everything about his performance feels so much more relaxed, natural, and mature. That’s not to say that Shia’s wit has died down as a result, far from it in fact. His comedic timing seems better than ever, and his one-liners and sarcastic observations are much keener than previously seen.

Next to Shia, through much of the film, is a new leading lady, played by model turned actress Rosie Huntington-Whiteley. Some may miss former lead actress Megan Fox, whose departure from the film was highly publicized, but Rosie does a good job of stepping in as Shia’s new girlfriend Carly. And as surprising as this may seem, Rosie actually is a decent actress, delivering a much more consistent performance than Megan did in either of her two outings.

Each of these actors get their time to shine in this film, just as they did in the previous two, but their characters feel more naturally integrated into the story than ever before. For instance, this time around the military’s involvement seemed more logical due to the presence of Transformers on Earth no longer being kept secret.

As for Simmons, his involvement wasn’t pure coincidence as it was last time. With the Transformers operating openly in the public, inserting Simmons into the action felt like an obvious choice given his character’s obsession with the robots.

Speaking of John Turturro’s character, I thought the eccentric nature of Simmons really fit with his demoted status quo in the last film. However, now that he’s a filthy rich author due to his conspiracy theories and first-hand knowledge of the Transformers, his quirks are even better suited to the character.

Now some complain that John Turturro’s performance as Simmons has always threatened to derail these movies. Personally, I’ve always gotten a big kick out of his portrayal and feel that just like everything else in this film, he’s never been better.

Also, showing up in two brief cameo appearances are character actors, Julie White and Kevin Dunn, as Sam’s parents. I have enjoyed their characters every time they have appeared in the previous movies, and I was glad to see they were included yet again.

Once more we are given several hilarious one-liners, especially from Julie as Sam’s boundary-ignoring, borderline inappropriate mother. Sadly though, we were only given their two short appearances in the film. I for one would have enjoyed seeing more of them again, but honestly they wouldn’t have really fit into the story, so it was probably for the best.

Newcomers to the cast, aside from Rosie Huntington-Whiteley, are several high-profile, A-list actors and actresses ranging from John Malkovich (“Con Air”) and Frances McDormand (“Fargo”) to Alan Tudyk (“A Knight’s Tale”) and the increasingly popular Ken Jeong (“The Hangover”). While some of these characters had moments of seriousness, Frances McDormand’s character being the most serious-minded; for the most part, they all delivered great bits of levity amidst the robo-led apocalypse descending upon mankind.

Alongside the actors appearing on the screen were the talented voice-over actors breathing life into the CGI-created Transformers. Each voice-over cast member delivered excellent work and made their characters really feel alive to the audience. As always the sound of Peter Cullen as Optimus Prime continues to make those of us who grew up watching the 1980’s animated series feel like kids again.

Joining the voice-over cast is the legendary Leonard Nimoy (“Star Trek”) as the long-lost Autobot, Sentinel Prime. Leonard’s gravelly voice brought a sense of gravitas and authority that was vital to the portrayal of Optimus’ predecessor. Plus, the nod or two to Leonard’s history as Spock from “Star Trek” was a fun little easter egg for fans to look and listen for.

Of course, with these films all of the cast and crew’s hard work would be for naught if it wasn’t for the outstanding visual effects work. As with the previous two movies, the bar for CGI in film has been raised once more. The realism on display when bringing the two warring factions of Transformers to life continues to be astounding. Not to mention, the final hour alone, when the war really comes to a crescendo, makes the whole movie worth watching.

So after all that, I leave you with this final thought. If you are one of the numerous fans who lost interest in this franchise after the perceived horror that was “Transformers: Revenge of the Fallen”, then this latest installment will erase that pain and make you remember what it’s like to be a kid again.

And in the end, just like its predecessors, “Transformers: Dark of the Moon” is the epitome of what a summer blockbuster is supposed to be and proud of it.

“Transformers: Dark of the Moon” is rated PG-13 for violence and language.