This is the fourth Wes Anderson film I have seen, and it just might be my favorite. The Darjeeling Limited focuses on three brothers Francis (Owen Wilson), Peter (Adrien Brody) and Jack (Jason Schwartzman) as they take a train ride across India with the plan to find spiritual fulfillment, at the same time they are all still dealing with the loss of their father from one year earlier.

There is no real major plot to the film, we just get to experience this journey the three brothers take and find out what happens along the way. Its hard to discuss this movie without giving away too much of the story, and I don’t want to do that because it ruins some of the spontaneity the movie has. I will say that the writing and acting are both great. This movie is funny, sad, serious and goofy all wrapped up together.

The boys haven’t seen each other in a year, since their father’s funeral. And you can tell that their relationship is anything but good, as Jack says, “we don’t trust each other.” Each one of them is carrying some baggage, literally and figuratively. And this film is about these brothers becoming brothers again, and dealing with their father’s loss, but not in the typical way that you would expect. After all, this is a Wes Anderson picture, and nothing goes according to plan. The brothers eventually find themselves kicked off the train and in the middle of India. There is an event in this film that I believe is very powerful, as it forces the brothers to reflect back on their father’s death. You can tell that each one of them loved their father very much. It doesn’t show this in the typical sense, but if you dig a little deeper you begin to realize what they were willing to do and how important he really was.

The film deals with issues of loss, love, death, trust, and emotional healing, and when you read these words, you probably think your going to get some highly dramatic and overly emotional film, but you don’t, and that’s what’s so great about it. Wes Anderson deals with these topics is such a creative and unconventional way that you can’t help but respect and admire his creativity. In the beginning Francis talks about how their trip is going to be a journey of discovering spirituality and finding themselves. They are going to bond and become brothers again. While I wouldn’t say they discover spirituality, I believe what they discover and learn is more important that that. They learn to deal with the death, and nothing states this more clearly than the final shot of the film as they all drop their, and their father’s baggage so they can get on the train. 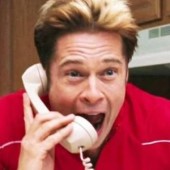