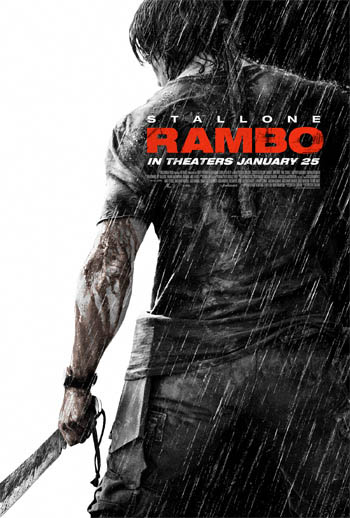 Having taken another swing at things (pun intended) with Rocky Balboa, Sylvester Stallone has decided to take another and presumably last go at reviving another iconic character from yester-year; this time around bringing Mr John. J. Rambo. Where Rocky Balboa managed to both respect the character and have enough there to draw in fresh audiences, the latest instalment in the Rambo series has some fantastic action but doesn’t quite have what Balboa had to make it special.

In Thailand, John Rambo joins a group of mercenaries sent into war-ridden Burma to rescue a group of Christian aid-workers who have been kidnapped by the ruthless local infantry unit.

What is expected when going into see a film like Rambo? It’s certainly not Shakespearian dialogue, fantastic, Oscar worthy performances or even a great storyline. What you do expect, however, is some fantastic action sequences, a great pace possibly and just an overall fun time at the movies. And although it does deliver the latter eventually, it takes a long and almost painfully bad time to get there.

The dialogue is perhaps the films prime downfall. Like I said I am not expecting it to be poetically meaningful, Oscar worthy stuff but I do expect it to at least be passable and plausible. The dialogue here, co-written by director and star Stallone, is really bad for the most part, eye-rolling a fair amount of the time and a few times just utterly atrocious. I can’t quite get my head around the fact that Mr Stallone, and co-writer Monterastelli, sat down and actually thought that some of this dialogue would be worthy of using in a movie. This is also the main culprit in the low quality (to say the least) of the first hour so. Around the hour mark I don’t think I had much hope in me that the film would get any better. It’s been really bad so far, it can’t get any better, right? Wrong.

Luckily the last half hour of the film kicks some major ass. It has some of the most mind-blowing explosions and creative ways of killing the bad guys that I have seen in recent years. In true Rambo style the body count is easily 100+ throughout the movie, and it’s not like the audience thinks that’s a terrible thing, in the eyes of an action fan; the more kills the better. And that’s pretty much the mentality the film has for the last section, any and every bad guy gets their guts spilled, bodies ridden with bullets or their heads blown off (and in most cases all three). The movie certainly plays its card right in terms of action. There are movies where the killing is supposed to be deep and meaningful, where everything has to have a point but there are some movies, such as Rambo, in which the movie fan in all of us just wants to see the bad guys get their due and the latest instalment in this series delivers that.

Now in the first, horrible section of the film there isn’t a complete lack of action (if you can call the following “action”), as there are scenes of the bad guys storming a village, murdering, raping and causing havoc amongst the villagers. I could accept that, as lets face it many-an-action-film have used this tactic to gain justification from the audience, but it’s the graphic nature that Rambo has that I hold against it.  We see women raped, people blown apart and even children being thrown into fires. I am not exaggerating when I say that; we do see these things in pretty much full detail and I just thought it was way too much. I realize their intention of doing this, as like I said it is following in the footsteps of other action movies in trying to justify the bad guys getting their due, but I just don’t think they should have shown it in such a graphic way is all.

There’s not much else to say about Rambo; the first hour is horrible in pretty much everyway, terrible dialogue, paper thin storyline, two dimensional clichéd characters, and some wholly unnecessary graphic scenes of violence towards innocent people. But the film is balanced by some mind-blowing action sequences and machismo in the last half hour. Luckily it’s just enough to make Rambo worthwhile, even if it isn’t anything to write home about.