Get Low was released in 2009 – and only now has is dragged itself towards Australian theatres another two years later. Starring Robert Duvall and Bill Murray, this ragtag drama film sees a hermit throwing himself a self-titled ‘funeral party’, desperate to hear stories of himself and perhaps confess one of his own stories.

If only the film was a little more compelling than the stories as a whole; maybe then it wouldn’t feel as if it were a cheap high school drama project. Director Aaron Schneider fails to evoke a sense of historical context, evident in the fact that the entire setting of the film feels like it’s occurring on a set rather than in 1930s Tennessee. Duvall’s character seems completely disengaged from the action and otherwise fails to capture the image of the real-life Hermit as intended.

On that note, Duvall managed to pick up an award for Best Actor in 2010 for this so-called ‘performance’. Wow. So because he can mutter under his breath in a low-key tone and soak up the limelight with a character that otherwise has no depth or dimension whatsoever, he’s entitled to an award from Hollywood? Big deal. We’ve seen better and strikingly similar performances in The Godfather, The Apostle and The Road, so what makes this anymore special? Bill Murray doesn’t offer much either, with his character jumping lazily in and out of the action in his interaction with Duvall. 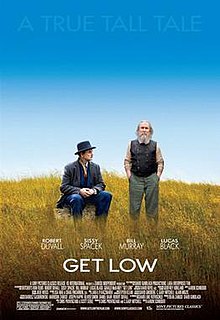 Whilst it does coin some interesting concepts of morality and existentialism, the pace and timing of the film does very little to allow the characters to engage with these themes. There is so much time to develop on Duvall’s character and, in turn, explore these themes. Instead it’s wasted on the petty dialogue and otherwise ridiculous scenes (getting a haircut and photo taken, for example) that have a scant contribution to such ideas anyway.

It’s fitting that the film is called Get Low, because it has evidently done so to the point that the quality of it is shameful enough. Schneider had a lot of potential with this idea, and it’s clear that it has all gone to waste on such poor characterisation and atmosphere. It feels rushed and counterfeit, something that could have been fixed with a little more development on the production as a whole. 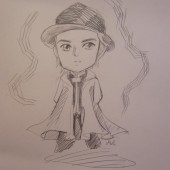