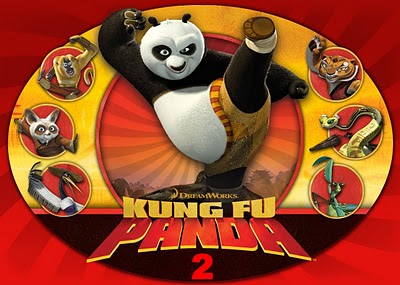 Jack Black is back in a big way as the fun and lovable karate chopping
Po in DreamWorks Kung Fu Panda 2. It Is not often that it happens but
it’s really awesome when it does, KFP 2 is better than the original!

I’m serious and it’s not just that the script is so fun. This movie
gets quite a few things right. First and foremost this is a great
continuation of Po’s journey and not just some random “next”
adventure. Second, for the first time in a longtime KFP 2 gets the
whole 3D thing right. I mean thoughout this film you’ll be reminded
that this time your money didn’t go to waste and instead you’re
finally being treated to a visually stunning experience. Recently I read a certain
“thumbs up, thumbs down” critic complained that the 3D took away from
the experience and made for a darker picture. He couldn’t of been more
wrong with this one as nothing is lost.

I also enjoy when a sequel is able to bring back the original cast and
for KFP 2 the gang is all back to rejoin Po on a whole new, even
better journey. Reprising their roles as the “Five” is the sultry
Angelina Jolie as Tigress, the distinctive Seth Rogan as Mantis, the
legendary Jackie Chan as Monkey, the hilarious David Cross as Crane,
and the gorgeous Lucy Liu as Viper.

Dustin Hoffman’s Shifu is only upstaged by the performance Gary Oldman
turned in as the evil and vengeful Shen, a razor-feather weilding
peacock whose got an army of gorillas and wolves led by none other
than Danny McBride. Oh, and chew your popcorn too loudly and you’ll
miss it but the Master Croc character is actually voiced by martial
arts tough guy Jeann-Claude Van Damme!

I’m not giving any of it away with this one so you’ll go see it for yourself.

Will Ferrell’s Semi-Pro only Semi-Worthy