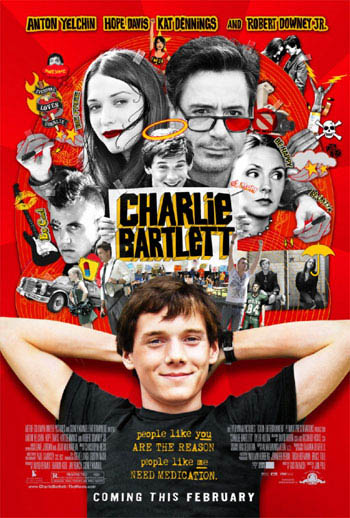 It’s no surprise that high school, teen comedies of all sorts resurface every now and then on the big-screen. They were popular in the 70’s and 80’s and for the most part worked in those eras. This kind of film, if done incorrectly, can be boresome, tiresome and radiate an air of unoriginality. Fortunately, however, Charlie Bartlett does enough to appear fresh and enjoyable while at the same time providing a dose of nostalgia to any fans of the genre.

Charlie is a smart, young, misbehaving 17 year old who has a habit, despite his good grades and attendance, of stirring up some kind of trouble and getting expelled from the private schools he attends. As a result his mother decides to send him to public school, to see if interacting with everyday teens will suit him more. Once there he soon becomes popular after becoming the school’s psychiatrist and provider of prescription drugs to the students.

The tone of the film is what stood out to me straight away. Peculiar and erratic it never quite settles for very long into a consistent pattern but rather veers from one tone and genre to the next. It goes from teen comedy, to drama, from message piece to a satire of genres. It never lets the viewer feel as though it’s in a set type of film and as a result the film is both better and worse off for it.

I don’t think it was intentional for the film to explicitly reference any teen comedy films of the past. But it’s inevitable that whatever you do within this type of sub-genre it is going to raise some comparison from viewers. Some may say Fast Times At Ridgemont High, other will say Ferris Bueller’s Day Off, but for me Bartlett most resembles the 1998 Wes Anderson film Rushmore. Both tell the story of a rich student inspiring other students of a high school and becoming the centre of attention. Apart from the quirkiness that is apparent in Rushmore but not here the two really resembled each other, at least to me. Not so much that it seemed like theft of ideas and style and you certainly couldn’t mistake one for the other but there was just enough there for me to draw comparisons.

The performances were overall a pleasure to watch. Yelchin is refreshing and a joy to witness as the title character, Dennings does a great job of keeping the fairly underdeveloped girlfriend character watchable and enjoyable, Davis brings a certain offbeat quirkiness to the mother character, and, not surprisingly, Downey Jr is fantastic. Anything, and I mean anything, that he’s in he’s utterly superb. He manages to somehow play so many different kinds of characters in so many different, brilliant ways but at the same time bringing his usual quirks and likeable nature to the table, no matter what the role. He doesn’t quite steal the film, as Yelchin gets considerable more screen time and attention, but I don’t think that was the point. Downey Jr is quite happy to sit on the sidelines and allow it to be the Yelchin’s film but at the same time providing that extra something.

On top Charlie Bartlett is a semi light-hearted teen comedy about a student entering and gaining the popularity of a public American high school. Underneath it tackles some tough subject, including drug taking, bullying, abandonment and at one point even suicide. But despite those subjects being addressed it doesn’t enter such a serious area that it stops being a comedy, although at times a fairly dark comedy at that. The film is almost always kept focused on the title character, someone who is fascinating and very watchable as he interacts with the students, helping them with their problems, and his developing relationship with his girlfriend and the principal of the school.

It will be more than likely that the age group Charlie Bartlett revolves around won’t go and see it. It may be a bit of a small film to draw the masses, and even on DVD I don’t think it seems different enough from the rest of the high school comedies to do all that well. Which is a shame because although the tone shifts a lot more than it should and it doesn’t add all that much to a well turned genre it still is worth seeing for a fresh lead performance, some smart insight into high school life and just a general likeability that’s refreshing to see in 21st century cinema.