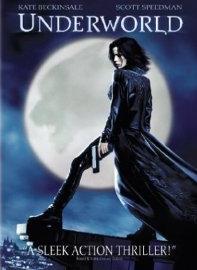 Six years before “Underworld: Rise of the Lycans” fully revealed the origins of a war between vampires and lycans, we were flung head-long into the fray with 2003’s surprise hit “Underworld”.

“Underworld” follows Selene (Kate Beckinsale), a vampire who is a member of an elite group of lycan hunters known as “Death Dealers”. As the centuries-old blood feud between the two races rages on, Selene and her fellow vampires believe that the lycans’ days are numbered. However, when an unsuspecting human (Scott Speedman) becomes the focal point of the conflict; everything Selene believes about the war, her heritage, and her mission may change forever.

Upon its release “Underworld” presented audiences with a new take on vampires and lycans (typically known as werewolves). Long gone are the days of Bela Lugosi’s undeniably iconic “Dracula” or Lon Chaney, Jr’s “The Wolf Man”. Now, we are presented with vampires decked out in sleek, leather outfits, packing modern-day weaponry and martial arts influenced fighting styles. Plus, lycans that have never looked as menacing or believable as they do in this film.

Not to mention, the lycans’ transformations (a nearly seamless blend of CGI and practical effects) are some of the best committed to film to this day. One thing is for sure, these are supernatural beings and monsters for the new, post-“Matrix” generation of moviegoers.

Written by Danny McBride (“Underworld: Rise of the Lycan”) the film wastes little time jumping into both the main crux of the story (i.e. the specifics of the two races, the war, and so on) and the fast-paced, hard-hitting action sequences. For the most part the story does a terrific job in balancing the plot with the action, interspersed with brief tidbits of the history between the two races. However, at times the plot feels a little too rushed in order to keep the momentum going, resulting in some uneven, almost jumbled aspects to the story.

That being said, in the end those moments are overshadowed by the fact that Danny McBride did an excellent job of crafting a story that introduced us to a complicated war between supernatural beings. While the director, Len Wiseman (“Live Free or Die Hard”) skillfully guided the story to cinematic life complete with style, an eerie atmosphere that blended the familiar with the supernatural, and a terrifically cast group of actors and actresses.

Speaking of the cast, let’s begin with actress Kate Beckinsale (“Pearl Harbor”) as the leather-clad vampire Selene. Kate’s performance was generally stoic and emotionless, which makes sense given she is portraying a member of the so-called undead. However, there were some brief glimpses of newfound emotions boiling to the surface and Kate’s handling of Selene’s bewilderment to the aforementioned was completely natural and effortless.

Also, seeing a female vampire doing a majority of the action was an interesting change of pace for this type of film, but a welcome one at that. Kate handled herself in the action sequences in such a strong, confident manner that she quickly solidified her character as one not to be messed with.

Actor Scott Speedman (“Dark Blue”) was good in the role of Michael, the human that the lycans are focused upon. However, I did find that occasionally his acting felt a little forced. Perhaps he was over-rehearsed so that the scenes couldn’t flow naturally for him. Even so, acting wise I don’t believe he is up to par with some of the other, more accomplished cast members.

Of course, the fact that a vampire/werewolf movie actually has acting that was good enough to set standards for the entire cast is surprising in itself (at least in my estimation). That alone should indicate that this film is not just another one of your typical, run-of-the-mill monster films where the acting is the last thing on anyone’s mind. This film’s cast actually seemed to take pride in getting their characters right and making them interesting to the audience, while still holding true to the archetypes being portrayed.

Speaking of those cast members that set the aforementioned acting bar; aside from Kate Beckinsale, we have the two talented actors chosen to play the respective leaders of the two races, actors Bill Nighy and Michael Sheen.

As the vampire king, Viktor, veteran actor Bill Nighy (“Pirates of the Caribbean: Dead Man’s Chest”) commands both respect and fear with his portrayal that was at times endearing, but could then be utterly cold, calculating and undeniably evil. His layered performance elevated the character of Viktor from being just another one-dimensional despot to a complicated being that was very real despite his supernatural disposition.

The ever-reliable actor Michael Sheen (“Frost/Nixon”) as Lucian, leader of the lycans, brought a quiet strength to the role that belied the ferocity lurking just beneath the surface. His performance was laced with such subtle malevolence, so that whenever his character would snap and unleash the inner beast it was almost startling; despite the fact you knew it had to happen at some point.

With such generally strong performances, fast-paced action and stunts, and solid storytelling, “Underworld” is without a doubt an excellent monster movie in every sense. The film successfully brings a centuries-old war between supernatural beings to life in a way that is interesting and above all, entertaining.

“Underworld” is rated R for violence and language.