Steve Martins rom-com stars Claire Danes as Mirabelle, a young shop attendant and aspiring artist who moved to Beverly Hills from Vermont in some personal quest that she hopes will find her love and a career. What she finds is a mundane life to herself.She meets two men. Firstly, she meets a young hapless amplifier designer, Jeremy, (Jason Shwartzman in another pleasantly comical performance) who has nothing to offer her and with whom her first sexual encounter is as disjointed as his concentration span. Next, she meets Ray Porter (Steve Martin) a suave, wealthy, aging divorcee, who showers her with gifts, romance and passion but who but is unable to offer her his commitment or love.The three leads are admirable, convincing yet not astounding, as is the direction by Anand Tucker, who mixes humour and drama at an easy pace, capturing fully the solitude often found in large, materialistic cities.The main issue I had with the film was what I found to be a confused narrative. Although we view the story through Danes eyes, it is Martins voice we hear during any voice over, which to me felt out of place and unnecessary. I can only guess that during his screen adaptation of his novella on which the movie is based, Martin struggled to drop his narration which would have felt more natural in the pages of a book. In the movie he really only spells out things that we could have pieced together from the story and performances.If you’re a fan of Steve Martin, as I am, then you may or may not enjoy this movie. His usual zany and manic performance takes a back seat here, he plays the straight guy to Schwartzman’s comic relief. The humour from Martins own performance, and indeed his screenplay, relies on awkward moments and uncomfortable relationships, making it more like The Office than LA Story.Overall, its an above average, elegant effort, which makes for easy viewing, but its hardly riveting. You should be entertained, but I hardly think that Shopgirl will go down in cinema history. 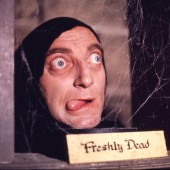