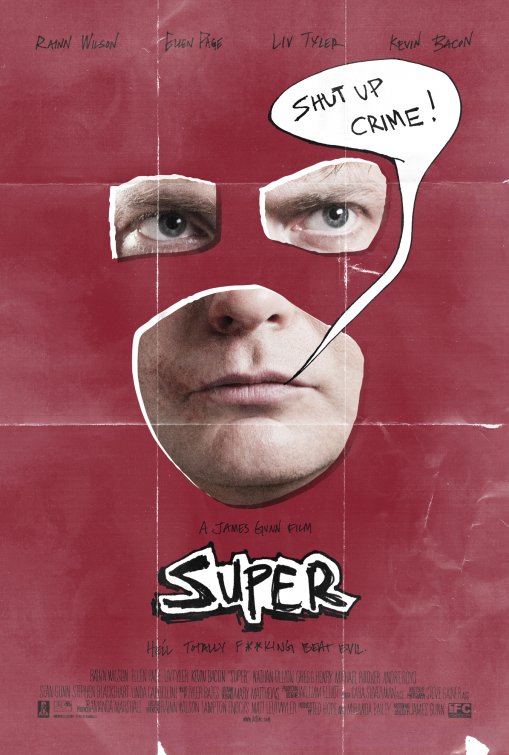 From Director/Writer James Gunn comes the latest installment to the “regular-guy-becomes-a-super-ish-hero” genre, Super. Starring Rainn Wilson as the geek turned hero and Ellen Page as his overly enthusiastic sidekick.

After Frank D’Arbo, played by Wilson, loses his wife Sarah, played by Liv Tyler, to a drug dealer, played by Kevin Bacon, this “everyday guy” transforms himself into the Crimson Bolt, a superhero with the best of intentions, even though he lacks any heroic skills. While researching for his alter ego he meets Libby, played by Page, a comic book store clerk with a fetish for real life superhero’s. Also, influencing Franks transformation is a Christian television superhero named The Holy Avenger, played by the hilarious Nathan Fillion.

After taking to the streets to fight petty crime the Crimson Bolt starts to get public attention from both the cops and the news. Franks motivation is not fame but to rescue his wife from her new drug dealer boyfriend and he won’t stop until he does just that.

The storyline was crude, rude, and thoroughly entertaining. The blunt reality of these characters, their interactions, and the consequences of really trying to be a superhero all stand up to the test. The small budget feel makes for a great addition to the overall impact that this movie has.

Rainn Wilson is genius as the Crimson Bolt. His quirky attitude, off center look, and moral foundation make his thrashed together costume to really come to life. Ellen Page added just enough gung-ho fan-girl to her role as Boltie to make it her own.

When deciding what to give Super you can’t help but to think 5 out of 5! A definite recommend for anyone whose even remotely interested in the comic book/superhero genre.