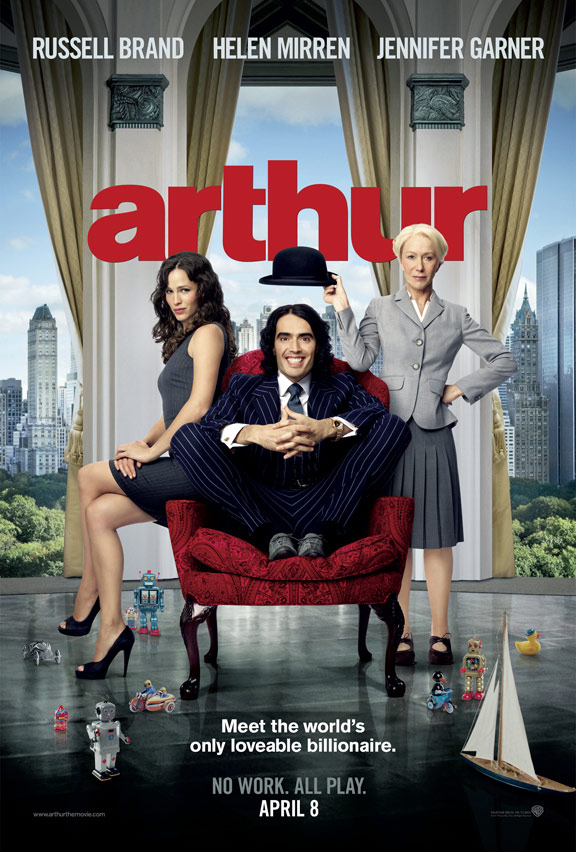 From the minds of writers Steve Gordon, story, and Peter Baynham, screenplay comes the 2011 remake of the 1981 big screen hit by the same name. This time director Jason Winer has the hilarious Russell Brand and the ever so talented, celebrated actress Helen Mirren.

Arthur, played by Brand, is a drunken playboy whose mission in life is simply to enjoy life in all its drunken grandeur. Every move he makes is closely watched after by his faithful, life-long nanny Hobson, played by Mirren. Eccentric and constantly intoxicated Arthur is pampered beyond anything seen before. He suits up as Batman along side his faithful servant Bitterman, played by Luis Guzman, he empty’s a cash machine into a crowd of less fortunate people to “end the recession”, and diverts thousands of people from Grand Central Station just to impress a girl. But, when he publicly embarrasses himself and it effects the faith people have in the future of his families business he mother issues him an ultimatum, marry the woman, played by Jennifer Garner, his mother has chosen to “reel him in” or lose his billion dollar inheritance. Unfortunately, Arthur has met a woman on his own, played by Greta Gerwig, and for the first time in his life may have found something he cares about more than money or booze.

Russell Brand is perfect as the wild Arthur. I can’t even imagine an actor today that could embody this character as well as Brand. Although, until I got use to it, my only criticism of his performance comes from the way he delivered his dialog. He seems to be doing a soft impression of Dudley Moore’s original Arthur.

Helen Mirren was excellent, as always, in her portrayal as Hobson, a role that was originally written for a man. And even without heavy make up and intentionally trying to play down her looks she is still gorgeous. She even steals the spotlight from Greta Gerwig, who did a good job and was meant to be the leading lady, but ended up being overshadowed by Mirren. Supporting cast member Luis Guzman is hilarious as Brands loyal sidekick delivering a noteworthy performance. Even the unlikeable vixen character Jennifer Garner plays was done as borderline believable as possible.

Overall Arthur is an entertaining, well paced, comedy that will have you laughing out loud with enjoyment. I give it an enthusiastic 3.5 out of 5 stars.