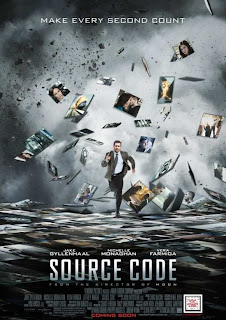 Source Code follows a soldier, Colter Stevens, (Jake Gyllenhaal) who awakens to find himself on a train heading for Chicago. After talking to the stranger opposite him, Christina (Michelle Monaghan) who seems to know him well, he goes to the bathroom and standing in front of a mirror sees another person staring back at him. As we think about what on earth is going on, the train suddenly blows up and he wakes up, again disorientated, to another scenario. Leaving all those questions unanswered, it kind of drags you in!Now within a dark room we find he is linked to a program, the source code, that uses shadows of peoples memories to relive the last 8 minutes of their lives. Goodwin (Vera Farmiga), a sympathetic operator of the source code sets him the task of finding the train bomber so that other attacks that have been planned later in the day can be stopped before they occur.

When I watched this movie, I thought that it was going to be solely the whodunit mystery revolving around the train and the identity of the bomber. However this is not quite the case as Colter finds himself unsure of his surroundings while not in the source code. This leads to the viewer having two riddles to solve- on the one hand who is the bomber and on the other the mystery behind who has put him into the source code and why is he there. I feel this puzzle within a puzzle adds to the excitement giving the movie several levels to work on.

The one thing that this movie had to contend with is the potential for there to be large scenes of repetition whilst Colter is on the train reliving the same moments again and again. This is well handled with enough variety that you become more intrigued by what he is going to do next and start demanding that he pick on a particular character that you have had your eye on for a while rather than the one he is currently investigating.

The movie is well acted with Gyllenhaal in particular putting in another strong performance to follow up his one in Love and Other Drugs with the relationship factor once again playing a strong part in his role in the movie. In general though the acting is impressive and I look forward to Duncan Jones next foray into the movie world because after this and Moon he has a lot of pressure to deliver something exceptional.

The only slight issue I have with this movie is something I can’t really talk about until you have watched it. So all I will say is this- I was not a great fan of the way things ended.

Source Code looked like it was heading for a good haul before it was released and it does not fail to disappoint. I was never falling off my chair in anticipation but it is a cleverly thought out plot that is executed well with good CGI, acting, music and enough mystery to pull you through to the end. Not a classic but a very good watch none the less.

For further reviews feel free to check out: http://www.fanaticalaboutfilms.com

Lets have a think now. I'm 23 and still delaying starting my life by remaining a student studying for a masters degree. I've always loved watching films and recently developed the desire to start writing about them as well. I set up my blog (see below for shameless self plugging) and would love to get into the critic business. What with the chances of that being almost non-existent though I'm just happy getting my reviews out there so they can get a few views and I can hopefully help people choose some movies to watch. Happy reading...

Transformers: Dark of the Industry