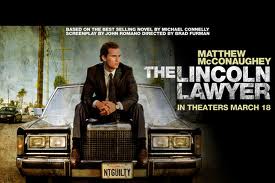 Best selling author, Michael Connelly’s novel The Lincoln Lawyer emerged from a real-life “back seat” lawyer Connelly once met.  So it came as no surprise when the novel, The Lincoln Lawyer was optioned for a big screen adaptation starring, Mathew McConaughey, Marisa Tomei and Ryan Phillippe.

After a string of sappy romantic comedies, actor Mathew McConaughey finally returns to the screen with some serious acting , a splash of charisma and a drop of his down home Texan drawl –  in this gripping legal thriller. As criminal defense attorney, Mickey Haller, McConaughey displays  a combination of swagger and laid-back sarcastic wit – which is where McConaughey really shines – he is definitely suited for this role. 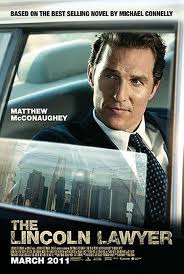 The Lincoln Lawyer is a story about Mickey “Mick” Haller (Mathew McConaughey), a California lawyer  with the skills of a (street) hustler which he uses to manipulate the system, his clients and anyone or anything else to benefit his clients’ case(s).  Some of his “associates” include a rumpled private eye Frank Levin  (William H. Macy), Earl  (Laurence Mason)his  loyal driver, and his on-call bikers with special resources.

Contrary to the film’s title, “The Lincoln Lawyer”, Mick is not literally working out of the trunk of his Lincoln Continental – he is more or less wheeling, dealing, and finalizing some transactions from the backseat while on the road, but  the majority of his business is conducted in the courthouse and other venues where the action occurs.

Mick was not initially eager to take on a case brought to his attention via a tip from low-life bails bondman Val (John Leguizamo), but when the  potential of a big payoff is thrown into the mix, Haller is reeled in, and takes the case of pampered, rich  Beverly Hills, “golf-playing-ass”, Louis Roulet (Phillippe),  who claims to have been framed for the brutal beating of a prostitute he met in a bar.

During the initial meetings, Louis is convincing in his plea of innocence and the case looks like a slam-dunk for Mick. However, in the course of finding out more about clean-cut Roulet, attorney Haller becomes less and less convinced his client – is the innocent framed rich boy Louis and his control-freak of a mother Mary Windsor (Frances Fisher), a real-estate mogul who believes that money can be usefully thrown at any problem – claim him to be. Moreover, Roulet takes the attorney-client privilege concept a bit too much to heart, as his actions reveal less of a frame for assault and battery to something even more sinister. 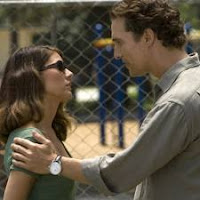 The underused Marisa Tomei as the long suffering prosecutor from who Mick is divorced – is still willing to help him out on occasion, brings some realism into the story as the mother of their daughter.  Along with that, you can’t help but be truly appreciative of Director Brad Furman who wisely involves actual events and shoots areas of Los Angeles that haven’t been shot a millions times before.

According to some reviews, The Lincoln Lawyer fails to engross the audience – I disagree, I thought the film engaged the audience’s attention as Mick becomes more humble as he feels compelled to rectify the verdict of his arrogant client  and at the same time, redeem his wrongly accused former client Jesus Martinez (Peña) who waits out a life sentence in San Quentin.  I also do not think the audience will find all the twist unsurprising.  However, I am in agreement that the roles of the other actors, (Bryan Cranston, Michael Pena, Michael Pare, Trace Adkins) could have been made better use of in plot development.  Yet, I’m torn with that concept as well; because perhaps in doing so, the movie would have grown too many legs and walked us through a lengthy unending series of events. That said,

The Lincoln Lawyer is a substantial crime-laced drama worth seeing.  It is a well written story with first-rate acting, that offers plenty of intrigue. 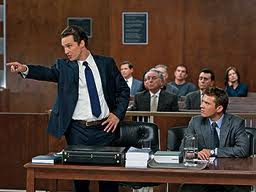 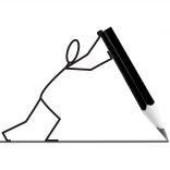