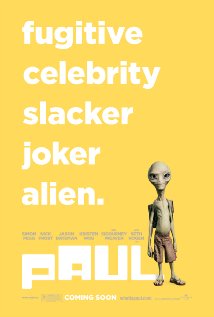 Nick Frost and Simon Pegg the writers of Shaun of the Dead and Hot Fuzz, have done it again with their latest big screen comedy, Paul. A down to Earth extraterrestrial flick that’s filled with tons of qwerky characters and some big laughs.

When two British comic-book geeks make the annual trip to Geek-topia, the San Diego Comic-Con, they figured they would see every weird character imaginable. After the convention they’ve decided to travel across the U.S. in a rented RV to visit all the famous “alien sighting” locations. But, ust outside Area 51 the two bite off more then their nerdy little minds ever imagined when they get into an accident with Paul, a real life space alien, voiced by the hilarious Seth Rogen.

Paul in desperate need asks the two to help him escape the infamous area. They agree and set out on a hilarious journey that runs them right into a one eyed Christian girl named Ruth, played by Kristen Wiig. Ruth herself is in need of her own kind of rescuing and so she joins the journey leaving her angry father in hot pursuit. Also on the groups trail is a trio of secret agents lead by Special Agent Zoil, played by Jason Bateman, and his unseen boss, voiced by Sigourney Weaver, who seemingly will stop at nothing to make sure Paul doen’t escape.

The pace of the movie is perfect, the jokes roll in regularly, and the CGI graphics that make up Paul are great. As far as the story goes it works! I like Nick and Simon’s style of film writing and making. They’ve done it again!

I recommend that if your a fan of comedy, and who isn’t, enjoy going to the movies but insist on having a good experience go see Paul when it comes out in theaters on March 18th.

Harry Potter and the Chamber of Secrets