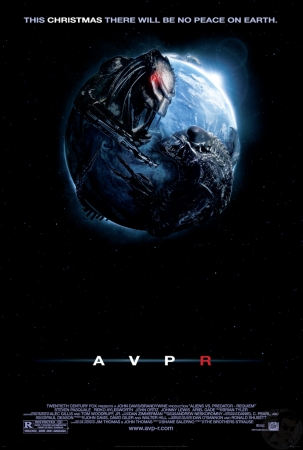 The first AVP, as bad of a movie as it was, I had some fun with. It at least had some of what fans of the previous films wanted within it and overall it wasn’t as bad as it could have been. There was some hope for AVP 2: Requiem in that there was opportunity for some kick-ass fight sequences, edge-of-your-seat intensity and perhaps some genuinely scary moments. I am sad, but at the same time not at all surprised, to inform you that the film has nothing of the sort and has little redeeming qualities to keep it from being borderline disaster.

Battling alien and predator races descend on earth and unto a small town where the unsuspecting residents must band together to have any chance of surviving.

What made the previous instalment of these franchises work, in particular the first Alien, is the overwhelming sense of dread, mystery and flat-out fear that it conjured from the viewer. Co-director Colin Strause said about this film that they tried to recreate some of what the first Alien had. Perhaps he was joking, and in all hope I beg that to be true, because all sense of anything that made the first Alien (and even some of the subsequent sequels) work is absolutely nowhere to be seen here.

Now no one was expecting a masterpiece of a film from this, nor was anyone expecting a great film in any way. But what people wanted and for some reason expected was a fun, action-packed 90 minutes of aliens actually fighting predators. We are painfully subjected to getting to know people that we quite frankly couldn’t care less about. Not only do we have to endure this bore-fest but there is also a ton of clichés as far as what the characters and sub-plots are. First off we have the pizza-boy who has a crush on the high school hottie, and then we have the hottie’s boyfriend who is a jock and an all-round total jerk. We then have the soldier returning home from war, someone who would later have some expertise in combat; if any unforeseen situation should arise that is. We also have the ex-con returning home and who is just looking for work. Throw in a dose of naiveté into the characters and a handful of oversimplified situations and what we have is one hell of a boring, waste-of-time movie.

“Well that must just be for the first 15 minutes or so, to get us relating to and attached to the characters,” I hear you say. You would think so. But no, we are subjected to this for over an hour with only a tiny pinch of aliens and predators sprinkled throughout. By the time we get to the action I almost couldn’t care less and to be completely honest I couldn’t wait to get out. When the action finally does kick in, with the exception of a few great moments, it leaves a lot to be desired. Whenever a situation, that we all want to see, involving the aliens and the predator in fighting mode it is either below-par in terms of what a fight scene should be and have or it is far too dark to see who is doing what and to whom. If I had to pick something out of the many, many flaws in AVP 2 that stood out as the biggest problem it would be the darkness of most, if not all, of the scenes and the inability to see pretty much anything that goes on.

To think of any good points about the film is a difficult task to say the least. But just off the top of my head I guess a plus point was the creature design and make-up effects. It is amazing what they are able to do in those departments in movies nowadays and it seems to me that those guys were the only ones doing their job well in this case. There are also a few moments that admittedly had me smiling and giggling at the extremity of the gore and such. Apart from that I literally can’t think of anything else good about the film, any pointing out all of the unmentioned weaknesses would take longer than I care to think about the film for.

I can’t wrap my head around how the makers of AVP 2 could mess up such a simple concept. You get some aliens and some predators and you make them fight for 90 minutes, showing humans getting killed if they get in the way. Although the first one was a bad move it at least was successful in some of its attempts, keeping in tune with the previous films from both franchises among other things. But this one seemed like it tried too hard almost to pay homage (as I’m sure the makers like to think of it as) when really it just comes off as ripping it off but obviously not as well. It has a couple of little things that are positive about the film that are unfortunately massively overshadowed by the negative. I’m sure I’m not the first to have said this but c’mon, Hollywood, I think it’s now time to lay those aliens and predators firmly to rest.