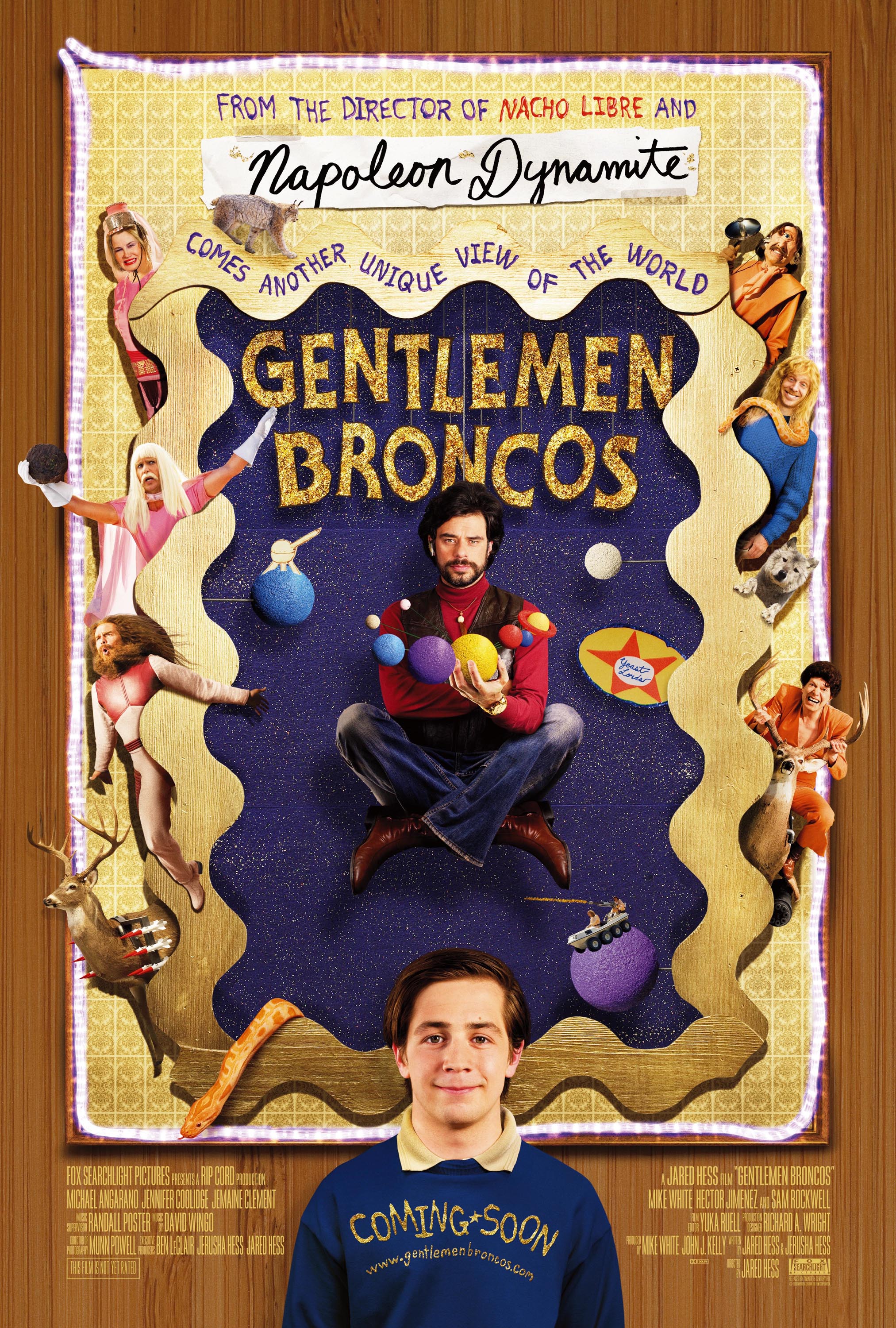 When Benjamin (Michael Angarano) attends a camp for aspiring science fiction writers, the camp headliner, famous author Chevalier (Jemaine Clement, Flight of the Conchords) steals his work, “Yeast Lords”, and passes it off as his latest masterpiece. But before young Benjamin even notices that transgression, he finds himself fighting for the integrity of the story with two amature filmmakers who have taken it and turned it into a homemade movie.

Gentlemen Broncos is director Jared Hess’ latest assault on comic timing, staging and delivery in the name of his own brand of iconoclastic deadpan quirkiness. Like Napoleon Dynamite (which was fresh at the time) and Nacho Libre before it, Broncos is another intentionally awkward, dry-as-a-bone hunk of junk. Hess assembles a freak show of characters that are weird without being funny and quirky with a capital Q, then slowly grinds out the gags like nails on a chalkboard hoping the meta-joke directed at how boring all of them are will make the lamer, obvious jokes in the movie work.

Napoleon Dynamite was all deadpan meta-joke, but in Broncos Hess tries to also flex his joke-telling muscles and the results go from dull to painful quickly. The film’s got an elementary school sense of humor, with most of the gags involving wordplay with and pictures of boobs, balls, boobs as laser canons, balls in sacks, transvestites and my God it goes on and on like this.

The other half of the gags show Hess fleshing out of his own universe and satirizing the real world topic of pulp science fiction authors and their geeky fandom. Unfortunately, every Kevin Smith and Judd Apatow movie drained this well dry long before Hess got there leaving jabs at fans who pour over every detail, science fiction names and arrogant authors falling flat. The film’s point of originality is the bringing to low-budget life of Yeast Lords, a story so absurd starring an insane Sam Rockwell that it threatens to get funny at any moment. It is populated with space transvestites who fly deer like ships who shoot missles from their side, drop bombs from their chest cavity and shoot cannons from their butt.

The film’s insane nonsequitors will charm those that like randomness for random’s sake. In what would be a climactic moment if Hess was able to construct such a moment Ben explodes and seeks to confront a man who showed interest in buying his mom’s designer dresses but has confused her for a prostitute. It may have been the first time I’ve ever seen a spark of genuine emotion in one of Hess’s movies. The more effectively built up confrontation with Chavalier doesn’t even have this kind of payoff. And as quickly and obnoxiously as it began (with a rendition of “In the Year 2525” that bores under the skin like a parasite and stays for hours), the movie comes to an improbable and anti-climactic conclusion.

Hess resists every conventional formula for a set-up/punchline comedy like he’s allergic to it. That would all be great if he could rebuild it into a work that was funny in it’s own way. The guy seems to be a one-trick poney, keeping the actors straight-faced and the gags on slow motion is his comic voice of choice and he drapes it over whatever story he comes up with. I feel like we’re now on the third re-telling of a joke that wasn’t great to begin with and has grown more tiresome with each telling.

Land of the Lost