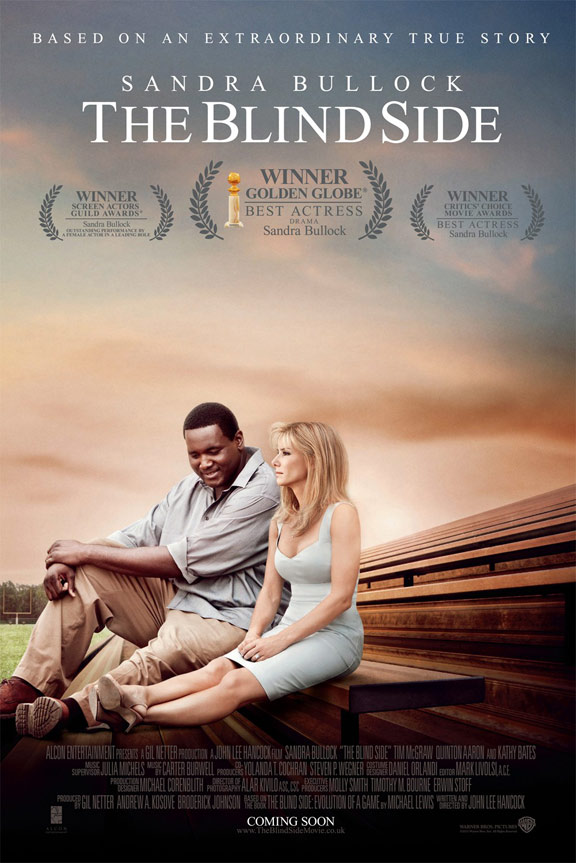 When large, uneducated high school student Michael Oher (Quinton Aaron) is left homeless by the death of his father, he is taken in by the Tuohy family at the insistence of overbearing, abrasive mom Leigh Anne (Sandra Bullock) who helps him in school and find his talent on the football field.

The Blind Side sounds abhorrent on paper. Another “based on a true story” drama calculated to “inspire” the masses who think movies are just too darn violent these days. A cliche and socially immature fantasy that a black kid can’t get anywhere without sports and the leg-up from the wealthy. A pat on the back piece of Hollywood white guilt. And, yes, the movie does have it’s share of cheesy moments but if you’ve seen a designed inspirational movie in the last several years you’ve seen a movie a lot sappier, softer and cheesier than this one.

While the movie’s cheesy, eye-rolling scenes (like Leigh Anne being inspired by Michael to have Thanksgiving at the dinner table or one of her socialite friends suggesting that the big black guy in the house might rape Leigh Anne’s daughter or a teacher nodding in approval at a supposedly insightful paper Michael writes about a book he hasn’t read) are embedded in John Lee Hancock’s book-adapted screenplay, Hancock the Director doesn’t slow down for these blips. Where another director would be more concerned with laying on the sap and swelling up the music, Hancock takes a step back, more concerned with the mechanics of football and the cause-and-events of the story.

He loosens the reigns just enough so Sandra Bullock can slip out and chew up as much of the scenery as possible. Bullock doesn’t exactly give the most dramatically complex character performance. It’s a bit of a southern cliche and she does her best Erin Brockovich here. But she’s the colorful center that brightens up the otherwise routine movie around her.

On the other end, and this is going to sound like a pile-on, the most insufferable part of the ensemble is Jae Head as Leigh Anne’s young son S.J. S.J. is the movie Cute Kid role from hell with Head obnoxiously shouting out painfully scripted lines as if trained on a sitcom laugh track and the movie letting him run rampant assuming the audience won’t be able to get enough of his gosh darn hi-jinks. It’s the one big area where Hancock lets Blind Side fall into typical genre falderal.

The correlation the movie sets up between the Tuohy family, Oher being a good blocker and his “protective instincts” skills is delightful, purely theatrical fluff. As is the ultimate NCAA investigation into Oher’s life. Does the NCAA really investigate this stuff? It’s all completely fanciful, but in that only-in-a-movie kind of way that almost casts Oher as a a big, doopy, sad, quiet superhero and those in his way as cartoonish villains. Like this guy could be out saving lives if he wasn’t a football player.

But for the inevitable cheesiness, Hancock smartly doesn’t focus the film on one thing. Not football, not Oher’s impoverished upbringing, not his scholarly attempts, not just the fish-out-of-water class story, but hits a little bit of all of them to paint us the entire picture of the story. The Blind Side worked for me because of the warm wya it addresses the relationship Oher has with Leigh Anne and her family. The heart of the film.

It’s a type of film I usually can’t get into, but through generally solid performances lead by a dynamic Sandra Bullock, an attention to detail and an avoidance of the more cringing cliches the movie teeters on the borderline but doesn’t fall into Lifetime TV movie territory it so easily could have. It’s heart is in the right place and it is far more Hollywood theatrical fluff than real life, hard-hitting, tear-inducing, cheer the underdog drama. But it’s certainly entertaining, well-made Hollywood theatrical fluff.