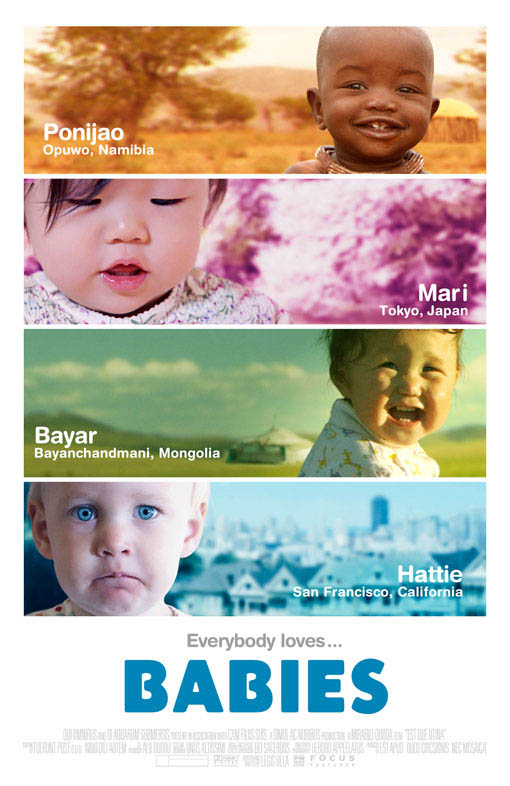 In this fly-on-the-wall documentary we see the first year in the life of 4 babies, from Namibia to Japan to Mongolia to the United States, experiencing the world from their perspective from the first time from the moments after birth to their first steps.

If you’d like, take a second and swing on over to YouTube and check out Focus Features’ terrific little trailer for Babies. Why? Because in this case, that’s the movie. That’s it. Just more of that. If you’re immediately turned off at the idea of watching babies from various countries just doing their thing for over an hour or think that that just isn’t a movie you can politely move along. Seriously, you will be bored out of your skull. For those of us intrigued by it and do want more of that, right this way…

Babies is one of the more fresh and original pieces of work I’ve seen this year. So much so that it’s hard to judge it by any tangible standard of what makes a movie – and that is what I love about it. It is what it is, sticking to it’s guns from start to finish. It is art. It is pure cinema. It doesn’t contrive a storyline for the babies. It doesn’t put thoughts into their heads. It isn’t concerned with the concerns of their parents. It just watches them. And without saying a word at all, it becomes bigger than them.

It allows us to experience the world anew from their point of view as they see, touch, taste and bond with the world around them for the first time. There are countless movies about the end of life, but slim to none about the beginning of it. And with this very simple framework, Babies brings us intimately close to it’s wonder and fragility. Where movies usually depict babies as screaming, whining noisemakers, Babies gets down on there level and lets us see how much they put up with before they get to that point. Frustratingly trying to get a round peg into a round hole or getting bopped repeatedly by the cat or an older sibling. The babies of Babies are little people in a big world looking around hilariously, often wide-eyed and bewildered, at all the bizarre creatures they come into contact with. Or in bundles wrapped so tight only their little head sticks out.

It’s also my favorite kind of documentary. The fly-on-the-wall documentary where the camera appears to roll catching the babies in unguarded, unsupervised moments where they appear rooted with instinct more adult then we’ve come to expect.  It is almost completely dialog free. It doesn’t push an agenda or a statment, but lets you make the interpretations. Any interpretation you see in this review is mine alone, and not at the prodding of the fim. For those that have experience the first year of a baby’s life and don’t find any of this new, Babies has the added socio-cultural element of cross-cutting all over the world and, without judgement, juxtuposing the child rearing styles of 4 very different cultures. It’s a celebration of different styles that interprete the same fundamental human experience.

What I got was that the babies were more durable then we’ve come to expect in an American culture that is possibly over-protective vs an African tribal culture that lets them wallow in mud and filth or a Mongolian culture that lets them crawl free. Regardless of their upbringing, all babies make it to the end of the film. And right there I applied judgement, which violates the spirit of the film, which is so undilutted and wonderfully pure. While Babies is rated PG, it does feature full-frontal nudity of a maternal, non-sexual National Geographic nature The intimacy of it’s appearance between mother and child will best be appreciated by a more mature and adult audience.

Director Thomas Balmes puts this all together just beautifully. The infant focused camera, the enlivening, but not distracting musical score. The division of the movie into themes of the babies’ lives without giving it a narrative. He’s captured some priceless footage here. But as I started with, there are no surprises in the movie. What you see in the trailer is what you get. It’s a gutsy move for a director to step so far away from his work and let the subject itself carry the film, but that’s exactly what Balmes does with Babies and because of it he’s made a movie unlike any other. I may never say this again, but this movie is just adorable.

Margot at the Wedding