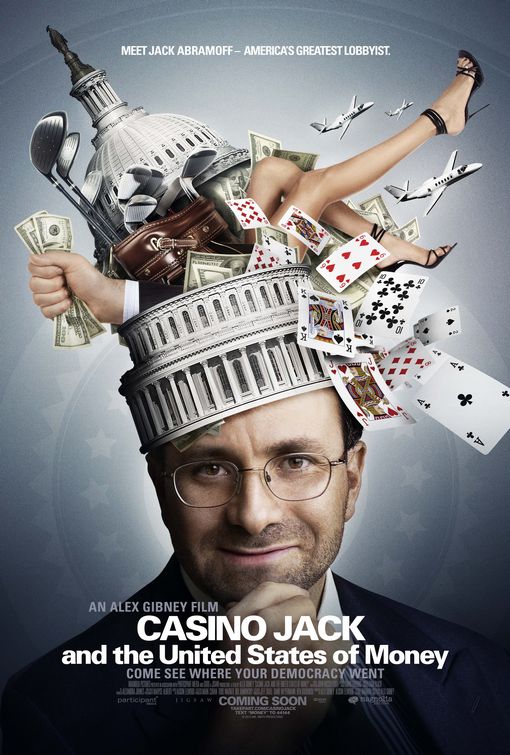 Through a series of interviews, we take a look at the rise and fall of political super-lobbyist Jack Abramoff through his strange career that began as a College Republican leading a group of radicals to a sweatshop in Saipan to his defrauding of Indian casinos across the country as a means to funnel money in part back to congress and the Republican party, but mostly back to himself.

In the loony titled Casino Jack and the United States of Money, political documentarian Alex Gibney (Enron: The Smartest Guys in the Room) uses interviews with friends, colleagues and even participants (Tom Delay game-fully sits down for Gibney) to stitch together the life story and bizarre career of Jack Abramoff, known to most simply as a crooked lobbyist who dressed in a black mobster-style fedora as he left the courthouse after receiving a 7 year prison sentence. It is quite a story indeed, so wacky and strange it begs for the big screen treatment.

It paints Abramoff as a real character, a sleazy salesman, a greedy near pathological opportunist. A leader of a radical wing of Republicans who sat down and had a conference on democracy with African genocidal freedom fighters at one point. Then from there to a movie producer of Red Scorpion, an action movie starring Dolph Lundgren in which Abramoff’s high school passion for weight lifting is worked into the climactic battle against evil communist forces. (By the way, I have to see this movie now) Behind it all, it leaves the impression of a man feverishly running from one money-making scheme to the next, especially to those sympathetic to his anti-communist paranoia. It’s almost comical the way the movie shows us already seen photographs of famous leaders and points out Abramoff in the background of them all, Forrest Gumping his way from the Reagan to Bush administrations.

When keeping with Abramoff’s exploits – some such as the Saipan sweatshop are truely tragic – Casino Jack thumps along with an entertaining matter-of-fact unfolding of an increasingly absurd true life story. It’s when the movie tries to become bigger than Abramoff is where it starts to fizzle out. It’s point: Abramoff is not just a sleazy snake-oil salesman allowed the freedom to profit just as hundreds of thousands in America do so honestly and legally, but that he is a bad apple in a rotten bunch. A symptom of the overall corruption of Washington and the output of capitalism when allowed to run amok. It’s a theme previously put forth in Michael Moore’s Capitalism: A Love Story though more vague (if that’s imaginable) and less of a call to arms than you get with a Moore movie. While neither Capitalism or Casino Jack really slam home the idea in a compelling way, the two films together should make for some good after-film debate and discussion. But it’s a single-sided debate. Is capitalism broken? Are humans inherently greedy? Does capitalism create exploitation or is it just the double-edged tool of freedom to allow those to exploit as well as those to create wealth, produce goods and grow the pie for everyone? Left unregulated does it produce life-saving leaps in medicine or the rape and imprisonment of the lower-class?

Like the CEOs of Capitalism, Casino Jack has no room for a discussion of Abramoff’s personal responsibility. It presents him as a figure, seen only through the prism of the interviewees without an interview himself. It is not a Michael Moore movie to be sure. It is far, far more fair and even-handed then that. Smartly lulling us to it’s point without incindiary bomb throwing or accusations. But Casino Jack is my absolute least favorite type of documentary. The series of talking heads style is like something you would see in a bad educational film in high school. With only a former College Republican friend, who Abramoff coerced with spy novels, there to find humor and levity in the story’s absurdity. Worse is the way it employs Moore’s tired trademark use of pop culture stock footage to liven up the proceedings. Most often footage from Mr. Smith Goes to Washington, which is somewhat ironic in that it is a passive admission that crooked money-influence politicians have infested Washington long before Abramoff got there.

In the end the movie simply calls for “vigilance”. But by that point it’s nearing it’s ungodly 2 hour running time and ran out of steam about a half hour ago. It’s to the film’s detriment that it ultimately is only interested in Abramoff as a figure to make a point about capitalism because it is fascinating and entertaining when telling his life story. It keeps a thick pane of glass between us and it’s subject, never wanting to delve into his life for fear of humanizing him in some eyes. If the idea that political lobbyists corrupting the system is new to you, give Casino Jack a shot and you might find it eye-opening. Others might have flashbacks of being trapped in a classroom desk while talking heads drone on at the front of a dark room waiting for the bell to ring.

The Piano Tuner of Earthquakes