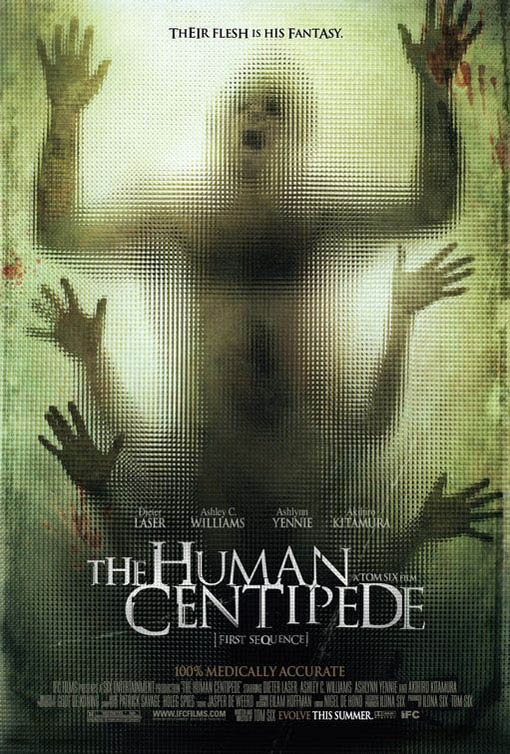 Two American girls stumble on the home of a doctor after their car breaks down on the side of the road during a German vacation. The doctor soon drugs them with Rohypnol and they wake up in hospital beds in his basement next to a third kidnapped victim. The doctor explains that they will be part of his latest surgical procedure. A nationally renowned specialist in the extraction of conjoined twins, the doctor (Dieter Laser) plans to create a conjoined animal out of the three people by fusing their mouths to their anuses to create a 12-legged pet with a single gastro-intestinal system. The Human Centipede.

And who says there are no new ideas?

That’s the alluring appeal of The Human Centipede. For the jaded cinemaphile, writer/director Tom Six promises a horror movie concoction so sick, strange, horrifying and unique that it sounds epic. A mad scientist, attractive and stupid stranded women and a sinister experiment that indulges in the population-of-1 fetish of the doctor for the abuse of the participants. A sexual fetish mixing blood, dominance and feces. This is classic, cliche z-grade movie stuff here, guaranteed to make for a cult classic even if that classic status is that of a future Troll 2 or Manos: the Hands of Fate. A movie so dumb and poorly made that would probably be extremely entertaining to get together with a group of people and make fun of it. A modern film as worthy of the Mystery Science Theater 3000 treatment as any misguided, misdirected, self-indulgent work of it’s filmmaker as anything.

Watching Dr. Dieter (Laser) look lovingly at his Dog Centipede photos, hunting down a victim with a rifle that pokes out of his trench-coat or burying full-size body bags in his yard in broad daylight, I did get the idea that Human Centipede was a Manos for a new generation. Much of it lies squarely on the creation of Dieter. Written to do randomly idiotic things by Six and played with a laughable over-the-top intensity by Laser, Dr. Dieter comes off more annoying and pathetic than a menacing villain. One of my favorite ridiculous bits is when Dieter is chasing down the human centipede as they try to make their escape and he stops to lick it’s blood off the stairs.

Even though an original idea gives him the keys to the perverse movie kingdom, Six’s complete ineptitude as a filmmaker botches the idea at every turn. Not knowing it’s head from it’s butt when he comes to making a horror movie, the movie has zero suspense, zero excitement, zero style and for what it’s worth zero sense of humor or any awareness of it’s own ridiculousness. Worse, is that it stays humming along in neutral the entire running time. Six throws out this idea and relies on the base premise to prop up the entire story instead of expanding it in any imaginative direction. What do you do with a human centipede? Six has Dieter teach it to play fetch.

It’s easy to come away from the movie hating Six for putting us through such an eye-rolling exercise and not delivering a satisfying movie along with the madness. It’s a self-indulgent, dull and borderline pretentious piece of work by a guy who wants to horrify and repulse us, but lacks any ability to earn it by miles. A complete waste of celluloid on every level.