With detective Hoffman (Costas Mandylor) surviving the trap laid out for him at the end of Saw VI, he now sets out to stop Jigsaw’s widow Jill (Betsy Russell) for control of his legacy. When Jill goes to a local cop (Chad Donella) for help he finds himself trying to stop a new game targeting the leader (Sean Patrick Flanery) of a group of Jigsaw survivors who seeks to find the life-affirming good in the death traps they were put through.

When Saw debuted in 2004 it offered a fresh take on the slasher genre and a very welcome return to gruesome, horrifying R-rated gore against the trend of neutered PG-13 J-Horror remakes.  Oh how the pendulum has swung. 6 years and 6 movies later, Saw is the inspiration for the phrase “Torture Porn” and gave us the millenium’s first icon of horror. Jigsaw began as a truly menacing villain. Presenting himself on video tapes as a clown puppet sadistically telling the poor souls in his traps that he just wants to play a game. The twist, and the interesting thing about Jigsaw, was that he didn’t actual kill anyone, just put them in situations where they had to kill someone else or give up their vanity, spill blood or limb for a chance at freedom. But they had a fighting chance. And the victims of his traps: druggies, drunk drivers, crooked cops, people who Jigsaw deemed to be either a social pariah or took their life for granted. He was giving them the chance to be reborn in blood, an opportunity that he did not have as Jigsaw’s alias John Kramer (Tobin Bell) is revealed to be dying of cancer.

The first Saw was inventive and creepy, deserving it’s place as a keystone horror movie. It jumped the shark in the final minutes with a deliriously, wonderfully absurd twist that torpedoed the movie’s chances as a serious menacing horror flick, but did a terrific job of shocking and spinning the head of it’s audience. It also cemented Charlie Clouser’s theme as one of the most catchy and exciting in recent history. It was just right and I was good with that. But unable to not beat the life out of a good thing Lionsgate commissioned an immediate sequel before we asked for it. Then another, then another. Each sequel playing like a game of  telephone in which the writers made it up as they went along. Saw II had a pretty clever twist as well, but that was the last of them. III is awful, 4 and 5 are pretty worthless.

Then VI comes along and with an unusually sharp script taking Jigsaw’s brand of life and death games into the topical political hot button of Health Care and insurance coverage, writers Marcus Dunsten, Patrick Melton and new director Kevin Greutert delivered the best Saw film since James Wan’s original.  A film that even managed to tie together a lot of the nonsense from 3, 4 and 5. I gained respect for the series as a whole for at least trying to tell a complete story and not simply putting their villain in a new environment (“Jigsaw in Space”, “Jigsaw takes Manhattan”, “James Wan’s New Jigsaw”, “Bride of Jigsaw”) or descending into a campy self-referential horror/comedy as most movie series would have done by the third or fourth entry.

Serves me right for having high hopes going into Saw 3D, presumably the last in the Saw series – at least with this current storyline. Saw 3D is a colossal splash of cold water to the face that delivers exactly the junky horror the series got away with in 3, 4, and 5 and laughs at us for expecting anything more ambitious or cohesive. Instead of ending the series with a bang, it goes out with a whimper. Saw 3D reaches new heights of absurdity, piles on more time-traveling twists pulled from the writer’s hindquarters at the last minute, is typically miscast and terribly acted and laps itself over and over in an attempt to appear to close up the story. Dunsten, Melton and Greutert all return. But it appears their idea of sealing up the storyline is to simply bring it full circle. The movie is filled with supposed “for the fans” references to the first film. It brings back Dr. Gordon (Saw survivor Cary Elwes) and completely botches his appearance. Taking what could have been a great surprise cameo and using him to telegraph the ending very early on.

Rarely have I seen a movie sequel that appears so out of touch with what it’s fans want to see. Saw 3D delivers very basic traps. This time with a psychology theme, with self-help psychobabble scrawled on the maze doors and an extremely elementary see, hear, speak no evil theme.  The trap storyline is been greatly truncated to make room for the detective storyline and lacks both invention and bloodletting from the participant. The movie also disappoints in the battle between Hoffman and Jill for Jigsaw’s legacy, set up so well in Saw VI, Saw VII‘s Jill is a wimp, no match for Hoffman at all as Mandylor hams it up and stampedes through the finale. Also no match for Hoffman is cop Sean Patrick Flanery who looks like the nerdy partner of the real cop who never shows up and whose attempts at squeaking out tough cop orders only draw unintentional laughs. And speaking of laughs, the biggest one in the movie goes to Jigsaw’s only flashback appearance in which Tobin Bell appears as John Kramer, incognito in a backwards baseball cap. 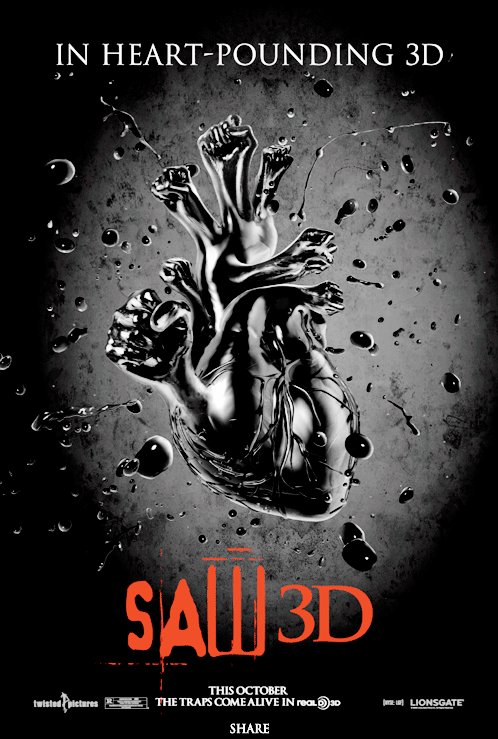 The real insult is the way Saw 3D breaks the rules of the series’ universe. There was a fairness to the traps in the past. A methodology to the game. But increasingly in the series, the fairness went away and the legitimate battle for survival gave way to Hoffman using Jigsaw’s technology for his own psychotic grudges. And the movie goes along with it.  Continuing as a pessimist of the human spirit to the very end. Refusing at every turn to take the movie somewhere thrilling or deliver a crowd-pleasing conclusion that satisfies our blood lust toward Hoffman and the wimps we want to overcome the games. There is a lot going on all at once in this movie. It leapfrogs back and forth between the story-lines, and one by one seals off any hope for a satisfying ending.

The only upside here is Greutert, who again proves to be the director who can best lens a Saw movie. He stages the traps and detective elements to squeeze them for suspense instead of the dizzying, suspense-squashing quick cuts Wan set with the tone of the first film. But Dunsten and Melton deliver a script intent on disappointing. But then, like the cut to black at the end of The Sopranos, Saw 3D delivers the same level of bad acting, unimaginative warehouse setting, obvious twists and pornographic lingering on gore that it always has. Why expect anything different? Why expect the most successful horror franchise in years to actually spend some money and open itself up beyond the tired warehouse hallways and steam rooms? Saw 3D is a bad horror movie, a bad Saw movie and a terrible ending film.

While I believe this is the end of this particular storyline with these filmmakers, there is no doubt Jigsaw will return to cinemas. If it isn’t Saw VIII next year it will be in the form of a remake or a reboot in a few years.

Let’s just hope that series doesn’t make the mistake of killing off their main villain, and movie’s biggest asset, in the third film.