Men of Honor, that title of this movie bares a lot of weight. Honor means being apart of something bigger than yourself and doing it with integrity. That is exactly what director George Tillman, Jr. set out to convey on the screen in this amazing film. Men of Honor covers the true story of Navy Diver Carl Brashear (Cuba Gooding, Jr.), a man who went to the Navy with big dreams at the wrong time. He encountered racism, a ruthless training officer (Robert De Niro), and ill luck but persevered through it all. This is a plot that usually has hollywood sensationalism written all over it, but the knowledge of this mans existance makes this one of the most uplifiting stories I have ever seen

My hat has to go off to the two leads in this film, Cuba Gooding and Mr. De Niro. This film would not have worked without the chemistry these two actors had, De Niro does a great job of giving off those feelings of grudging respect, Brashear is a man you have to admire even back then when African American men had to fight for everything they got. The subtle acting in this movie is top notch, one scene in particular when Master Chief Sunday had to reward a medal to a diver who got false credit for an act of bravery that Brashear could not get credit for, it is custom for a salute after proceedings like that, however De Niro did not look in the false heroes eyes, I do not know if this was in the script but the acting of De Niro I would not be surprised if it was impulse. Cuba Gooding Jr is an actor who has somewhat fallen from grace in recent years, and this is one of the films that I thought would keep him on the map for a long time, the man showed emotion during all the right moments and you couldn’t help but be moved by the way he portrayed Brashears determination.

The score to this flick (kudos to Mark Isham) is amazing. As far as inspirational soundtracks go this one definitely takes the cake for me it added to the tugging of the heart strings unbelievably. Props also have to go to the direction of George Tillman Jr. the scenes were beautifully shot, even suspenseful at points one examply being when Brashear is in the water searching for a lost nuclear weapon.

Overall, this has to be one of the best DVD’s in my collection. The disc features a great commentary track by the director, producer, and Cuba Gooding himself. It also includes a documentary focusing on the actual Carl Brashear which was quite moving. Anybody who wants something out of life but are talking themselves out of pursuing for whatever reason I’ll recommend this film to you in a heart beat. The cast was stellar, the execution of the story was done beautifully, long story short this film has the ability to instill honor in anybody. 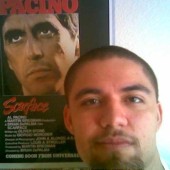