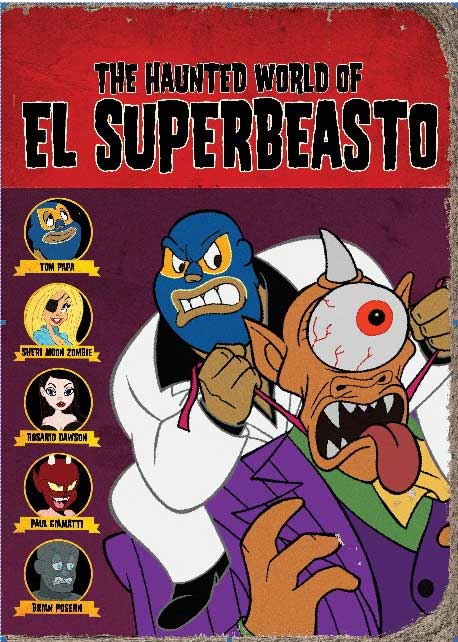 If you saw House of 1,000 Corpses, The Devil’s Rejects or both Halloween remakes and through “This Rob Zombie guy is hilarious” The Haunted World of El Superbeato is the movie for you. Apparently based on Zombie’s own comic book, El Superbeasto is the horror writer/director’s attempt at an adult cartoon, a Fritz the Cat for a new generation, loaded down with a dump truck full of colorful profanity, full frontal animated nudity and outrageously drawn gore. And even with all that eye candy, it is spectacularly awful.

I like Rob Zombie. I think he’s a fine director with a keen visual eye. But what he’s trying to accomplish here would only work in a pre-South Parkworld. The novelty of animated nudity and cursing cartoons has long past. Now we require more than that. And if you do just want cursing cartoons, shock value gags for the sake of it, a self-referential pointing out of the cartoon’s flaws or endless random pop culture non-sequitors, well, Seth McFarlane has that market cornered buddy.

Regardless, while Zombie may be talented, he is not funny. El Superbeasto is a barely-feature length laundry list of bad jokes. Really bad, cringe-inducing jokes. The movie is aggressively unfunny. And it has all the comic delivery of a sledge-hammer, shoving every bad joke in your face and surrounding it with bright neon flashing lights. And when that fails one of the girls just pops out of her top or someone farts. It’s also oddly enough something of a musical, with numbers breaking out every few minutes singing amelodically what is happening on TV (“zombie Nazis standing at a wall now”). Zombie uses a shotgun approach throwing everything he can think of at any moment. Completely bankrupt of any original ideas, the movie appears to have no sense of humor of it’s own. At one point it parodies Carrie, obnoxiously set to a song pointing out that the movie is ripping off Carrie, and the next minute it’s referencing Benny Hill, the next minute it’s referencing Captain Spalding and Zombie’s own creations.

The story, of course, makes no sense. Nothing that happens makes any sense. Even a free-wheeling anarchist comedy has to have some rhythm or some point of view of it’s own. El Superbeasto seems to require previous knowledge of the character before going into the movie. What makes Superbeasto so great and how is he a celebrity, if only in his own mind? And what of this MonsterWorld he lives in? Which is apparently populated by movie monsters of all kinds, from Michael Myers to the Alien, but also fairly normal people like Superbeasto, Suzi-X and her robot sidekick. Suzi-X is really the only thing of value in this movie. She’s the sexiest cartoon since Jessica Rabbit.

There is a sweaty desperation to all of it with Zombie cobbling together every joke he’s ever heard someone else tell into one vulgar, supposedly shocking, concoction.  Zombie probably needs to learn that delivering us a stupid idea and pointing out how stupid it is does not automatically reverse it into a laugh. Or that loud bravado alone does not make an edgy or cult picture. On top of it all, The Haunted World of El Superbeasto is the rack torture movie that will not end. Finishing off it’s simple plot and coming back again and again for more dance and musical numbers, dull elevator attendants and butt rats, to limp this thing to the feature length finish line. You’ve got to really try to be much worse than this.