In many ways, On Her Majesty’s Secret Service (OHMSS) is very similar to Casino Royale (2006). Both You Only Live Twice (the Bond film preceding OHMSS) and Die Another Day (the Bond film preceding Casino Royale)  were overwrought, expensive spectacles, more akin to sci-fi movies than real spy thrillers. The gadgets, the girls, the cheeky dialogue, the invincibility of James Bond, had taken over and replaced the wit and sophistication that we had come to expect from the franchise. As a result the producers took the next film in the opposite direction, and the first thing they did was get someone new to play Bond. Now George Lazenby is no Sean Connery, but he holds his own. And just like Daniel Craig, he was a controversial choice to fans who thought Sean Connery would always be James Bond. However, just like Casino Royale, OHMSS turned out to be a fantastic movie, one of the highlights of the franchise, even if it is frequently overlooked. OHMSS portraits James Bond as a real person, with real emotions, and capable of real love. Much like Casino Royale, the action takes a backseat to the Bond’s experiences and his growth as a character. That doesn’t mean that there is no action, just that in this Bond film they can do things that you will not see in any other film of the franchise. For this reason, OHMSS is a worthy Bond movie to watch, and it is a shame that the franchise did not continue with this style of movie, instead reverting back to the goof for much of the 70’s.

Synopsis: James Bond meets the troubled Tracy Di Vicenzo, the daughter of a mob boss. When he saves her from committing suicide, her father wishes James to marry her in order to keep her safe, even offering him a large sum of money to do it. Instead, James agrees to do it in exchange for information about the infamous Blofeld. Using this information, James goes undercover to find out why Blofeld is hiding in the Swiss Alps. When he finds out what is really going on, he is torn between his loyalty to MI6 and to Tracy…. 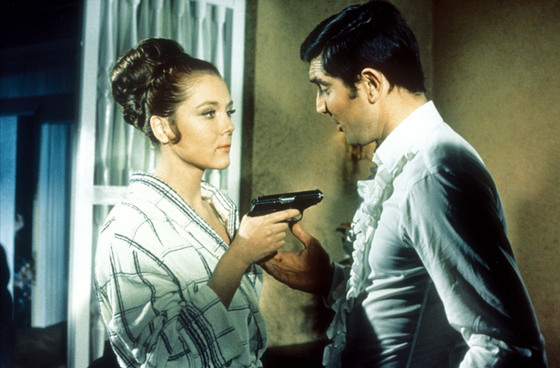 Acting: Those of you who think that James Bond should be an unstoppable killing machine who can have sex with any woman he wants will not like George Lazenby. He is a little aloof, has a soft side, and lacks the charm that other actors who played Bond had. Still, he is perfect for the role. His Bond is the most realistic until Daniel Craig, and he has a purposeful, determined demeanor about him, and I think he creates a character that is the closest to Ian Flemming’s title character. Likewise, Diana Rigg as Tracy and Telly Savalas as Blofeld are not the typical actors to be cast in their respective roles either. Both of them bring the film to a level that is believable and never over-the-top, a feat which even beloved Goldfinger can not claim to have achieved. Good (24/25)

Script/Plot: Likewise, those of you who think that a James Bond film should be all about the action, fast cars, beautiful women, and totally devoid of the e-word (emotion), then you will also be disappointed by this movie. The pacing and action is more akin to From Russia With Love than Thunderball, as James spends much of the movie doing actual spy work (getting information), rather than blowing things up or shooting people. A considerable portion of the plot is also given to the relationship between James and Tracy, (just like Casino Royale spends some time on his relationship with Vesper), but the movie really picks up towards the end. I feel that this is the type of story and plot structure that is fitting for a spy movie, even if it is a little long for a typical Bond flick. Good (24/25)

Direction: The direction, though, is edgier than you are used to seeing in a Bond flick. Director Peter Hunt gives the film an artistic flair that is not really seen again in the franchise until Quantum of Solace. The light contrast is high, which gives the movie an almost film-noir affect. The most impressive use of Hunt’s style and poise is the opening sequence, which sets the tone for the rest of the movie even if the film is not as stylized past this point. Still, in whole the movie rings true to the style and feel of films from the 60’s, including the action sequences which suffer a bit from shaky overlay backgrounds and sped-up-film (but again that was the norm in the 60’s). Overall, a very vivid and smart look to a smart movie. Good (24/25)

Special Effects: While not spectacular, the special effects and stunt work make for some very memorable action sequences. Bond’s first ski chase is gripping, and there is a good car chase bit too. But where the movie lacks in quality, it makes up for in clarity. It is very easy to tell what is happening, as all of the fight sequences are excellently choreographed and filmed (something that cannot be said about Quantum of Solace‘s choppy action). Finally, the sound track is one of the best in the series, being both memorable and innovative (this was one of the first films to use a synthesizer for its score). Some of the music was even used for Pixar’s Incredibles because it personified the spy film sub category so well. Good (23/25)