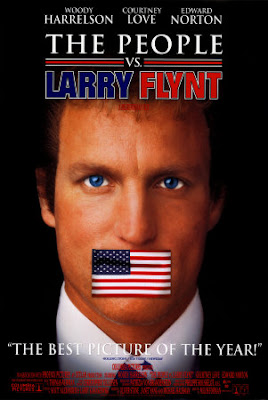 After playing good, old fashioned, dimwitted, simpleton Woody Boyd on the hit television sitcom Cheers for eight seasons, Woody Harrelson decided to break away from possibly being typecast as he began taking on more serious roles on the big screen.  Even though he was nominated for five MTV Movie Awards (Three for best kiss: White Men Can’t Jump, Indecent Proposal [which he actually won with Demi Moore], & Natural Born Killers), & (Two for best on-screen duo: White Men Can’t Jump [with Wesley Snipes], & Natural Born Killers [with Juliette Lewis], it wasn’t until the film The People vs. Larry Flynt where he earned an Academy Award nomination for Best Actor.

The People vs. Larry Flynt is a biographical film about Hustler magazine’s publisher & editor Larry Flynt (played by Woody Harrelson) & his legal troubles.  The film starts out in 1953 where we see a ten year old Larry Flynt selling moonshine in the Appalachian region of Kentucky.  Fast forward twenty years later to a nightclub run by Larry Flynt & his brother, Jimmy (played by Woody Harrelson’s real life brother).  Larry comes up with the idea to create a magazine based on his club called Hustler.  It is at the club where he meets his future wife, Althea Leasure (played by Courtney Love).  However, with the magazine comes controversy as Flynt finds himself involved in many court cases because of the subject matter of Hustler.  As a result, he hires Alan Isaacman (played by Edward Norton).  One day, when Flynt & Isaacman are finished with court & leaving the courtroom, both are shot by an unknown gunman.  While Isaacman recovers, Flynt is left paralyzed from the waist down.  Flynt decides to undergo surgery in order to deaden his nerves.  In 1987, after contacting AIDS, Flynt finds his wife, Althea, dead in the bathtub, having drowned.  Flynt decides to ask Isaacman help him one more time to protect his first amendment rights in front of the Supreme Court.

One aspect of the filmmaking which I thought was incredible was the acting performanccs by all three stars.  Woody Harrelson does a remarkable job as Larry Flynt.  He even sounds like him too.  Even though some of the things he done may have been rude, you can’t help but have sympathy for the guy not only for losing his wife, but also for standing up for his first amendment rights.  Courtney Love is superb as Althea & does a great job portraying someone with AIDS.  Edward is excellent as Larry Flynt’s lawyer, Alan Isaacman, & is excellent standing up to the Supreme Court.

The other aspect of the filmmaking which I thought was incredible was the photography.  In particular, I am referring to the scene where he is giving a speech to about a dozen people with a giant screen behind him.  He states how murder is illegal, but if you take a picture of it, you may get on the cover of a magazine.  He also states how sex is legal, but if you take a picture of it, you can go to jail.  What makes this scene great is not only what he says, but the images he uses behind him to help illustrate his point.  After all, a picture is worth a thousand words.

My overall reaction to this film is I thought it was excellent.  It was nice to see Woody Harrelson not only step outside of the comedy genre, but to take on the role of the Hustler magazine publisher & editor.  It was also nice to see Norm MacDonald play a serious role as well.  Finally, it was nice to see the real Larry Flynt have a cameo in this film.  As a matter of fact, it’s always nice to see the real person have a cameo as it shows that he/she doesn’t mind having his/her life story told.  I would recommend this film to a political science class.  Although he was nominated, it’s a shame Woody Harrelson didn’t win the Academy Award for best actor as I felt his performance was phenomenal.