The Tin Man is Indeed Heartless

To me, there are two critical questions to be asked of any sci-fi feature film. One, is it believable and two, will it date. The Terminator leaves us with a yes and yes to these queries. Our juices are set flowing from the very opening act in this tension-tension-release-tension-tension-release classic. This film was destined to become and landmark of the genre.

In present day (1984) Los Angeles, after a brief glance into a very post-apocalyptic future, we are introduced to the antagonist (the Terminator) and the protagonists (Reese, Sarah Connor).  The former role becomes quickly established whereas the latter’s relationship is becomes clearer via a series of reveals. Both the Terminator and Reese are from the future and both have an interest in Sarah Connor and it is this interplay which forms the spine of the movie around which some glorious action sequences are spun. The future of humankind depends on her, so she must stay alive.

The first thing which struck me was it is the first time that an antagonist is truly heartless. Neither last minute decision-making to allow a hero’s escape (James Bond et al) nor a crisis of conscience to dissolve hard-heartedness (Roy Batty, Blade Runner) frees us from the relentless onslaught. The Terminator is a true killing machine and he undertakes that role with a ruthlessness which has you at the very edge of your seat as you become conditioned into expecting no escape.

Not much is demanded of the actors as the visual structure of the piece is a joy to behold. James Cameron has since proven his weakness for, er, cheesy dialogue: this matters not a jot. From the very dark, almost futile, portrayal of the future to the Terminator’s ability to always track the fugitives – as he does so in the many action sequences which are so pacy that you are rendered breathless afterwards. It is a role made for Arnold Schwarzenegger; action and a few words, the latter of which can be safely delivered in a mechanical monotone. Nowhere else has the automaton suit fitted so well.

Technology has played its part too. We see the Terminator repair itself, some POV of its HUD and some nice CGI (enough acronyms already!).

It is an action movie, “red in tooth and claw”. Sarah Connor represents us – an “average Joe” – as a deer caught in the headlights of an unbelievable situation where greatness is thrust upon her from a time of which she has no comprehension. It is the fact that we empathise so much with this predicament that draws us inexorably into the action and never really lets go until the thrilling denouement. Sit back, sit forward and enjoy! 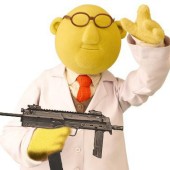