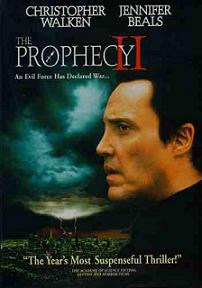 In 1995, writer/director Gregory Widen introduced audiences to the “What if” concept of a second war in Heaven. Three years later the story continues with “The Prophecy 2”.

“The Prophecy 2” begins sometime after the events of the first film, as the civil war between the angels rages on. This time Gabriel is determined to stop the pairing of a human woman (Jennifer Beals) and one of God’s loyal angels. Now, the only hope for mankind is the eventual birth of the Nephilim that could bring about an end to the conflict once and for all.

When I initially watched this installment, back when it was first released, I wasn’t too enthralled by it. I had really enjoyed the original movie, but this one’s tone felt too dark by comparison, and I didn’t think much of the angel falling for a human aspect. However, upon a second viewing sometime later, for whatever reason the movie clicked better and the issues I previously had with it didn’t bother me as much, if at all.

For starters, the darker tone made sense for the series in retrospect. After all, the angels loyal to Gabriel’s cause were becoming much more desperate; thus, having a more ominous feel suited the story’s progression. As for the romantic aspect, while still not my preference for a storyline, I do applaud the creativity and use of a Biblical basis (in theory) for doing so. What I mean is, the beings known as the Nephilim (offspring of an angel and a human as some Biblical translations postulate) are only mentioned ever so briefly in Genesis and even then no one knows for sure who or what they are, so kudos for finding that needle in a haystack.

The story written by Matthew Greenberg (“Reign of Fire”) and Greg Spence (who also directed the film) builds a little more upon the foundation laid in the first movie by Gregory Widen. The world of this series is expanded to an extent by including a few more angels than previously seen. Still, only a handful of them are given attention within the story, while the rest are just relegated to background characters and such.

Also, introducing a modern day Eden, basically a sanctuary of sorts for those Earth-bound angels fighting the war was an intriguing concept. It’s too bad more time couldn’t have been spent in exploring this idea as it held great story potential. Oh well, there’s only so much time and money to go around for one movie, I suppose.

Speaking of the Earth-bound angels, once again leading those no longer loyal to God is the always intriguing Christopher Walken. While Christopher made Gabriel undeniably menacing in the original movie, his take on him this time around is even more sinister due to his desperation to win. Just like before, Christopher balanced Gabriel’s malevolence with sporadic moments of humor, dark or otherwise, and this time was no exception. Also, it was fun to see Christopher get to explore a more inquisitive side to the character during several humorous scenes showcasing Gabriel’s lack of knowledge for human technology (i.e. the use of guns, computers, radios, etc.).

As was done in the first film, Gabriel must choose another human (or monkey as he calls us) to assist him as he goes about his dirty work. Joining him this time is actress Brittany Murphy (“Don’t Say a Word”) as a Goth chick that was unfortunate enough to catch Gabriel’s eye. Brittany’s character was featured more than Gabriel’s previous helpers in the first film, and was surprising in her attitude towards her current lot in life. Brittany played her as a genuinely conflicted individual, torn between wanting to help Jennifer Beals’ character escape and helping Gabriel to track her down. It was impressive to me to see a convincing character dilemma being played out in this type of supporting role, especially in a Direct-to-DVD sequel.

On the other side of the conflict we have actress Jennifer Beals (TV’s “Lie to Me”) as Valerie, a nurse who is thrust into the war due to her involvement with one of God’s loyal angels. Jennifer didn’t have a lot to do early on in the movie, which caused me to wonder if her character’s story arc was going to be left surprisingly under-developed while ancillary characters (like Brittany Murphy’s) received more attention. Yet, once the movie really got going her character’s story became much more front-and-center, and a lot more interesting to watch.

Still, her character’s involvement in the story did seem a little odd to me. Unlike Thomas Daggett (the cop in the first film) who clearly had faith in God before losing it and eventually rediscovering it, Valerie does not seem to have any interest in God or religion in general. I’m not saying her character’s belief should have been overtly on display from the get-go, but I do feel that there should have been some indication prior to the final 30 minutes that she did indeed believe in Him. I just thought that this aspect of her character should have been touched upon to some degree earlier in the film, rather than feeling like it was an “Oh yeah, she needs to have some faith in God” type of moment near the end.

Portraying the main human-sympathizing angel Danyael is actor Russell Wong (“The Mummy: Tomb of the Dragon Emperor”). Russell did a good job with the character’s physicality, but his emotional range seemed extremely limited, which consequently impacted his performance. For an angel that has supposedly fallen for a human, he never really seems to convincingly convey through emotions that he cares all that much for her. What he doesn’t show in emotion, he makes up for by physically being her protector, but it seemed fairly clear from the script that he was to be more emotionally invested as well. It’s too bad a better actor wasn’t given the job, because Danyael had much more potential than what was shown in the movie.

Lastly, actor Eric Roberts (“The Dark Knight”) makes a cameo appearance as the angel in charge of Eden, the archangel Michael. Even though he receives only five minutes of screen time, and even that may be too generous, Eric makes the most of the time allotted. His portrayal of Michael was intriguing, mysterious, and subtle; ultimately he left you wishing the character would have been more prominently featured in the film.

Truthfully, there are so many neat elements introduced in this entry that I wish could have been explored further, many of which I have touched upon. It’s just a shame that the limited budget afforded to a Direct-to-DVD movie of any kind restricts the story from fully fleshing out each of these aspects. However, as I stated in my review of the original film, had this been done as a huge Hollywood blockbuster you would see improvements in the visual effects and scale of the movie, but the fairly reverent approach to the spiritual matters would have been cast aside. In that respect, the route taken with this movie, and this franchise in general, was probably the best for the type of stories being told.

And finally, it’s rare when a Direct-to-DVD sequel manages to continue a film franchise in a satisfying manner, yet “The Prophecy 2” does its level best to do exactly that. Featuring a good storyline that pushes the series forward rather than rehashing what’s been done, mostly strong performances (except for Russell Wong), and a surprising ending that perfectly sets up the next installment; “The Prophecy 2” is yet another entertaining religious thriller that almost rivals its predecessor.

“The Prophecy 2” is rated R for violence, language, and brief nudity/sexuality.