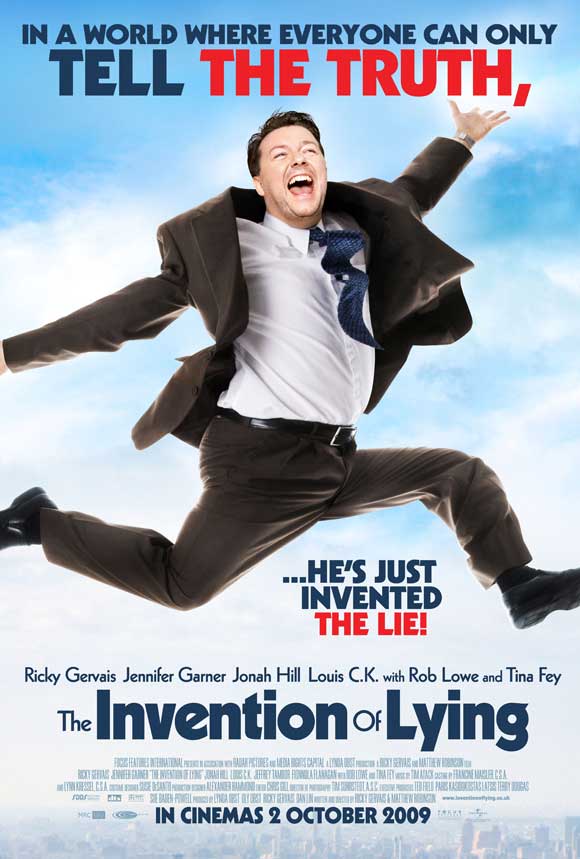 Mark Bellinson (Ricky Gervais) lives in a world where no one is capable of deception, everyone telling the truth as they see it all the time. He’s a struggling screenwriter, behind on the rent and generally not a winner of life’s genetic lottery so he has to hear about it all the time until one day he snaps and says something that…wasn’t. Now capable of creating fiction, Mark is able to bend the opinions of the gullible masses as he wishes making him one of the most rich and famous people in the world. But being rich and famous doesn’t help him win the heart of his new best friend Anna (Jennifer Garner) against her more equal genetic match, handsome, competitive co-worker Brad Kessler (Rob Lowe).

Ricky Gervais’ career is mind-boggling. With The Office, an instant TV classic that broke apart and reinvented the rules of the sitcom, as well as the hilarious and biting celebrity satire Extras he proved a master storyteller with an impish desire to challenge the established rules. But Ricky Gervais on film either doesn’t want to challenge anything. He takes cameo-sized roles well below his talent (Night at the Museum) or attempts a romantic comedy leading man role in the utterly conventional Ghost Town. The Invention of Lyingis a little bit more in Gervais’ wheel-house, but that’s the least I would expect with Gervais as co-writer/co-director. This time the movie’s failings do fall squarely on him.

The Invention of Lying is built on a great premise. How would the world be different if we could only tell the truth? More interestingly is how Gervais and co-writer Matthew Robinson broaden this to scrub out all fiction. Movies in this world are just a guy sitting in a chair telling us about historical events. An advertisement for Pepsi states something like “when Coca-Cola isn’t available”. It’s one of those ideas that is so huge that whatever Gervais does with it, it will not be enough for everyone. For my money he spends a lot of time on irrelevant or less interesting stuff to a point where the movie says more about Ricky Gervais’ interpretation of lying then about lying.

In the world without fiction he envisions people have no filter, say whatever pops into their head. The movie’s view is that without lying people would reveal themselves to be shallow, superficial and carelessly cruel, caring only about a person’s appearance and how well they will make a genetic partner for them for procreation purposes. If this basic premise weren’t outrageous enough, Gervais and Richardson deliver a clever, daring and damn near jaw-dropping turn in the story halfway through. I won’t reveal it, the “Is this movie really going to go there” feeling is too much fun to spoil. I could feel the audience in my test screening divide and halfway turn against the movie at this point.  But like the original story, the movie doesn’t quite know where to take this idea either. It makes it’s point and dies on the vine.

Not that I entirely disagree with the movie, some of the satire in the creation of this world is dead on. But some of it is also a big pill to swallow. Jokes don’t really land because it feels like you need to crawl into Ricky Gervais’ mind to get the set-up. All of this, everything, would be easier to swallow or flat-out forgiven if the film were funnier. Aside from a few conceptually clever bits and something else I’ll get to, the jokes largely tank in a big way. The movie constantly veers away from the more caustic comedy Gervais is known for and good at and into fairy tale, conventional romantic comedy territory that wants a big hug instead of a laugh. Gervais tries to soften the rom-com vibe by taking pot shots at himself which also veer toward more mean-spirited than funny. On top of the movie not being funny, it’s an embarrassing watch for any fan of Gervais’ TV work.

As she did in 13 Going on 30 Jennifer Garner plays a very good woman-child. She convey’s a child-like enthusiasm that softens what a horrible person this world without deception has allowed her to be. The supporting cast is star-packed to the point of obnoxiousness. Tina Fey, Jonah Hill, Louis C.K., Jeffrey Tambor, Martin Starr, Jason Bateman. It’s like a friggin’ Dreamworks cartoon. Looks like Gervais has cleaned out his address book of celebrity Office fans to fill the population of this movie.

There are a few brief moments of cleverness here and there that keep me from rating this a total bomb. Mainly, Rob Lowe is utterly hilarious in his far too brief appearances basically playing a more to-the-point variation on his Wayne’s World jerk many years ago. He’s clearly having a blast and those deadpan deliveries score a laugh almost every time. Another plus, the film’s musical score is terrific. It convey’s a fairy tale feeling that seems to be lurking somewhere at the heart of this story, before the fantasticism of it was squashed down and shoved through the rom-com cookie cutter. And a few of the more micro-sized cameos do work such as Gervais’ longtime creative partner Stephen Merchant in a single scene or Edward Norton almost unrecognizable.

The Invention of Lying is a great, big idea that Ricky Gervais doesn’t do anything great, big or creative with and can’t squeeze more than a few chuckles out of. It goes from good idea, to unfunny good idea, to condescending religious satire to a romantic comedy descending all the way down to the usual “get-to-the-church” climax. Unfortunately, right now, Gervais doesn’t seem to have the filmmaking experience and know-how to assemble this lofty material into a smooth, funny and consistent movie. An epic fairy tale that sheds all of that potential for a cliche, predictable, dull and unpleasant attempt at mainstream acceptance.