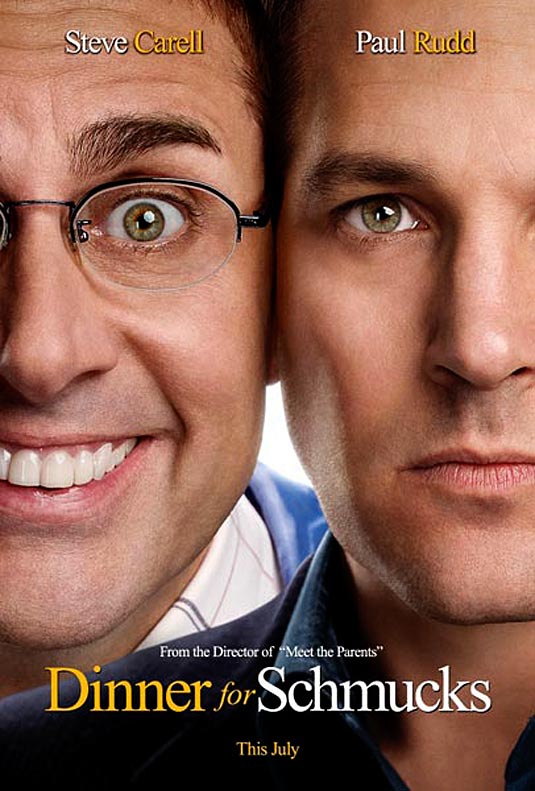 While trying to climb the corporate ladder Tim (Paul Rudd) is invited into the corporate executive inner circle where he learns that the big wigs hold a secret contest they call the “Dinner for Winners” in which they each find the biggest idiot they can and ridicule them. Initially repulsed, Tim has the perfect candidate fall into his lap in Barry (Steve Carrell), an oddball who makes dioramas out of dead mice. But Barry shows up a day early and his social ineptitude puts Tim’s already on the rocks relationship in danger and generally turns his life upside down.

Dinner for Schmucks falls squarely in that crowd with What About Bob?, The Cable Guyand that hideous Frank Grimes episode of The Simpsons in which an average guy spends the film increasingly irritated by a social baffoon, having his life destroyed piece by piece by the unknowing guy who just wants to be his friend. I’ve never, ever gotten the appeal of these stories. Is there even a sub-genre description for them? Dinner (the word Schmucks is never used in the film), is one of the more digestable entries to the genre, even if – like all of these movies – it tries too hard to make a miserable situation funny by taking the stupidity over the top.

It’s an uphill battle director Jay Roach (Meet the Parents, Recount) can’t quite traverse. Roach has proved to be an adequate comic director, but never with a Todd Phillips grasp of comic timing and staging, which may have been the only mighty hammer to move this material. Roach thankfully keeps it light, preventing any sap or relationship drama from creeping into the film and killing the mood.  The jokes move along at a steady clip, but the laughs come only sporatically with the stupid-funny stuff being outnumbered by the stupid-stupid stuff.

Ironically, the thing that makes Dinner a better Leech-Friend movie is the same thing that makes it an ineffective comedy. To Steve Carrell’s credit, the man cannot play an idiot one-dimensionally. Despite his social ineptitude it’s almost impossible not to love Barry. The backstory that evolves involving his monster of an ex-wife makes Barry a sad figure we end up rooting for in the end. This makes Tim look more like a jerk – even though his girlfriend thinks he’s already there after a great speech he makes to her about how he has to do these things to climb the corporate ladder. The depth and realism Carrell and Rudd lend to these roles makes the relationship work but the comedy not. Knowing his sad past, and not knowing why he is the way he is, it is increasingly hard to laugh at Barry’s idiocy. The movie wants us to like him and mock him and then root for him. His character is a bizarre concoction of whatever level of stupidity, man-child tendencies, heart and intelligence the movie requires at the given moment.

Yet for a few moments Dinner is laugh-out-loud hilarious. Watching Barry as a fish out of water with a friend is one thing, but putting him in his element – at the IRS in a nice burn – is another. Suddenly Rudd finds himself the odd man out as they visit Barry’s boss, Therman, who believes he can read minds – a belief perpetuated by spending his days lording over tax cheats and people like Barry. Therman is played by Zach Galafianakis in yet another role that allows the actor to steal the movie from everyone else and runs down the street with it. It’s a side-splitting sequence as is the movie’s increasingly roucous finale, a jaw-dropping set-piece where the freaks out number the executives and their own eccentricities form a comedy of errors that bring down the house.

The cast also includes Ron Livingston, whose gone from worker drone to corporate jerk effortlessly, Lucy Punch (Hot Fuzz) and half the cast of Flight of the Concords Jemaine Clement and Kristen Schaal in bits so outrageous I was shocked that they hit the floor with a thud. Dinner for Schmucks has some good laughs and effectively cringing-moments, but the ratio of groans over laughs is too high. A good, but overly silly effort that doesn’t go far enough with the humanity of the characters, the outrageousness of their behavior or the corporate cruelty behind the premise. A premise that’s potential as a satire of the corporate executive world the movie shys away from to bring us just another idiot comedy. The actual Dinner for Schmucks gets sidelined in it’s own movie.