The Pleasure of Being Robbed 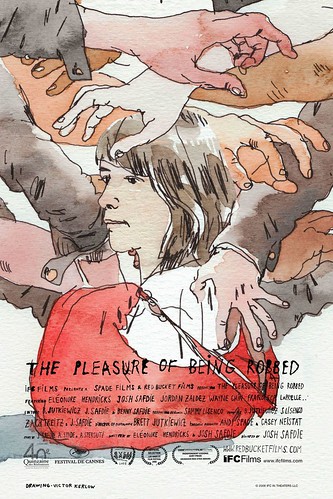 Eleanore (Eleanore Hendricks) is a slightly mentally unbalanced woman whose condition manifests itself mostly in kleptomania. The Pleasure of Being Robbed is a microscopically small little indie film from the Caanes film circuit following this single character through a few days. She steals someone’s bag with a car key in it, finds the car, a friend teaches her to drive and they have urbane, real indie movie chats about nothing. I’d say the movie were pretentious or self indulgent if it were about anything.

What’s potentially interesting about her, but not really explored just meditated in, is that she doesn’t steal for the sake of selfish thieving, but when caught going through someone’s wallet she just “wants to see what’s in it”. She doesn’t understand she’s violating their boundaries. When she steals someone’s video camera she doesn’t use or sell it, she looks at the tape to see a glimpse into the person’s life. It’s a bit like Christopher Nolan’s Following in which a man stalks people to connect with them through an act normally seen as antisocial or criminal.

Robbed starts with a potentially intriguing character and spends time with her, but doesn’t develop into a story, doesn’t pay off the set up and doesn’t doesn’t shift anything (character or story) out of first gear. It’s not particularly interesting watching her learn to drive or tour the zoo or swim with a cheesy stuffed polar bear puppet. Yeah. Filmed with a 16mm hand held camera it looks and feels like every stereotype of the Caanes indie film. Will probably only be appreciated by the most pretentious film students reaching to see profundity in it’s simplicity.  It was too cutesy and too simple plotted for my blood.

Pirates of the Caribbean: On Stranger’s Tides