What would you buy with $20 million dollars? If you are Columbia Pictures, the answer is Angelina Jolie for your latest action flick. I understand that is a hell of a lot of money, and IMO it could be put towards much better purposes, but can you really blame them? Angelina Jolie is one of, if not the top actress of the last few years, and she has the talent and skill, not to mention the appeal to make that investment worth while. Plus, every movie with a hint of action in it seems to make tons of money these days, so it is a safe bet that this sum will be recovered. What may not be recovered, though, is your brain upon viewing this movie. Its a string of entertaining action sequences strung together with a story that is supposed to be smart and thrilling like a Jason Bourne film, but ends up being illogical and inconclusive. So, like oh so many recent action flicks, if you don’t care about your movie making much sense or being believable at all, you may be entertained. Otherwise, $20 million might not seem like enough. 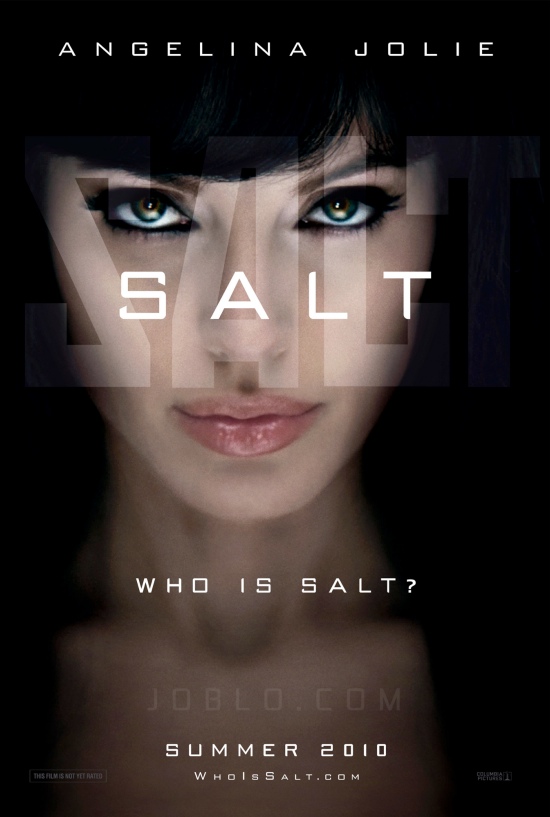 Synopsis: Evelyn Salt is a CIA officer with a loving husband and a bright future. When a Russian spy accuses her of being a sleeper agent (an operative sent to the US to be activated for a mission) she is suddenly on the defensive, trying to get her life back together and prove that she is not a double agent. In doing so though, she starts to doubt herself. Who is she really, and is she really capable of the things she is being accused of?

Acting: Jolie does a great job as Salt, portraying the character in such a way that the audience remains throughout intrigued by who she really is, or might be. Liev Schreiber is present as Salt’s coworker at the CIA, Winter. Shreiber’s performance is further proof that he needs to be given more roles, as he pulled off this complex character perfectly. Chiwetel Ejiofer plays CIA agent Peabody, and does a commendable job. The supporting cast does a decent job, but Jolie outperforms them all. If only the script would fill in the details missing from her character, then her performance would have been memorable. Good (23/25)

Script/Plot: While entertaining action is abound, the story, if anything, is too much. It tries too hard and it is so unbelievable that by the end of the flick I found myself ambivalent to the final outcome. Perhaps, it would have been better if the characters were better defined, as the audience has no idea about what kind of person Salt is. The endgame being confusion at the end of the movie about whether or not Salt is a hero or not. What is her motivation? Is it all just a cover or does she really care about the people in her life, such as her husband? I feel like the target audience is familiar with the Bourne trilogy, and because of the similarities, would be viewing Salt with preconceptions taken from Jason Bourne and his motivation to find out who he is. Salt never makes a clear boundary signifying that this film is not just another Bourne movie, and in doing so, it doesn’t make enough reasons to justify its existence in the first place. Okay (15/25)

Direction: Director Phillip Noyce knows how to make good political thrillers (Clear and Present Danger, Patriot Games) so there are no excuses why this one didn’t turn out the same. Like the Bourne movies, there is lightning fast hand-to-hand combat, but unlike those movies, it is shot in a way that makes it so you can’t tell what is going on. Too many close ups and rapid cut shots make the fight scenes seem even more unrealistic. The worst part, though, are the seemingly random “flashback” sequences inserted at various intervals between the action sequences. These tid bits are supposed to be there to explain Salt’s background, but why are they inserted into the film at points where they don’t logically add anything to the movie?  Okay (17/25)

Special Effects: While the action scenes are both entertaining to watch and filled with some good stunt work, there are one or two points in the movie where they switch to a CG Jolie, and you can easily tell. I guess they spent all their money on the real one. Music was fitting and memorable, different than you may expect. As far as the X-factor, this movie’s only real claim to fame is as a female Jason Bourne with a plot with just as many attempted twists. Good (21/25)