Supervillain Gru’s (Steve Carrell, unrecognizable) best days appear to be behind him. With younger, more inventive supervillains like Vector (Jason Segel), rising in notariety he can’t even get a loan from Bank Evil for his latest scheme. Still he forges ahead, even adopting 3 children as part of a plot to recover a shrink ray so he can – get this – steal the moon. But the three girls are just too cute, will Gru’s heart be warmed before he can get one over on Vector? 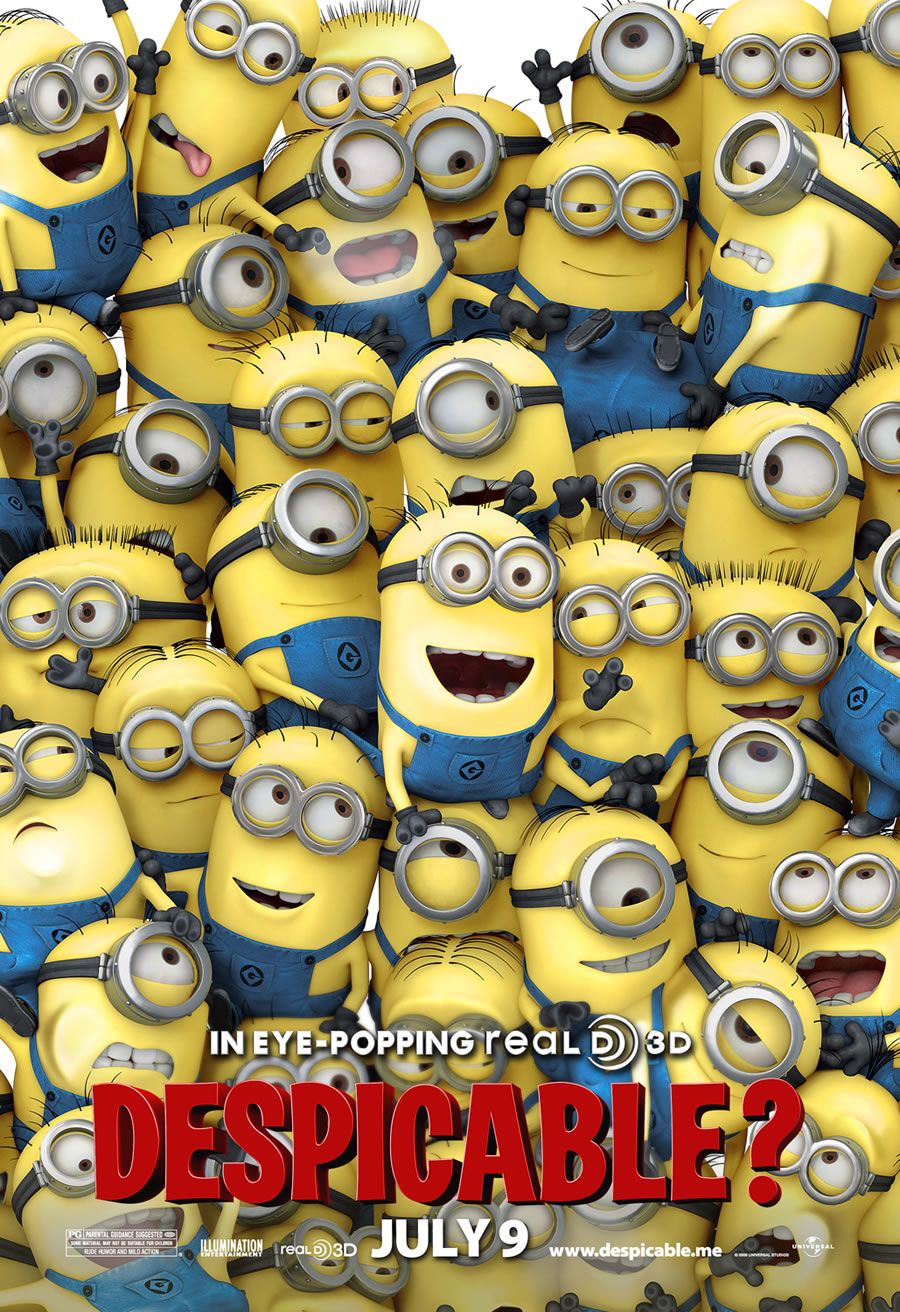 Despicable Me is a terrific little movie that hits ever beat just right. Silly, cute, funny, infused with heart. Universal Pictures and Illumination Entertainment step into the increasingly crowded computer generated animation field with this promising film that finds a good balance between the Dreamworks zany, cartoonish cartoon and the more emotionally grounded Pixar movies. It’s a cartoon through and through. It’s cast from the same hipster NBC-based pool of comedians that populate the Dreamworks movies, but Steve Carrell and Kristin Wiig are unrecognizably in character voices here, with only Jack McBrayer left to stick out like a sore thumb. I was pleasantly surprised to learn that this movie has a more clever, subtle approach than the usual beat-you-over-the-head shotgun approach of Dreamworks, proving someone other than Pixar can tell these stories.

It’s animation style favors a more cartoonish and simple look over more detail-oriented trend in animation, but like Pixar the Illumination people seem to have actually been around kids, and are able to mold their characters, particularly orphans Margo, Edith and Agnes, into behaving like real kids. From The Game Plan to Old Dogs to countless others, it’s a tired staple of family films to revolve around a bachelor who has children come into his life and warm his heart turning him away from his evil, arrogant or childish ways. Make no mistake Despicable Me is such a movie, but the relationship between Gru and the kids doesn’t take the easiest path and ultimately it all works so well because the movie genuinely earns it.

A distant cousin to Pixar’s The Incredibles, Despicable is a different spin on the superhero movie. This time it’s villain vs. villain in a game of one-upsmanship between two bad guys who want claim to being the top supervillain. Vector is a hot shot brat, Gru just wants his momma’s approval.  Despicable’s vision of the business of being a villain is it’s most interesting. There’s some spot-on adult banking satire here. The creation of both Gru and Vector’s liars are truly imaginative as are all their weapons and gadgets. I like Vector’s piranha guns and Gru’s freeze ray, the convoluted way to get to Gru’s liar stories below his house and the outrageous defense unit around Vector’s. I won’t dare give it away, but I love how far the movie takes Gru’s diabolical plan.

The movie deliriously throws stuff at us, zipping along briskly with impossibly outlandish visual gags. But it’s the script that sells it. The one-liners are smart and funny, not cheap shots, with Carrell’s accent putting the cherry on top of the laugh. The movie’s mascots and go-to laughs are Gru’s minions. Some one-eyed, some two, some tall, some short, all speak jibberish. Another movie would just have them be cute and cuddly, Despicable has them as the subject of Gru’s experiments which create some good running gags.

Despicable Me is a well-written, well made, genuinly funny and endlessly creative surprise. It’s heartfelt moments are surprisingly effective, woven well through the story instead of feeling slapped on. It’s a very promising debut film from Illumination. Highly recommended for the whole family. With How to Train Your Dragon, Toy Story 3 and now Despicable Me, 2010 is shaping up to be a very good year for animation.