Moon is the directoral debut of Duncan Jones, a science fiction thriller most similar in tone to 2001: A Space Odyssey. While I had heard great things about  this movie, I couldn’t help but be a little disappointed after watching it. Yes, it is a very good movie, and I enjoyed it, but it lacks substance. Where 2001 was a detailed study on the relationship between machines and man, Moon is little more than yet another corporations-are-bad fist pump. I felt that there was a huge opportunity to discuss the morals of cloning and what the psychological impact would be of figuring out that you are a clone, but both of these issues are barely touched on. Sam Rockwell is basically the focus of the story the entire time, and as we’ve come to expect from him, he delivers. I would say that his performance makes the movie a must-see, even if the story line or the issues explored leave a little to be desired. 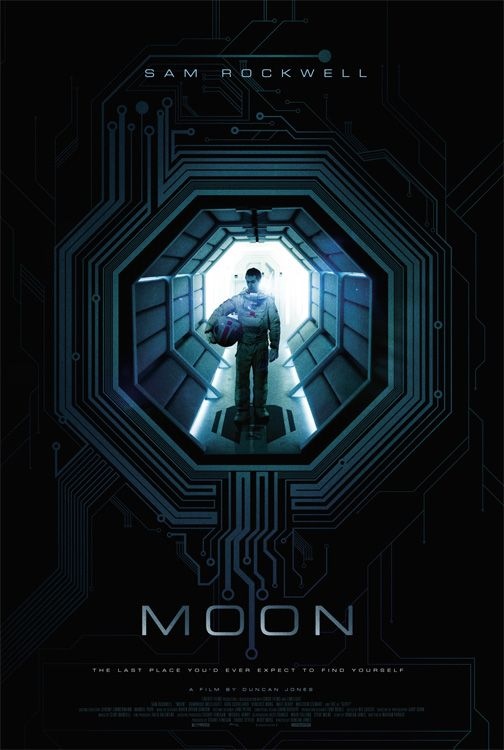 Synopsis: Sam Bell is an employee of a large corporation responsible for mining hydrogen gas from the moon as a power supply for earth. He has been given a contract to spend 3 years on the moon, alone, maintaining the base and machinery. The film opens when Sam’s tenure on the base is almost expired. He is eagerly awaiting the chance to go home and see his wife and daughter. While performing a routine unloading of a harvester, Sam gets distracted and causes an accident. Sam then wakes up to find that he is confined to the base, and a rescue team is being sent to help him. Sam finds this to be very suspicious and manages to trick the station’s computer, Gerty, into letting him go outside. Once outside, Sam goes back the site of the crash, and finds that he wasn’t involved in the crash at all. He is a clone, meant to replace this previous version of Sam in order to keep the station running. But this is something so startling to both Sams that their entire existence is put into question and that everything they thought they knew is a lie…. 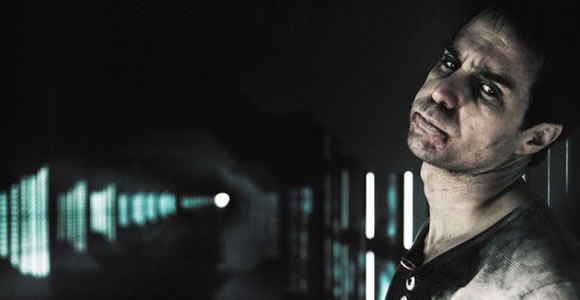 Acting: Sam Rockwell is basically the only person in the movie, although Kevin Spacy does voice the station’s computer, GERTY. Still, GERTY is little more than a useful plot device and a connection to 2001. The movie revolves around Sam, not Gerty and his AI. Fittingly the role of Sam was well cast. Rockwell plays all the various mental states and versions of the main character well, so well in fact that you can easily tell the difference when the clone appears. Rockwell is the most entertaining part of the entire film, and I feel his performance here makes the film watchable to audiences who might have otherwise been turned off by the sparsity of the plot and setting. This movie is based on the struggle of that character, unlike 2001, which does not place any empahasis on charaters, only on the existance of a human aspect to prove a point. What other characters that do appear in this film are little more than babbling heads, at times they are voices talking to Sam but not concrete persons he can interact with on a level that advances the plot. Good (24/25)

Script/Plot: A few things bothered me about the script and plot, including the way the story is vague concerning some issues. It gives hints and clues to the audience and requires you to put them together, but very little is ever concluded satisfactory. I am not saying that I want all the revelations the movie has to be given to me, but I would like to know if my suspicions were correct. The plot is rather spaced-out at times, but not to the degree of 2001 or the remake of Solaris. There are enough interesting tid bits and mysteries to be solved that you won’t necessarily be bored, but there are moments in which I felt the plot was building up to something “meaty”, only to find that your suspicions were false. Perhaps I am just so used to something always going horribly wrong in these types of movies (Sunshine, Red Planet, etc.), that I mistook the telltale signs of an evil computer or how the movie could have had an action-packed finale. Maybe it was a clever trick by the writers to use the preconceptions you have against you so that you are always engrossed in the movie because you want to see such and such happen. If so, its an effective technique, but I don’t particularly like that feeling. Okay (15/25)

Direction: Duncan Jones does a terrific job here for his debut, giving the movie a distinct look and feel. The manner in which he pulled the camera back and created a sense of spaciousness for dialogue scenes when other directors might have been tempted to use close ups gives the movie a very wide open and vast feel, despite the cramped sets and limited locations available. I can’t help but think of Alien in the way the set is designed and both the low and wide capture angles. Good (22/25)

Special Effects: The special effects also help to give this movie a feel of its own, even if the movie is not a special effects powerhouse. The way everything both in and out of the station is styled (brightly lit and sparse) is perfect for the tone. The architecture felt a little Syd Mead-1980s-ish to me (see the interior of the buildings in Avatar or Aliens), but I liked it, and it feels realistic. The music in the movie is also very good, and is not sparse as you might expect, but vivid, giving the action onscreen more dramatic flair. I think all of these small details; the music, the scenery, the set designs; definitely add to the experience of watching the movie.  Good (23/25)

You may also find interesting: Ranked: The Top 10 Most Important Movies of All Time