If you thought that Avatar was mind blowing, wait until you see Inception. Not since the Matrix has a movie been successful on so many levels. Sure, it is not as visually astounding as Avatar or action-packed as the Matrix, but it is the first film in a long time that I feel is great in every aspect. Brilliant special effects, great acting, an entertaining story, and most importantly, here is a movie that has a complex, thoughtful, and original plot. Finally. For once a blockbuster movie is not based on some comic book where such and such has to save the world from evil blank. People have been comparing it with movies such as 2001: A Space Odyssey and The Matrix in terms of its innovation and originality, and while I don’t quite agree that it is as game-changing as those movies, it is an important next step in the evolution of cinema. It’s a big budget movie that uses an intense philosophical debate to base a plot on, and not the other way around as we’re used to. Kudos to Warner Brothers for putting up big bucks to get this one done right.

And why wouldn’t they with Christopher Nolan at the helm? Christopher Nolan is one of the greatest directors of our time, noted for the way his movies have consistent quality and intellectual integrity. Inception, though, raises the bar. You see, movies like Avatar or Iron Man 2, while certainly entertaining to watch, can’t hold a stick to the ideas presented and worked with in Inception. They are like child’s play to the mature and sophisticated way Inception contorts ideas, people, and places on all levels to achieve a high degree of intellectual discussion with the audience. It’s more than just a giant mind trip, though. Nolan surrounds his central idea with action, suspense, clearly-defined characters, and especially drama, to make for a truly all-encompassing movie experience. It’s the kind of an experience that doesn’t come along very often, and the kind of experience that is for once, worth the (often exuberant) price of admission. 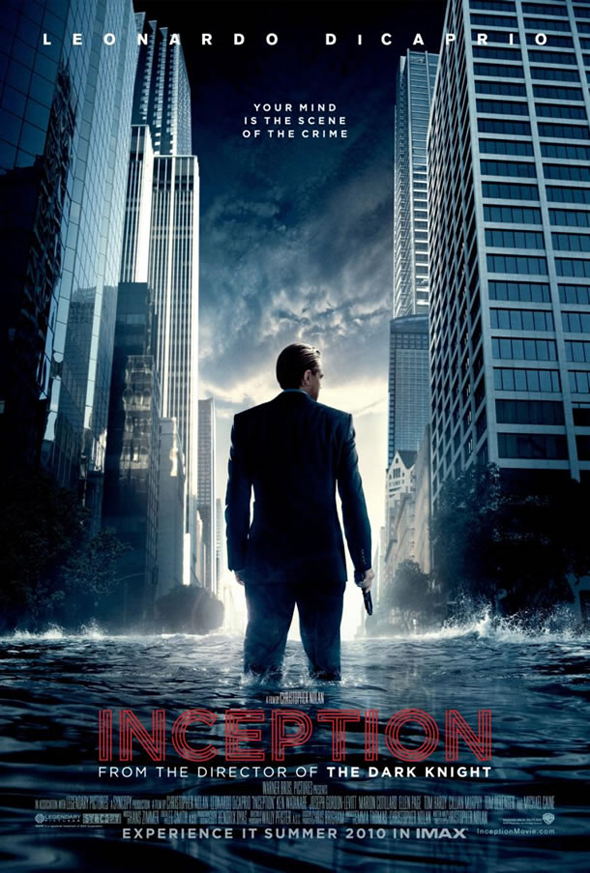 Synopsis: Cobb is a man who specializes in a unique type of thievery. He specializes in stealing peoples secrets and ideas by entering their dreams. Cobb though, is a man with his own dark past, a past that haunts him whenever he enters a dream. When a heist goes wrong, Cobb finds himself a fugitive, and in order to get out and set everything right, he agrees to do one last job. This job, though, is not going to be easy. He has to perform inception, planting an idea in someone’s subconscious, rather than stealing one. Inception, as it turns out, is very dangerous, and in order to do it, he needs a talented team. The question, though, is not if the team can get the job done, the question is if Cobb can keep control of his mind and sort out what reality means to him before he becomes trapped by his own secrets….

Acting: While there is a diverse and well used cast here, Leonardo DiCaprio is the main man. The role isn’t as involved as we’ve seen him in previous films, and I could see plenty of other big-name actors filling the role as well, but that does not deter from a solid performance. DiCaprio does bring sophistication to the film, but the supporting cast makes it shine. The stand out in my opinion was Joseph Gordon-Levitt, who although he doesn’t really have too much acting to do, manages to make his character strong and insightful. Ellen Page does well as the youngest member of the team, but it is not the type of movie that you are used to seeing her in, even if the role is a good fit for her. I am glad to see these two actors branching out from what they typically do. Tom Hardy, Ken Watanabee, and Dileep Rao are the final three members of the team, and they also are able to make their characters multi-faceted despite the small amount of screen time they are afforded. Cillian Murphy plays Robert Fischer, Jr. the target for the inception job, and is again a perfect fit, giving the audience a glimpse of the deep emotional turmoil the character is experiencing despite the solid-granite exterior persona. Finally, Marion Cotillard plays Cobb’s wife, and her character both visually and emotionally gives the movie sophistication and turmoil at the same time. Good (23/25)

Script/Plot: If Avatar was a movie made for the single purpose of demonstrating its innovative and stunning visual effects, Inception is a movie made for the single purpose of showing off its innovative and stunning story. The plot is very structured, and needs to be, in order to control the chaos, which will throw off people who prefer an organic movie that develops over time. The plot is also very detailed, and although there is only really one twist in the movie, you need to be paying attention to know what is going on. The beginning of the movie is a twisted web of confusion and exposition, presenting the background in an unconditional manner that does not pause for the audience to catch up. So if you like movies where you can easily follow what is happening, look elsewhere. But all the confusion and complications give way to a stellar conclusion, where an innovative triple-layered plot (literally) crashes back together to form a satisfying end. Fabulous execution, and refreshing to see a big movie with a completely original plot. Great (25/25)

Direction: The way in which Nolan directs this movie is similar to The Dark Night. We get lots of dark tones, a few sparse colors, close-quarters action and facial shots, and lots of sweeping camera angles. The close-quarters filming may make some people claustrophobic at times, and a few of the action sequences are difficult to discern because they are shot so close and quickly, but when Nolan wants to make a point it is clear; The quick bursts of hand-to-hand combat throughout are not the focus of the movie, so Nolan doesn’t spend as much time filming them as you would in The Matrix. Those moments in the movie where time is escaping, ARE of importance, and Nolan shows this with slow motion to add tension and create a frantic tone. Perhaps the direction is not as original as the plot, but it makes the movie watchable nonetheless. Good (22/25)

Special Effects: The special effects are seamlessly integrated, and feel very real despite the unreal images they project. This is fitting for a movie about dreams, because as the movie points out, your dreams have to feel real or else you will not pay attention to them. The zero-gravity fight scenes and structural paradoxes are a visual and dramatic delight, even if they don’t all make sense in principle to the viewer. In fact, this is one of those movies that contradicts itself a few times, but the importance of these points is small and there is so much else going on that you can easily look them over. Finally, the score of this movie is epic. It is loud, frightening, and sets the tone of the movie perfectly. Good (24/25)