Blade Runner – All those moments

“If only you could see what I’ve seen with your eyes” so says replicant Roy Batty played by Rutger Hauer in Ridley Scott’s 1982 science fiction classic ‘Blade Runner’. The film concerns a bounty hunter (or blade runners, as they are called in the film) called Rick Deckard, played with subtlety by Harrison Ford in another signature sci-fi role. Deckard finds himself set on mission to find and ‘retire’ (kill) 4 ‘replicants’ who have been declared illegal on Earth after a bloody mutiny in the off world colonies. Replicants are artificial humans in effect, with Scott deeming the term ‘android’ too generic – the films phrase brought in by the daughter of writer David Peoples, who shares writing credits with Hampton Fancher after an infamously disruptive production. The film is set in L.A., year 2019 as the city is encompassed by environmental and urban decay.

Deckard begins to question his own actions when he himself seems to fall in love with a female replicant, named Rachel (Sean Young). As Deckard becomes more and more depressed in his own life, essentially dehumanised by his actions, the rogue replicants start to take the opposite route. They have a built in 4 year life span, why I hear you ask? Well, the brains behind the organisation responsible for replicant manufacture, Eldon Tyrell (Joe Turkel) has built a machine so smart and so advanced, that they can develop their own human emotions come the end of their life span – essentially becoming more human as the film goes on, as Batty exclaims “I want more life, father!”.
This is in essence the main theme of the whole film, what is human? Where do we draw the line? Thematic complexities such as these are joint by others in Blade Runner such as life, death, global warming, globalisation, overpopulation, corporate dominance and many more, most of which are presented visually.

Speaking of the visuals, the production design is some of the best I’ve ever seen in a film, something most critics tend to agree with however sceptical they are about the films narrative. The futuristic L.A. is showered in perpetual rain, constant night, neon lit clubs and even neon lit umbrellas! The SFX are to be commended, as they further bring you into the films uniquely bleak world and make Scott’s unbelievable vision seem so much more likely. Special effects wizard Douglas Trumbull and his team used meticulously detailed models and the paintings of visual artist Syd Mead to create what I feel is the greatest futuristic vision ever put on film. From the films first shot, the appropriately named ‘Hades landscape’ looking over Trumbull’s darkly lit, smoke infested cityscape – all skyscrapers and bellowing fire – you know you are entering into something new, wholly original and most importantly atmospheric. Blade Runner is a film where the setting really can claim to be a character of its own.

Something helped in no small part by the score of famous Greek composer Vangelis, whose electronic pieces go a long way to creating the films dark, almost depressingly beautiful atmosphere.
From the melancholic ‘main titles’ at the film’s opening, to the bluesy (obviously) ‘Blade Runner Blues’ every piece of music seems to fit the events on screen, all whilst adding to the overall feel of the picture. Something not very surprising considering Scott’s claim that Vangelis would compose whilst watching the film, frame by frame responding to the characters actions on screen.

Now it seems we have come full circle in this review, as Battys’ statement at the start of this text could be attributed to the man whose vision this was in the first place – director Sir Ridley Scott. Scott is listed as director, however he dominated the art department and what you see on screen is wholly his – what he saw with his eyes will never be forgotten. Some have accused Scott of focusing too much on the visual side of things, whilst leaving the films story, character development and narrative to rot. All these however, are helped by the two writers and the author of the novel in which it’s based on – Do Androids Dream of Electric Sheep? – Philip K. Dick. Whilst Scott created the world, Dicks original themes of humanity and death still shine through, thanks in part to writers Hampton Fancher and David Peoples. Blade Runner for many reasons is a film that’s perhaps cold to the touch – the tense and troublesome film making process is well documented – however it is a film that you must, and I stress the must, watch more than once. The Shawshank Redemption director Frank Darabont describes it perfectly as a big present with many layers. The first time you watch the film you will be dazzled by the effects and stunning visuals. However, the second – third – fourth time you watch blade runner, the true genius of its deep themes and layered philosophical meanings will expose themselves to you. For this reason alone, you will never find a casual Blade Runner fan, and I myself am proud to say I have dedicated my time to this wonderful piece of art – it’s fair to say I have been awarded with the greatest present of all. 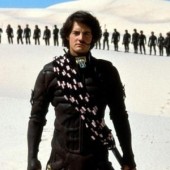 I am a 17 year old college student with an intense love for all things film. I am looking to go on to study Film at University, and hopefully to become a professional film reviewer/journalist at some point in the future. Also, my favourite film is Blade Runner.