We’ve had aliens versus predators (AVP), special forces versus predator (Predator), and cop versus predator (Predator 2). Now we get convict versus predator, guy with samurai sword versus predator, and predator versus predator. All in the same movie. Predators is the newest movie to the storied franchise, adding a new dimension but not straying too far from the formula. The film is most similar to the original Predator movie, and would have made a fitting sequel if not for the off-beat Predator 2. In fact, Predators makes no mention about what went on in that film, but in a way builds on what happened in the first one. It actually borrows quite a bit from that first film as well, but adds enough of its own to make it worth seeing. This is not another AVP debacle, but a solid and entertaining movie that does not appeal to the lowest common denominator (gore and special effects). Don’t get me wrong, there is plenty of that in this film, but neither take away from the story, which is smart and interesting with quite a few twists.

The most refreshing thing about the film though, is that it feels timeless. The movie seems like it could have been made in the 80’s as much as it could today. I’m not saying that what you will see on screen is dated. I’m saying that the way the film is put together seems more like before computers ruled everything. Instead of crafting an entire alien planet’s foilage via complicated sets or the latest computerized graphics, the film is simply filmed in Hawaii. And those predators? Yes there are a few shots where they are computer generated, but the rest of the time they are obvious guys-in-suits. In other words, its a more traditional manner of making a movie, and something you certainly do not see very often any more, especially in an action movie. Its clearly the style of Robert Rodriguez, who is producing, and I enjoyed it thoroughly. So, yes, the movie is not cutting-edge in any aspect, but is enjoyable, fun, and a worthy addition to the franchise, especially since it doesn’t take itself too seriously. Exactly what a summer movie should be, and exactly what all those other recent over-wrought action flicks are missing. 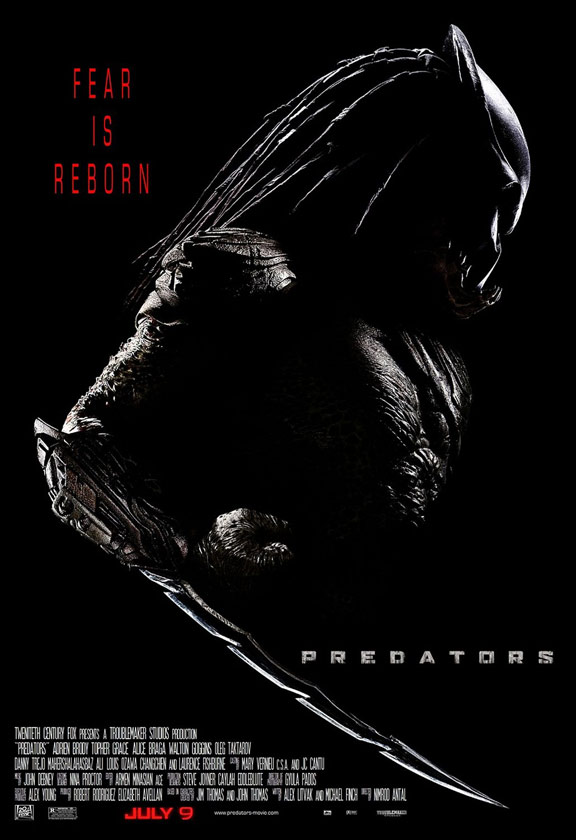 Synopsis: The Predators like to hunt, and to hone their skills, they’ve created a game preserve on a distant planet where the best killers in the galaxy are gathered. Here, a group of convicts, gangsters, mercenaries, and special forces members find themselves. They have no recollection of how they got there, only that they all woke up falling towards the surface. Of course, they soon find out that they are the prey, and in order to survive, must band together to hunt the ultimate hunters…. 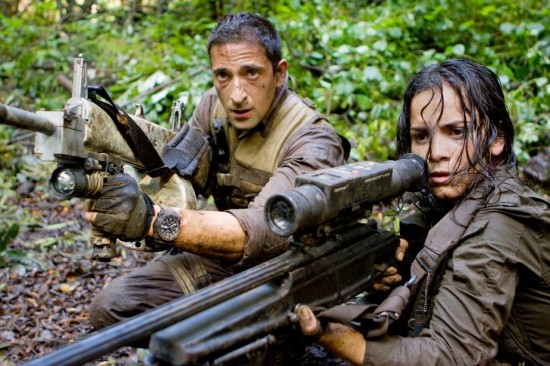 Acting: The acting is not horribly bad. A few of the lesser known actors are difficult to understand when talking, but it matches with their on-screen personas because they are supposed to be from around the world. Adrian Brody won’t win any Oscars for his gritty lead performance here, but he was surprisingly good. I would not have pictured him being a good fit for this role, but it works because he is so different from the traditional action hero. Sure, his lines might be stupid at times, but his performance anchors the movie. There are also a few other good acting surprises in the movie (which I won’t give away), and overall the cast does a fine job given the material. Good (20/25)

Script/Plot: If anything, the weakness of the movie is here. The dialogue is all cheesy one-liners and screams, but at least the actors deliver them well. Not to mention that this sort of dialogue helps give the movie its vintage feel. If the plot seems familiar, its because it is. Somewhat like a cross between Pitch Black and the original Predator movie (I have also heard it compared to Pandorum, but I have yet to see that), the plot is fairly straight forward. The movie begins slow, but is interesting enough and has enough visual impact that you are interested. Once the plot picks up there are some very good twists and turns, but everything doesn’t stray too far from what we’ve come to expect from the Predator/Alien movie franchise. But even if you consider it an entirely pointless addition to the franchise, it is still an entertaining action movie where the action scenes are not the only thing worth seeing. Okay (16/25)

Direction: Thankfully the only part of the movie that reminds you of Robert Rodriguez’s chop-shop directing style is the opening scene, from there director Nimrod Antal opens up the movie substantially, molding shots and camera angles seen throughout the Alien and Predator franchises. There isn’t too much original about the way the movie is directed, but it is done competently. I especially enjoyed how well the background scenery is captured and how it changes as the movie progresses. Much of the camera work is done on the ground, from stationary tripods peering through the brush, rather than through sweeping motions on cranes above it. To me, this seemed very 80’s, and as such, quite similar to the technique used in the original Predator movie. One thing that I did not like though, was the directors continued technique of focusing on the faces of the characters before the audience gets a chance to see what it is they are looking at. This happens at least 5 times in the movie and while it is a classical technique, I’m sure the director could have come up with something more original. Above all else though, I enjoyed the way that the director shot the action sequences, where basically you didn’t have to see what happened to know what happened. The important part of any action sequence should be the outcome, not the sequence itself, and the director seemed to understand this well. Good (20/25)

Special Effects: Although the special effects in this movie are not stellar, they never compromise the movie. This is partly because of the way the movie channels classic B-movies, so you actually welcome the almost total absence of CGI. The other reason the poor special effects are not a deal breaker, but rather enhance the movie, is the way that the movie is shot. The cameras movements (or lack of movement at times) never make anything fake to the audience. I would definitely rather see a man running around in a Predator suit than a CGI version, especially if the real version looks better. It gives the action scenes more bite, the environment seems believable, and best of all, it makes the movie more enjoyable. Gore also makes this movie enjoyable, if you are into that thing. It is tastefully done, mind you, in a realistic way, and that realism is what gives this movie its X-factor. I don’t know how long its been since I’ve seen a realistic action movie in theaters….Good (24/25) 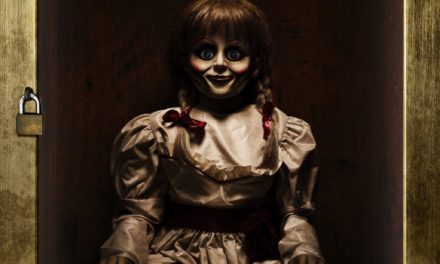